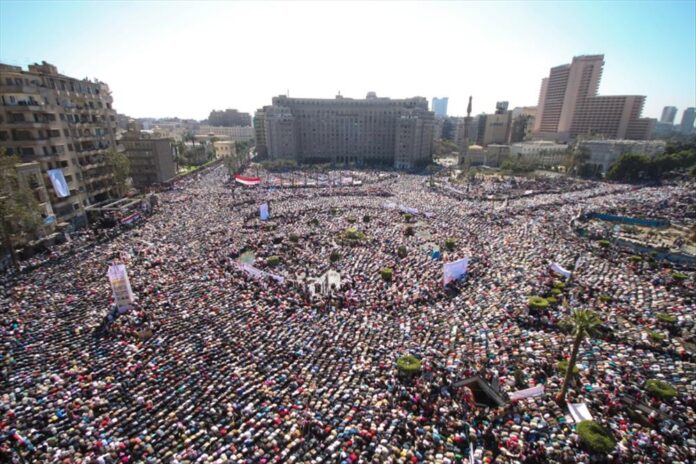 On January 25, 2011, coinciding with the Egyptian Police Day, tens of thousands of Egyptians demonstrated, calling for the dismissal of the Minister of Interior, Major General Habib Al-Adly, an end to the violations of the supposed “security men,” and that they be held to account.

The call for demonstrations began through the “We are all Khaled Said” page, a page that was established to demand justice for the martyr Khaled Saeed, who was tortured to death by police, after which the Ministry of Interior claimed that he “swallowed a package of narcotics that led to his death.” Soon, the demonstrations expanded to include all parts of the country and turned into a popular revolution that did not subside until it overthrew the head of the regime itself, President Mohamed Hosni Mubarak.

Years passed and exactly 11 years later the factors that caused the revolution are still in place. The violations carried out by security forces continue and torture has become a folkloric ritual inside police stations under the watchful eye and patronage of the regime of President Abdel Fattah Al-Sisi.

On Monday January 24, 2022, one day before the 11th anniversary of the January 25 2011 revolution, The Guardian published a video clip showing police officers torturing detainees in a police station in Cairo, which confirms the extent to which the officers are able to inflict violence on civilians with near-total impunity, and reinforces the human rights defenders’ accounts of violations that take place in places of detention under the regime, which claims to be a “guardian of human rights.”

The video, taken secretly by a detainee at Al-Salam Police Station in Cairo, shows two detainees suspended by their cuffed arms behind their backs on a metal net, while they are naked. One of the detainees says in the video: “Look how they torture us and our colleagues. They came to us and said that we are next.” Then he addresses Sisi, saying: “Mr. President, we want to ask why the police are doing this to us in Al-Salam Police Station?!”

The Guardian said that this video is one of two clips it obtained, and it is believed that it was filmed in November 2021 inside Al-Salam Police Department, and it did not publish a video in which the detainees’ faces clearly appear to protect them. The newspaper said that the second video, which it did not show, shows detainees inside a very crowded cell showing the injuries they sustained, which varied between bruises and marks on the chest and back to open wounds to the head, saying that it was police officers and investigators that inflicted it upon them.

Police violations during the Sisi era

“The Egyptian state affirms its commitment to respecting and protecting the right to physical integrity, personal freedom, political practice, freedom of expression and the formation of civil associations,” Sisi said in September 2021, during his celebration of the launch of the National Human Rights Strategy, which the regime promoted as marking the birth of a new era of human rights and freedoms. It seems that the promised new state of rights and freedoms was false, as the cries of those who are tortured in places of detention still resound everywhere, while the regime always denies the existence of torture or even arrests, and when it is pushed into a corner, it says that these are “individual cases” and not a systematic policy.

International and local human rights reports are full of testimonies of torture that the Sisi regime claims are individual. In September 2017, Human Rights Watch issued a report that included 20 cases of torture between 2014 and 2016, in which it concluded that the National Security Sector and the police of the Ministry of Interior, under the government of President Abdel Fattah Al-Sisi, were involved in widespread and systematic enforced disappearance and torture which amount to crimes against humanity.

Also in September 2017, the United Nations Committee Against Torture said that “torture is practiced systematically in Egypt, and the reported cases of torture did not occur by chance in a particular place or time, but rather are considered habitual, widespread and deliberate in large parts of Egypt. In November 2019, Amnesty International issued a report in which it said that it had documented 46 detainees being subjected to torture or other ill-treatment in police places of detention, especially in the National Security Sector (Political Security). The most common methods of torture are electric shocks to parts of the body, beatings, and suspension by the arms and legs. In October 2019, six human rights organisations issued a joint report on torture in places of detention in Egypt, documenting the death of 449 prisoners in places of detention, including 85 because of torture, during the period between 2014 and the end of 2018.

The report emphasised that “torture in Egypt has crossed the limits of the individual responsibility of its perpetrators and has turned into a state policy that seeks to tighten its grip on the public sphere. It has broken its promises about redefining the crime of torture in law in accordance with the Egyptian Constitution and the International Convention against Torture, and even prosecuted human rights activists who sought to do so.” The matter did not stop at the torture of adults but extended to children. In March 2020, Human Rights Watch issued a report documenting the torture of 20 detained children in Sisi’s prisons, using methods that included simulated waterboarding, electrocution, and beatings.

All this takes place with the complete complicity of prosecutors and judges, who refuse to even record allegations of torture or to present the complainants to forensic medicine. The rare cases that were investigated were related to the death of detainees during torture, and the convicted policemen were given reduced sentences of up to three years in prison. The paradox is that the regime continues to claim that it is the guardian of rights and freedoms, that conditions in Egypt are fine, that detainees live in hotels and not prisons, and that torture does not exist, and if it does exist, it is “individual cases.” These same allegations were repeated by the regime of ousted President Hosni Mubarak, but does denying the reality mean that it does not exist? Back then anger brewed in people’s souls until a revolution removed the entire system.