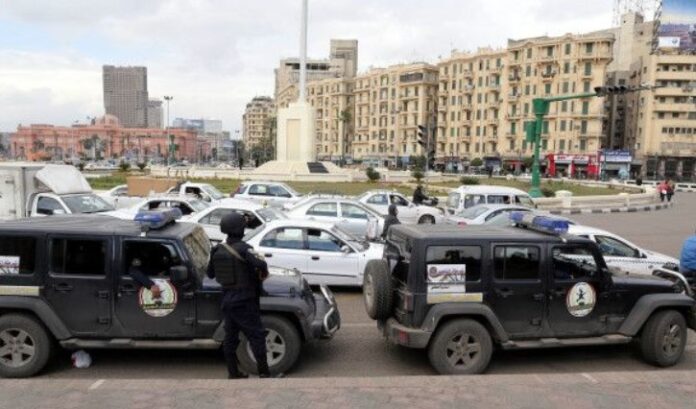 The streets in the centre of the Egyptian capital, Cairo, witnessed extensive security measures, especially the streets leading to Tahrir Square, coinciding with the eleventh anniversary of the 25 January Revolution.

The Ministry of Interior deployed several fixed and mobile security groups at the entrances of Tahrir Square, despite the absence of calls to demonstrate. Dozens of plainclothes police officers were deployed to search citizens and ask passersby, especially young people, about their destination, and look at their national ID cards, rental contracts, and what was in their bags. Police searched people’s laptops, as well as their mobile phones, looking for opponents of President Abdel Fattah Al-Sisi. Security forces stopped motorcyclists, including those who deliver orders to homes, to check their licences. Such procedures are repeated in different ways at the same time every year.

The strict measures were not limited to the downtown area only, but also included areas such as Al-Haram, Dokki, Agouza, Zamalek, Shubra, Al-Matareya, Ain Shams, and Sayeda Zeinab. The Sayeda Zainab Police Station asked owners of garages in the area to hand over copies of car owners’ licences and ID cards, according to a garage worker. The security services issued strict instructions to all cafes not to screen any matches during the current African Cup of Nations, which ends on February 6, to prevent any large mass gatherings during the anniversary of the revolution.

The Egyptian president has repeatedly expressed his fear that something like the January 2011 Revolution will take place, claiming that it was “a declaration of the death of the Egyptian state, and the cause of ruin and destruction in the country,” and that it was “the providence of God that saved 100 million Egyptians,” as he put it.

EIPR: Foreign debt soars in the absence of transparency and oversight