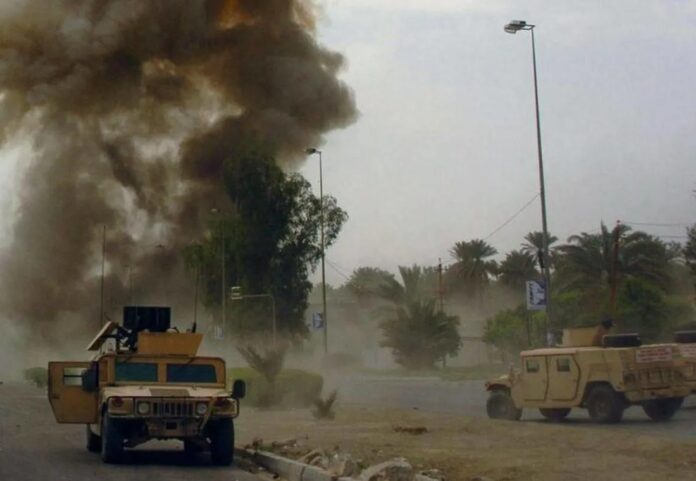 The Sinai Province terrorist organisation affiliated with ISIS has claimed responsibility for targeting a military vehicle with an explosive device in the city of Bir Al-Abed in the North Sinai Governorate, killing an officer and four soldiers. The Amaq News Agency, which is responsible for broadcasting the organisation’s media data, published a video showing the wreckage of the vehicle. Tribal sources revealed that an explosive device exploded in an army vehicle during a combing and search operation in the Jalbana area, west of the city. This came hours after the Sinai Province organisation kidnapped six citizens from the same area.

On the same day, a worker in projects affiliated with the Engineering Authority of the Armed Forces in Rafah was wounded by an unidentified bullet, and he was transferred to Al-Arish General Hospital. Unidentified random bullets have killed dozens of people over the past several years in North Sinai. The city of Sheikh Zuweid has been without electricity for three days, due to a malfunction in the electricity supply to the city, which has a population of about 60,000 people. The power outage constitutes a crisis that has been ongoing for nearly seven years, with no real solution. Dozens of citizens returned to their destroyed villages during the past few days, by a sudden decision from the Egyptian army, after a forced displacement that lasted seven years.

The Sinai Foundation for Human Rights has revealed the expansion of human rights violations in Sinai. In its first annual report for 2019 and 2020, the organisation, which interviewed 212 eyewitnesses, victims’ families, and residents, documented how war has made the lives of Sinai residents a living hell. At least 112 residents, including 25 children and 22 women, were killed, and 134 others, including 36 children, were injured by both sides of the conflict, according to the organisation.

The report addressed the suffering of nearly half a million people living in the Sinai Peninsula from historical marginalisation, and the intensification of suffering following the outbreak of the armed conflict, especially since 2014. Hundreds of residents were killed, thousands were arrested, and hundreds disappeared in the past seven years. Tens of thousands of residents have been forcibly evicted or displaced, according to the organisation.