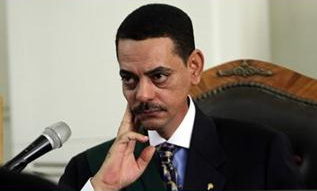 Amid a complete media blackout, the security services in Egypt arrested Counselor Sami Abdel Rahim, head of the Criminal and Supreme State Security Court in Port Said, on charges of receiving bribes to issue reduced sentences to some of the accused and possession of drugs, unlicensed weapons and some antiquities. The arrested judge is known for passing famous rulings in cases of a political nature, such as the case of “storming the Arab police station,” in which he issued life sentences against several Muslim Brotherhood leaders, including the group’s General Guide, Mohamed Badie.

From the first moment, the regime of President Abdel Fattah El-Sisi imposed a total media blackout on the case. The news of the arrest of Counselor Abdel Rahim – which is likely to have happened in the second half of last March – was not published in any of the regime’s newspapers and websites. The news was only known on April 11, when Abdel Rahim, along with 16 others, was referred to trial before the Supreme State Security Criminal Court. According to the leaks, the judge is accused of receiving bribes from several defendants in several cases to issue reduced sentences to some of them and acquittal of others. His house’s seizures were a money-counting machine, large sums of money, narcotics, three unlicensed cooking pots and some antiquities unauthorized to the public.

A judicial decision was issued to seize Abdel Rahim’s money, a large palace he owned in Fayed, a villa in the Fifth Settlement neighbourhood, and the capital of his wife and children. There are unconfirmed leaks that the accused judge’s son has been removed from the Public Prosecution Office for being incompetent because of his father. Immediately after the news of the case began to leak, the Cairo Court of Appeal issued a decision on April 14 to ban publication in all audio, visual and print media, whatever they were, a measure that the Sisi regime used to take when it came to a sensitive case concerning it.

Paradoxically, the judge accused of receiving a bribe to issue incorrect rulings had previously criticized Dr Muhammad Badie, the General Guide of the Muslim Brotherhood, for complaining that he had been subjected to injustice by accusing him of being charged in the case of “breaking into the Arab police station,” to which Abdel Rahim responded by saying: “The court does not oppress anyone.”, adding, “No one (no one) will go down with us to the grave,” then he and 11 other Brotherhood leaders and members were sentenced to life imprisonment, but fate willed that this judge is revealed. His claims of purity of hand and fear of God be revealed.

Not the first corrupt judge

The Egyptian judicial institutions do not hesitate to emphasize that they are honest, chaste and “lofty” institutions and that their rulings are independent, non-politicized, and stem from the correctness of the law. These institutions are diligent in maintaining their privileges, including very high salaries and bonuses, facilities for obtaining land, real estate, loans from the state, and above all, bequeathing their children their positions. But reality tells us otherwise. The Egyptian judiciary is poorly professional and politicized, many of its judges are corrupt, and there are dozens of cases that testify to this.

For example, in February 2021, the chief of a court in Assiut was arrested on charges of leading a gang consisting of 13 people of Egyptian and foreign nationalities for the manufacture and trafficking of drugs, as the judge took advantage of his immunity to practice his criminal activity for years. In January 2016, Counselor Wael Shalaby, Secretary-General of the State Council, the second most important judicial institution in Egypt, was arrested after being involved in cases of illicit gain and bribery worth tens of millions of pounds. Paradoxically, this bribed advisor, who committed suicide after his issue was discovered, was the official spokesman for the State Council and was responsible for the final formation of the council’s leadership positions. He also worked in the council’s technical inspection.

In November 2016, another judge was arrested while smuggling 71 kilograms of hashish (marijuana) in his car when it was accidentally discovered by a police dog that smelled drugs. They found that the judge had been involved in drug smuggling for years during the investigations. In June of the same year, the chief of a court in Alexandria was arrested for soliciting a sexual bribe to end a case before him. In July 2015, a Cairo court chief was arrested in a tourist village while receiving a sexual bribe to interfere with a case before him illegally. There are many other cases involving judges who have always claimed that they are men of justice and an example of honour and integrity. Then judicial institutions claim that they are proud and that their judges are independent.