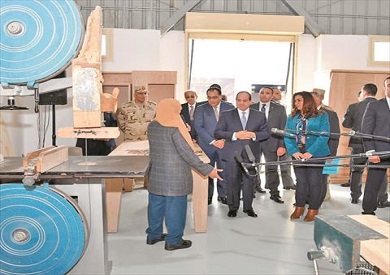 Some economists have criticized the current policies of the Egyptian government, especially those related to investment in areas that do not achieve a good return, such as some industrial cities that cost billions of pounds and export minimal production to the world and which do not significantly solve the problem of Egyptian unemployment.

Dr Youmna El-Hamaky, Professor of Economics at Ain Shams University, said in an exclusive statement that the Egyptian economy is still not able to provide employment opportunities in a way that is consistent with the demand and proportionate to the structure of the Egyptian workforce. This was recently said by international reports on the performance of the Egyptian economy. According to the economic expert, the inability to achieve tangible results in increasing the local component of the industrial sector still largely lacks diversity and integration between large, medium and small companies. This is negatively affecting the competitiveness of this sector and its possibilities of offering jobs at the governorate level, articulated with the comparative advantages enjoyed by Egypt. “We can mention the Furniture City in Damietta Governorate, where 3.625 billion pounds have been spent for its establishment on an area of 331 acres, its exports are still meagre,” adding: “there is also a need to establish incubators and industrial clusters to increase the efficiency of this industry, and this is not done scientifically. This negatively affects the performance, which also applies to the city of Al- Rubiki Leather city, which costs £7.2 billion, and Marble City in the Shaq Al-Thaaban region south of Cairo, all of which have meagre returns.”

Regarding the ability of the Egyptian government to take advantage of international economic relations, Al-Hamaky said that the analysis of the Egyptian balance of payments shows that in previous years, Egypt has significantly increased its dependence on the outside world, whether through the large deficit in the trade balance or the increase in external debt at unprecedented rates, as well as the reliance on foreign indirect investment (hot money). This has led to a decrease in foreign currency balances with the recent crisis in Egypt due to a lack of dollar liquidity.

The Central Bank of Egypt said that the country’s external debt stood at $145.529 billion at the end of the second quarter of 2021/2022, compared to $137.420 billion at the end of the first quarter of the same fiscal year, which means an increase of $8.109 billion, for just three months between September 2021 and the end of 2021. Analysts believe that the high cost of interest on Egypt’s external debt could represent a future challenge for the State’s general budget.

Economic analysts believe that the economic policymaker in Egypt has turned to excessive foreign debt to the point of becoming dependent on it. They also think that there is still no sound system for managing foreign debt in the proper scientific sense and poor management of it. Egypt has become the fastest growing country in the region in terms of external debt volume in recent years, to be more than three times the growth of Egyptian GDP, where external debt is equivalent to three times the reserves of foreign currency and four times Egyptian exports. The average per capita share of foreign debt has risen to nearly $1,000. The debt service devours 65% of the value of exports, knowing that the estimated external debt service in 2021 at 20 billion dollars, which is half of Egypt’s foreign exchange reserves.

According to Al-Hamaki, Egypt’s share of foreign direct investment is modest to a certain extent, given the investment opportunities that should have been attracted by infrastructure spending. The economic expert explained that investors always complain about bureaucracy and changes in procedures over short periods, which negatively affects the use of foreign exchange resources, which can play an influential role in training, international marketing and technology transfer. In the end, Al-Hamaqi criticized some government decisions, such as the recent decision to open bank credits, which includes the placement of total value in banks, because this decision is considered to affect significantly and negatively the creation of an investment-friendly environment, not only for foreign investors but also for Egyptians.

Egypt’s CSF: The structure of the paramilitary force that protects the...