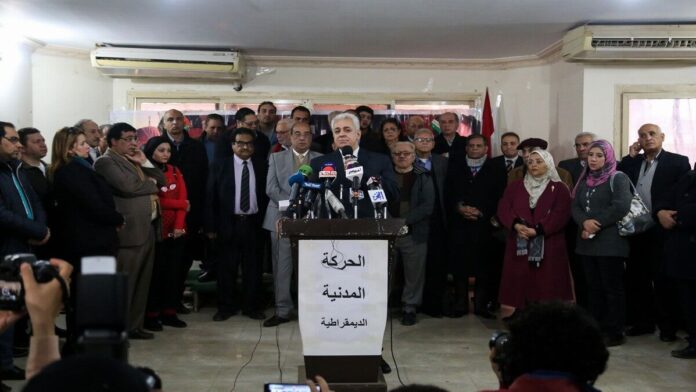 Friday, the Egyptian Civil Democratic Movement refused the proceedings of the National Dialogue declared by the National Dialogue administration. The administration had announced that they agreed to appoint the journalist and head of the State Information Service, Diaa Rashwan, as a general coordinator, and counsellor Mahmoud Fawzy as head of the technical secretary of the dialogue.

The movement said in a statement that the declaration made by the National Dialogue administration represents a unilateral attitude towards partitioning the agreements made with the action during the counselling sessions last month. The movement added that the declaration anticipated the suspended points, including the appointment of the general secretary of the dialogue. The movement renewed commitment to its 8 May statement that defined its procedural and objective conditions for a serious national dialogue.

CDM is a political umbrella gathering secular dissident forces in Egypt, including the Karama party, Socialist Popular Alliance party, Conservatives party, The Constitution Party, The Egyptian Accord party, The Egyptian Socialist party and Bread & Freedom party, as well as the public figures. Earlier, the movement had approved participation in the national dialogue called upon by Abdel Fattah al-Sisi last April but conditioned its involvement in releasing the opinion detainees as a confidence-building measure. The movement also demanded the equality in the number of representatives between the government and the dissidence and the technical secretary to be formed of 10 members with five appointees for each side. Finally, the movement demanded that public reports be published with the dialogue’s updates. The components of the movement stressed that they could not participate in the dialogue unless being a serious one with strict procedural measures and objectives.

Increase in number of health care workers infected with coronavirus