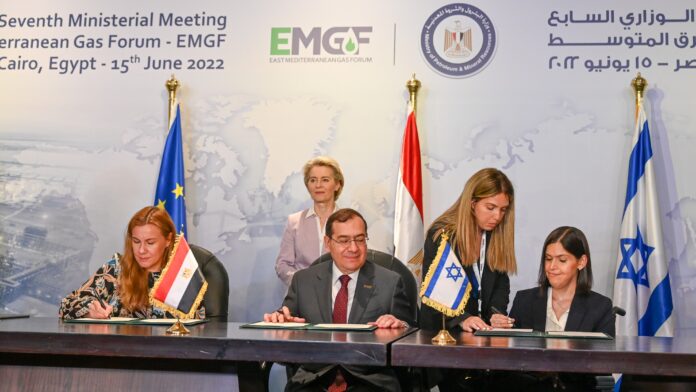 Egypt has announced that it had signed a memorandum with Israel and the European Union on cooperation in the trade, transport and export of natural gas to transport gas from Israel to Europe after liquefying it at Egyptian stations.

The European Union issued a statement saying that the European Commissioner for Energy, Kadri Simpson, the Egyptian Minister of Petroleum and Mineral Resources, Tarek El-Molla, and the Israeli Minister of Energy, Karen Elharrar, signed a tripartite agreement between the European Union, Egypt and Israel to export natural gas to Europe. El-Molla described the agreement as an essential step in building the Eastern Mediterranean Forum, which began four years ago, and as a step that can build upon achieving more cooperation among member states. Elharrar said, “The agreement with Egypt and the European Commission represents an important message for the success of cooperation under the umbrella of the Eastern Mediterranean Forum,” adding that “the fruitful cooperation enables optimal exploitation of the region’s potentials, and supports the role of Egypt and Israel as important players in the gas market.” Since 2020, Israel has been pumping natural gas to Egypt to liquefy it and re-export it to Europe.

The signing of the agreement came on the sidelines of the President of the European Commission, Ursula von der Leyen, to Cairo, and her participation in a forum meeting, after a visit to Israel. She has also pledged that the European Union will provide Egypt with immediate funding of 100 million euros to support food security.

Egyptian government admits the crisis in oxygen supplies to hospitals after...