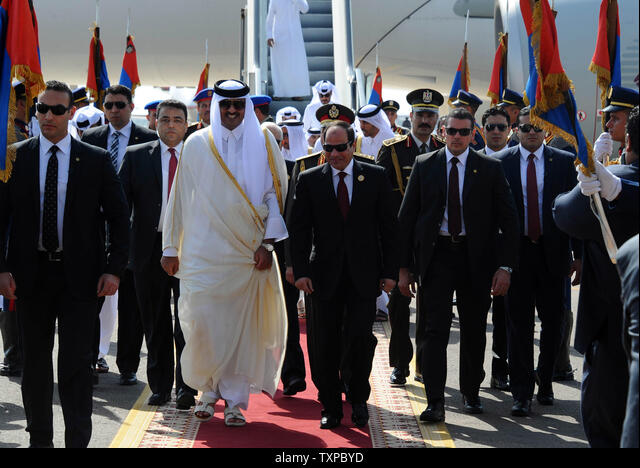 Egypt’s Abdel Fattah al-Sisi received the Qatari Prince, Tamim bin Hamad Al Thani, on the evening of Friday. The visit is the first since the cut of relations between the two countries in June 2017, which continued until the Gulf reconciliation between the Arab Quartet, Saudi Arabia, Emirates, Bahrain and Egypt, and Qatar in the Al-Ola summit in January 2021. Economic cooperation between the two countries underlay the following months until Qatar declared a plan to invest $4.5 billion in Egypt last March. The Qatari declaration came while Egypt suffered a severe economic impasse and aimed at receiving help from her Gulf wealthy allies.

The Qatari Prince’s visit came days after the visit of Saudi Crown Prince Mohamed bin Salman to Cairo. Both visits precede the US President, Joe Biden, round in the Middle East next July. According to the White House statement, Biden’s round includes Israel, the West Bank and Saudi Arabia, where he will attend the summit of the Gulf Cooperation Council plus Egypt, Jordan and Iraq (GCC+3). Egyptian independent Mada Masr quoted an Egyptian governmental source who said Saudi Arabia seeks to reshape the regional alliances to appear as the leading regional centre. Accordingly, MBS discussed with Sisi accelerating the rapprochement process with Turkey that started one year ago but was later frozen without clear reasons.

Saudi contacts with the Muslim Brotherhood, and in particular, the group’s London-based acting guide, Ibrahim Mounir, was also reported by Mada Masr. Saudi Arabia also urges Egypt to compromise with the group. The report hinted at the TV statements of Egyptian businessman and head of the Conservatives Party, Akmal Qurtam, who said Egyptian officials are already talking with the Muslim Brotherhood leaders. Saudi Crown Prince flew to Istanbul directly after visiting Cairo, where he met the Turkish President Recep Tayyip Erdogan in a historical visit as it is the first since the murder of Saudi journalist Jamal Khashoggi in the Saudi Consulate in Istanbul. In contrast, Bin Salman was accused of ordering and planning the assassination.

US administration seems to be mainly interested in forming a joint Israeli-Arab alliance against Iran. For this purpose, Israel hosted the Negev summit that gathered the US Secretary of State Anthony Blinken with the foreign ministers of 4 Arab countries, Egypt, Morocco, Emirates and Bahrain. US Assistant Secretary of State for Near Eastern Affairs Barbara Leaf said the Biden administration is promoting greater cooperation between Israel and the Arab countries other than those who established normal relations with Israel within the Abraham accords sponsored by the ex-US President Donal Trump. “We are working with a couple of other countries in the space that is not in the public domain. And I think you’ll see some interesting things around the time of the president’s visit,” she said during a congressional hearing last days. Dan Shapiro, former US Ambassador in Israel and researcher in the Atlantic Council, cleared Leaf’s statements when he expected this visit to include a road map for normalization between Saudi Arabia and Israel.

Qatari visit to Cairo talks with Turkey and Saudi new political attitude revived the address of a compromise between the Egyptian regime and the Muslim Brotherhood. But this talk came while the Egyptian government showed a hesitant and inflexible attitude toward the regime’s national dialogue with the secular opposition inside the country.

Kamal Abu Aita, a member of the presidential pardon committee Sisi appointed to study the cases of political prisoners, said there are particular wings in the state bodies that work against freedom. The governmental source quoted by Mada Masr confirmed Abu Aita’s statement when he said certain state bodies refuse to compromise with the Muslim Brotherhood. Since he took office in 2014, Sisi had shown intensive insistence on eliminating any political competitors, even those who allied with him against the Muslim Brotherhood in 2013, and even those who belong to the military, such as Colonel Ahmed Qunsowa, General Ahmed Shafiq and General Sami Anan, who were arrested in 2018, when they attempted to run against him in the presidential elections.

Regarding the Muslim Brotherhood, in particular, Sisi has not changed its discourse about them until now. And contrary to Mada Masr’s source, the political prisoners of the Muslim Brotherhood are still suffering inhumane detention conditions. However, the Egyptian regime is keen on eluding the foreign pressure, whether regional or international, to save the necessary financial aid the regime needs to face the severe economic crisis.

The Egyptian regime is also keen on showing intimate relations with Israel to keep close ties with the USA and Europe. Still, the regime does not have the same anti-Iran solid attitude as the Gulf states, so it is unlikely to go far in the US to build up a regional military and political alliance against it.