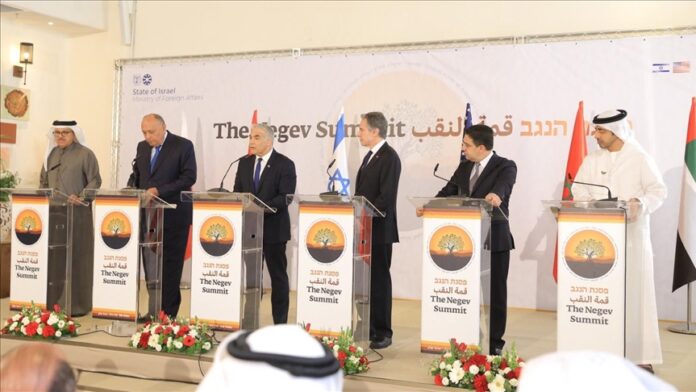 Arab, US and Israeli sources said a closed meeting took place between several Arab countries, Israeli, and American military leaders to discuss the possibility of a joint defence system coordination to confront the Iranian threat.

According to sources speaking to the American Wall Street Journal, the meeting, held in the Egyptian resort of Sharm el-Sheikh, included military officials from the United States, Israel, Saudi Arabia, Qatar, Jordan, Egypt, the United Arab Emirates, and Bahrain, last March to discuss how to coordinate against Iran’s missile and drone capabilities. According to the US-funded Al-Hurra TV channel, the participants agreed, in principle, that a rapid notification procedure when air threats are detected is implemented via the phone or computer, but not through the sharing of high-speed digital data similar to the US military. Officials also discussed how they might decide which forces would intercept air threats.

The meeting included General Frank McKenzie, the commander of the American Central Command, to which Israel was annexed along with the Arab countries last January, in addition to Lieutenant-General Aviv Kohavi, Chief of Staff of the Israel Defense Forces, Major General Fayyad bin Hamed Al-Ruwaili, Chief of Staff of the Saudi Armed Forces, and Lieutenant-General Salim bin Hamad Al-Nabit, commander of the Qatari armed forces as well as senior militaries from Jordan, Egypt, Bahrain and the United Arab Emirates.

The sources indicated that both Jordan and Egypt have long-established diplomatic relations with Israel and are already cooperating in air defence with Israel. Expanding this cooperation faces significant political challenges, especially since Saudi Arabia does not currently have diplomatic relations with Israel and is unlikely to publicly adopt an air defence alliance that includes it until in case the two countries normalize their relations. This meeting comes before an upcoming visit by US President Joe Biden to the Middle East, which will include Israel and Saudi Arabia, which invited Egypt, Jordan, and Iraq to attend the summit along with the Gulf states.

The spokeswoman of the National Security Council said the White House supports “the expansion and deepening of Arab-Israeli relations and hopes to build an integrated air defence shield in the Middle East for decades, which would link radars, satellites, and other sensors between countries in the region.” In the context of building a powerful regional air defence system, Saudi Arabia has purchased 22 US Patriot anti-missile batteries, according to a US official, and is acquiring high-altitude area defence batteries, another US anti-missile system known as THAAD.

The United Arab Emirates. It already has the THAAD system, which it says was used to shoot down a missile fired at Abu Dhabi from Yemen by Iran-backed Houthi rebels in January. Israel has the Iron Dome system and other advanced air defence systems to detect and shoot down rockets, missiles, and other threats, including short-range missiles fired by Palestinian militants from Gaza and drones launched from Iran and other countries. Later, Israeli Defense Minister Benny Gantz said during a session in the Knesset that Israel, the United States, and “regional partners” had developed an air defence alliance that succeeded in thwarting Iranian attempts to attack Israel and other countries in the Middle East, and that built this alliance built this alliance during the past year, It is already working to protect Israel and its neighbours from cruise missiles and drones.

After Ghada Wali: Intellectual thefts under official cover in Egypt