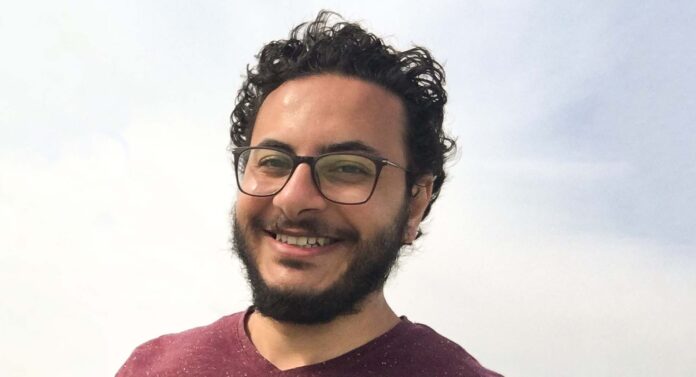 Simultaneously with the inaugural session of the National Dialogue’s Board of Trustees, a superior court sentenced researcher Ahmed Samir Santawy to 3-year imprisonment on charges of spreading false news from outside the country about the internal situation. The trial was a second one after Abdel Fattah al-Sisi aborted the first one after the court sentenced Santawy to 4-year imprisonment.

The continuation of exceptional trials for researchers based on fictitious charges related to expressing an opinion and harsh sentences to terrorize the human rights and research community throw shadows on the National Dialogue called upon by Abdel Fattah al-Sisi. While the regime presents the dialogue as an unprecedented political and human rights breakthrough, the policy says it is nothing but a big trick to ease societal tension due to the severe economic crisis in the country. Meanwhile, the regime continues its oppressive and dictatorial practices.

Ahmed Samir Santawy, 31 years, is an Egyptian researcher and a master’s student at the Central European University in Vienna. He began his studies there in anthropology and social sciences in September 2019. Santawy returned to Egypt in mid-December 2020 to take a short vacation to help him complete his master’s thesis, which revolves around “The Prohibition of Abortion in Egypt between Law, Sharia and Society”. Upon his arrival at Sharm el-Sheikh airport, he was arrested, as security men conducted informal investigations with him about what he was studying abroad before they let him go. Weeks later, on January 23, 2021, while Santawy was enjoying his vacation in the city of Dahab in South Sinai, a police force raided his family’s home in New Cairo, searched the house and asked him to come to the police station quickly.

Santawy quickly returned from the coastal city and went to the Fifth Settlement Police Station to inquire about the reason for his summons. Still, he disappeared into the cells of the National Security Agency (the Political Security Service of the Sisi regime). He did not appear until five days after his abduction, amid an official denial of his presence in the station throughout this duration. Santawy was referred to the State Security Prosecution in connection with Case No. 65 of 2021, Supreme State Security. He was charged with the usual accusations against journalists and researchers: “spreading false news, using a private account on social media with the intent to do so, as well as joining a terrorist group with knowledge of its purposes.” The renewal of Ahmed’s detention continued without releasing him or referring him to trial amid local and international appeals to remove him to complete his crippled studies.

On May 21, 2021, Ahmed was physically assaulted by an officer in Tora Liman Prison after requesting several prisoners to be allowed to console a fellow prisoner whose father had died. Santawy’s defence requested an investigation into the incident and presented his client to the forensic medicine department. Suddenly, and a day after his assault, the Supreme State Security Prosecution investigated “Samir” in a new case, No. 877 of 2021, the Supreme State Security Survey, and the same accusations of the previous point for which he was imprisoned were brought against him again “joining a terrorist group with knowledge of its purposes.” Publishing and broadcasting false news and statements that may harm security and public order. Quickly, and within one month, “Ahmed” was referred to trial in connection with the new case, and a session was scheduled to pronounce the verdict. The court decided to punish him with four years in prison in a final ruling with no appeal or cassation. It can do the only thing to file a grievance to the military governor ( Sisi or his authorized representative). The latter may decide to ratify the sentence, re-trial, or pardon Ahmed.

After human rights condemnations of “the Egyptian authorities’ insistence on continuing their approach of restricting the Egyptian academic community, and repressing researchers registered in universities outside the country,” the regime decided to bring Santawy back to court but insisted the trial should be before a superior emergency court again, to issue an unfair sentence of 3 years imprisonment for the researcher again. Santawy’s defence announced its readiness to file a grievance against the ruling, in addition to submitting a request to pardon Ahmed before ratifying the legislation, explaining that if the verdict is finally approved, he will apply for conditional release after half the period “a year and a half”, which Santawi had already spent in his prison. Ahmed Santawy is a link in a long series of researchers who have been subjected to repression and abuse at the hands of Sisi’s regime, which is very hostile to research and academic work. For example, Ismail al-Iskandarani, one of the best researchers on the security situation in the Sinai Peninsula, is sentenced to prison for ten years in a military trial for “preparing research on the demographic nature of the Sinai Peninsula.”

Another case is the young Italian researcher Giulio Regeni, who was doing a PhD on independent trade unions in Egypt when the security services kidnapped and tortured him, then claimed that A criminal gang murdered him before the Italian authorities revealed that the direct killers were four senior officers in the National Security Agency, the political security service of Sisi’s regime.