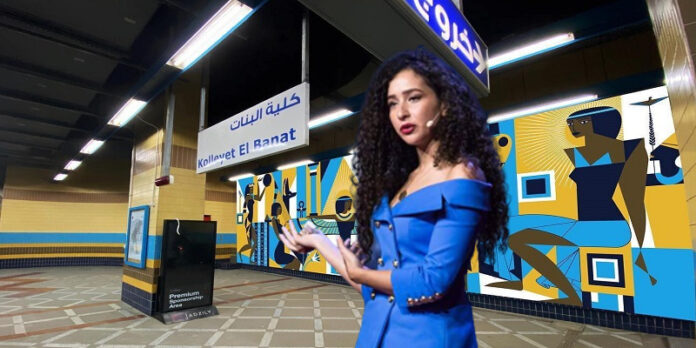 Many intellectual theft operations carried out under the guise of Egyptian official institutions were exposed over the past few weeks, which sparked sharp criticism against the government due to corruption in government contracts and assigning official projects to unqualified companies and people.

The most prominent scandals of intellectual theft recently discovered belong to the Egyptian designer Ghada Wali, whose government agencies contracted with her company, Studio Wali, to create artistic designs to be placed in Cairo metro stations. Instead of creating original designs, she stole four paintings of a well-known Russian artist, and she made minor modifications to them. Then the company placed it in the Girls College metro station affiliated with the Cairo Underground.

Some Egyptian artists discovered the crude theft, and social networking sites in Egypt buzzed with talk about it. Then soon, the Russian visual artist, Georgy Korasov, learned of the matter and accused Wali of stealing paintings from his works and using them without permission or even citing him. Paradoxically, some of the stolen pictures do not belong to Egypt. According to Korasov, one of the stolen paintings “is not about ancient Egypt, but ancient Greeks.

In the wake of the scandal, the National Authority for Tunnels and the RATP Dave Cairo Transportation Company, which operates the third line of the subway, was forced to state an apology to the Russian artist and the public and pledged to change the “illegally adopted designs”, stressing that the contract with Wally Studio says, “the designs must be original, and in the event of adaptation or reproduction, must obtain official legal approval must obtain official legal approval from the artist’s owners of those works to authorize their use.” The statement added legal proceedings are to be taken against Wali Studio.

The story of Wali’s rise and assumption of government contracts is exciting. It may indicate that she is supported by one of the influential in the regime, as her name began to emerge after she appeared as a speaker before Sisi at a youth conference in 2018 to propose the work of the “Visual Identity of Egypt” project, which aims to create a visual personality for Egypt and the propaganda and tourism promotion of it, a proposal that met with approval from Sisi, after which it began to be implemented in many governorates such as Aswan, Luxor, Alexandria and others. Wali has implemented some of these projects, which are believed to cost millions of pounds. No one knows whether this is the only “intellectual theft” or if there are other intellectual heists in the project. No one knows the criterion on which “Wali” was chosen to carry out these works, but what is clear is that efficiency is not the criterion.

Several visual artists criticized assigning the metro murals to “Wali”, while there are dozens of professors on an international level who are more worthy and capable of this work. Dr Safia al-Qabbani, the head of the Syndicate of Fine Artists, denied that Wali is a member of the syndicate and criticized the officials who assigned the project to a non-specialist in murals, stressing that mural painting is a science that has origins and a relationship to architectural design.

Scandals are no longer exceptional

A few days after the Ghada Wali scandal, another scandal emerged, but the regime did not take any position this time. The Central Bank of Egypt issued a new ten-pound currency note made of “polymer”, in line with a global trend of making currencies from polymer instead of paper because of its benefits, most notably the difficulty of counterfeiting and its long life. The resounding surprise is that the design of the new currency is very similar to the creation of the ten-pound sterling in terms of the general shape, the colours used, the font used, and the locations of the images, which made the design much weaker than the previous designs on paper and less fluffy, deep and expressive of Egypt, which aroused much discontent among the specialists who criticized blind imitation instead of relying on the Egyptian school of banknote design, which is a well-established school that spans more than a century, and has produced hundreds of stunning and unique designs.

On top of this, the Al-Rifai Mosque on the Ten Pounds banknote, a 150-year-old masterpiece, was replaced by the Al-Fattah Al-Alim Mosque, which Sisi established in the new administrative capital only three years ago. As if Egypt is a modern country that has no landmarks to put on its currency except Capital Mosque. On the other hand, pictorial artist Walid Yassin revealed that the mint stole one of his most famous paintings and placed it on the coinage without his knowledge or permission, considering that this is a frustrating intellectual theft. The irony is that all this comes at a time when the government is preparing to launch the National Intellectual Property Strategy 2022-2027, which aims to protect the intellectual property of individuals and activate their economic returns, while the first to steal intellectual property rights are government agencies.