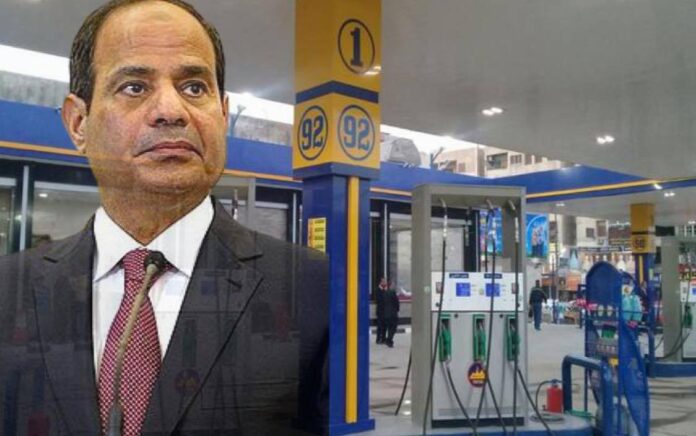 Last Wednesday, the Egyptian government raised the prices of all types of fuel by rates ranging between 5.7% and 10.25%, including diesel, which is widely used in mass transportation of people and transporting goods, which led to an increase in prices in many sectors, this is what raised public anger among citizens who are already suffering as a result of the severe economic crisis in the country.

The government justified its decision by the rise in global oil prices and the low exchange rate of the pound against the dollar to spare the state budget more burdens of subsidizing hydrocarbons to enable it to face global inflationary pressures. At the same time, the opposition asserts that the decision is new evidence of the government’s inability to find solutions to the economic crisis away from the pockets of citizens. And it will lead to a further deterioration in the standard of living and disruption of economic activity because of a rise in inflation to an unprecedented degree.

The government reviews the prices of petroleum products every three months through a committee called the Automatic Pricing Committee for Petroleum Products, which was established in December 2018 to liberalize fuel prices by linking them to international prices and the exchange rate of the pound against the dollar, to reduce the cost of subsidizing petroleum products in the state’s general budget. According to the decision to establish the committee, the increase or decrease percentage should not exceed 10%.

The new pricing decision resulted in an increase in the tariffs for most public and private mass transportation. Still, the amount of the ride tariff increase exceeded the rate of growth in the price of petroleum products by more than double in some cases, reaching about 17%, while the government cannot control matters on the ground. The decision is expected to have significant effects during the next few days, especially on food prices. It included raising the diesel price after 11 previous decisions to fix its price. Diesel is used to transporting goods of all kinds and is the fuel used to operate agricultural machinery.

According to Dina Armanios, professor of statistics at Cairo University, raising the price of diesel, in particular, has a direct impact on inflation, especially in the food and beverage sector, and this means a multiplier effect on the poor, whose spending is focused on food and drink in the first place. Armanios points out that “the increase in the price of diesel has a significant impact on the commodities subsidized within the rationing support system, which practically means a deduction from the ration subsidy, this practically means a deduction from the food subsidy, in light of the stability of the per capita monthly subsidy at the level of 50 pounds.”

The government decision faced sharp criticism from citizens, considering that it adds new burdens to their shoulders in the light of the economic crisis and the wave of inflation that the country has been going through since the beginning of this year. Clear objections have emerged in the means of transportation in protest against the increase in the ride tariff.

The Egyptian opposition attacked the decision to raise the prices of petroleum products, as deputy Diaa El-Din Dawoud said the decision “expresses the government’s inability to find economic solutions. ” Dawoud added that the government depended on financial solutions that exhausted the treasury and incurred huge debts, whose annual cost exceeded 1.5 trillion pounds. Daoud rejected the government’s justifications, saying: “The government’s rationale to justify raising the prices of everything is to compare them with international prices, and we have always told them that we have not yet reached the point of living a global life to raise the burdens to global prices.” He compared the price of a litre of gasoline in the Gulf and Egypt. and how in Egypt it is much less, according to the government’s logic, saying: “Give people an income equal to the income of the Gulf, then talk.”

Ahmed El-Sayed El-Najjar, an economist and former chairman of the Al-Ahram Foundation, criticized the government decision stressing that when the pricing of a commodity is left in the hands of the socially responsible government, it does not raise the price just because the price rose in international markets under the pretext of taking the opportunity return. Still, it considers the ability of the different segments of consumers to bear the new prices. Najjar added the government has to look at wages because when energy prices rise, the prices of all goods and services increase, and it is a mistake to keep wages fixed. Suppose salaries and pensions do not rise, then, according to Najjar. In that case, any rise in prices caused by energy means deterioration of purchasing, with new segments of lower middle classes slipping into the ranks of the poor.

The Justice Party condemned the government’s decision to raise fuel prices. The party said in a statement: Egypt is going through difficult economic conditions, resulting from the rise in the prices of many strategic commodities, including fuel prices, significantly the increase in the prices of gasoline and diesel, and raising diesel prices, in particular, will cause prices of all goods and movables to rise, which exacerbates the current wave of inflation.

Egypt between over 2.5 million tons wheat deficit and shortage of...