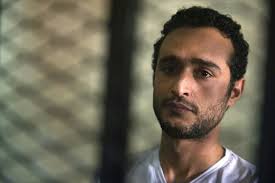 Journalist Nourhan Hefzy said that her ex-husband, imprisoned political activist Ahmed Doma, was assaulted by the head of the Tora Prison, adding that his family demanded the official authorities investigate.

Muhammad Doma said that his brother was physically and verbally abused because of his demand that his cellmate, researcher Ahmed Samir Santawi, be transferred to the prison hospital after suffering a respiratory crisis.

Lawyer Khaled Ali said that Doma informed his family during their visit to him on Sunday that he had been assaulted. Security forces arrested Doma in December 2013 for demonstrating against a law restricting the right to assembly. He was sentenced to three years in prison. Before the expiry of his prison term, Doma was sentenced in another case to life imprisonment and a fine of 17 million pounds. Doma’s lawyer appealed the verdict and retried the trial, and he was sentenced to 15 years in prison and fined 6 million pounds.