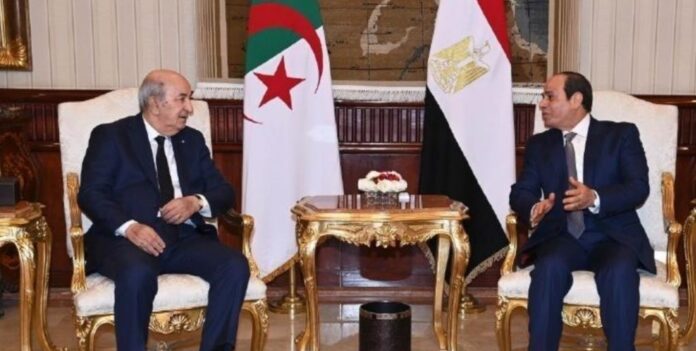 The Egyptian-Algerian relationship has recently witnessed severe disturbance on top of their different situations from the Libyan issue. While the Algerian President Abdelmadjid Tebboune supported the National Unity government of Abdel Hameed Dbaiba, Cairo preferred Dbaiba’s competitor, Fathi Bashagha, the candidate of the outgoing house of representatives in Tobroq for prime ministry.

The dispute reached the international halls after Emirates refused the appointment of the former Algerian foreign minister, Sabri Boukadoum, as the UN Missionary to Tripoli, according to UN Secretary-General Antonio Guterres. The refusal was said to be agreed on between Egypt and Emirates, who previously objected to the incumbent Algerian foreign minister, Ramtane Lamamra. The disruption doubled after Algeria engaged in the mediation attempts regarding the Palestinian national division between Fath and Hamas, an issue Cairo sees as an entire field of influence.

According to official sources that spoke to Egypt Watch, the General Intelligence Service, Egypt’s organ to manage the Palestinian file, responded by inviting a delegation from the Hamas division in Gaza, headed by the notorious leader Mahmoud al-Zahar, whom the Egyptian Intelligence had previously to meet with. During the meeting with Zahar, the Intelligence officials renewed the Egyptian promise to fund Gaza reconstruction and ease the travel of Palestinian through Rafah Crossing. The complicated captives exchange deal between Hamas and Israel was also discussed as the Egyptian Intelligence prospects to sponsoring such value as an astonishing achievement proving the vital Egyptian role in managing the Palestinian-Israeli conflict can be used to promote the Egyptian regime’s position, domestically and internationally alike. After the meeting, Zahar appeared on Al-Aqsa TV, the mouthpiece of Hamas, and stated he discussed with the Egyptian Intelligence the critical economic and security situation in Gaza. “The meeting was positive, and we will see a mitigation of the travel and promotion of the mutual trade soon,” Zahar added.

Meanwhile, the Intelligence-sponsored tourist agency, Hala, said it would work on alleviating the transportation of the Palestinian travellers through the crossing. “According to President Abdel Fattah al-Sisi’s instructions, and within an initiative to ease the burdens and sufferings of the Palestinian travellers during their round trips through Rafah Crossing, Hala for Tourism Consultancies and Services is to transport the travellers by air-conditioned buses at low prices,” said the company in a statement. The Egyptian-Algerian dispute is not expected to go far beyond the Libyan conflict. Both countries are keen on avoiding further regional disputes, which could threaten their vulnerable economic and political conditions.