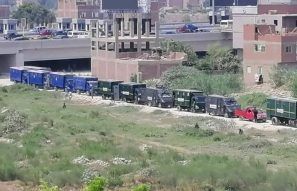 Once again, the confrontations started between the Egyptian police forces and the residents of the Nile Island of Al-Warraq, which the Sisi regime has been trying to evacuate from the population for several years as it is one of the most important ambitions of the allied Emirati government—coincided with a visit from the President of the Emirates to put more pressure on this file. Massive police forces stormed the island for several days in a row in an attempt to raise the measurements of the number of houses, according to government allegations, during which they arrested 14 residents of the island, then stopped 23 others later, as well as beating the residents, and firing tear gas against the people who gathered in solidarity.

The Egyptian police stormed the island in July 2017, killing one of the residents and arresting dozens. Thirty-five of them are still being tried. The recent confrontations were characterized by increased violence as the people surrounded the security forces after they ran out of ammunition. This was followed by negotiations Between the two parties for several hours. Reached an agreement, in the end, the forces would leave the island in exchange for releasing some detainees from the residents. The successive attacks by the Egyptian government on the island’s residents come to evict them, including homes, schools, and other buildings, in preparation for the acquisition process by the UAE, which started the process of building investment projects on the lands that the government succeeded in seizing from its residents in exchange for inadequate financial compensation.

The Egyptian Minister of Housing, Assem Al-Jazzar, said that the plan to develop Al-Warraq Island includes, at the current stage, the construction of 94 residential towers, comprising 4,092 housing units and commercial service and entertainment centres. They will do this under the name “Horus Island Project,” which will also include “Marina Horus” on an area of ​​50 acres and “Marina Horus” towers on an area of ​​230 acres, in addition to hotels, business centres, and commercial centres. Coinciding with these events, the President of the UAE, Mohammed bin Zayed, arrived, received by Egyptian President Abdel Fattah El-Sisi in the city of El Alamein, where they discussed Emirati investments in Egypt, especially the Warraq Island project, according to Egyptian press sources.

The UAE plans to acquire Egyptian real estate and investment assets when Cairo falters in its economic crisis. Still, some of these deals have faced difficulties in completing, such as the acquisition of the governmental Madinat Nasr Housing and Development Company and the Watania company for gas stations of the armed forces. In addition to the Al-Warraq Island file, which has been pending for more than five years.

The Al-Warraq Island file is a link in a long series of violations by the Egyptian government to forcibly evict residents from their homes and lands to sell them to foreign investors, which was repeated with the people of the Maspero Triangle, Al-Qursaya Island, and others. Article 63 of the Egyptian Constitution stipulates that “the forced and arbitrary displacement of citizens in all forms and forms is prohibited, and violating this is a crime that does not have a statute of limitations.”

Due to economic conditions illegal excavations are doubling in Egypt