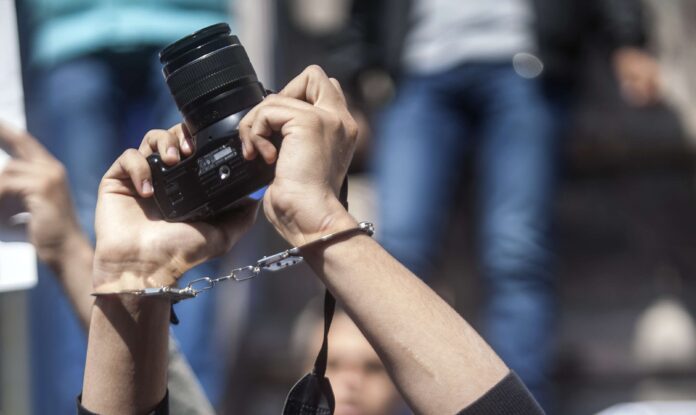 The deterioration of journalists’ conditions in Egypt started when Abdel Fattah El-Sisi al-Sisi took office in 2014. Then onwards, the general decided to hold the press and media under a tight grip, keeping journalists who broke the regime’s red lines under threats of arrest and abuse.

Donia Samir Fathi, a freelance journalist and tour guide, was arrested last May after posting a video on Facebook complaining she had been harassed by Major General Khaled Fouda, the governor of South Sinai, after refusing his proposal to make love with her. Considering Fouda is the father-in-law of Sisi’s daughter, instead of investigating Donia’s accusation against Fouda, the National Security Agency arrested her and charged her with joining a terrorist group and spreading false news. Another similar story is that of Sherin Shawky, a journalist at Al-Rafidain TV. Sherin was arrested on May 26 after she spoke out on Facebook that she was harassed by a police officer who sent her sexual pictures. Shawky said the officer threatened her and her husband with death, and she appealed to Sisi to intervene to stop the harassment she was subjected to. Like Donia, Sherin and her husband were arrested and prosecuted. Mohamed Fawzi Massad, a journalist of Al-Diyar, was arrested on May 15 on charges of joining a terrorist group and inciting a terrorist act after he criticized, on Facebook, the Egyptian Family Breakfast Party, the event in which Sisi invited to a national dialogue. This is the second detention of Massad, as he had previously been arrested in December 2018 on the exact charges. The fourth is Mohamed Sabry El-Desouky, a freelance journalist who was arrested last June on charges of spreading false news on Facebook.

The Arab Media Freedom Observatory has monitored the increase in the number of journalists detained in Egypt’s prisons to 57, including 42 in extended pretrial detention and 15 sentenced. In parallel, 14 journalists were dismissed from Roayah News without prior notification or indemnity. The journalists had worked in the network for periods ranging from 5 to 10 years, and their contracts were still valid. So, the journalists decided to file a lawsuit against the network.

Mahmoud Yassin, a dismissed journalist, said the foundation suddenly informed him and his colleagues that they were laid off even though their contracts would not expire until May 2023. Amicable attempts to resolve the dispute failed, so litigation was the final choice. Yassin emphasized he and his colleagues are only claiming their dues provided by the Egyptian Labor Law (law 12 of 2003) that, including the value of two months’ salaries for each year since the beginning of the service, the wages for the remaining ten months until the end of the contract, and appropriate compensation for dismissal without prior notice following the legally prescribed period, in addition to the balance of the remaining vacations. However, the foundation refused to give the dismissed anything or to compromise a settlement. What happens with those detained or dismissed journalists is not individual cases but rather a part of systematic abuse of journalists in the age of banned press. This appears with the recent complaint filed by the state-sponsored Nation’s Future party against Mada Masr news website after the latter reported financial corruption inside the party. The complaint is a new episode in attacking the independent press in Egypt after the state monopolized the main media outlets through the Intelligence-owned United Media Services.

The enemy of the Arab people: Why do the people of...