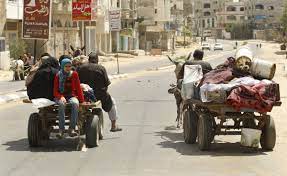 The Egyptian government began demolishing buildings in the Al-Raisa area on Al-Arish, North Sinai coast. The decision issued by Abdel Fattah al-Sisi allocated the 541 acres of space around Arish Seaport to the armed forces for developing the port.

While bulldozers and heavy demolition equipment removed dozens of public and private buildings under police supervision and security cordon-offs, notified inhabitants to vacate and leave their homes within only two days.

In July 2019, Sisi assigned Arish Seaport development to the armed forces, with 371 acres of land surrounding the port allotted to the army for “development work”, with the Suez Canal Economic Zone General Authority to finance and implement the development, management and operation of the port. The plan to develop and expand the port later swallowed up the entire coast of eastern Al-Arish, starting from the old port to the area of ​​Al-Sakaska, the last village on the east part of the city. This includes the coast of the Al-Raysah area, the most prominent tourist area in Al-Arish, as it contains many villas and residential buildings overlooking the seashore.

The area’s residents numbered about 4,000 families, tried to communicate with the official authorities, led by the governorate officials, to stop the project and discuss alternative solutions to demolishing their homes. They also organized field and electronic protests to convey their voice to the Presidency of the Republic. This did not bring any results. On the contrary, Sisi decided in October 2021 to expand the area allocated to the army to 541 acres, an increase of 170 acres. Despite the objections and refusal of the residents, many committees inspected the houses in the Al-Raysah area in preparation for compensating their owners. Still, according to many testimonies, the process of removal and demolition began without giving the residents compensation or informing them of its value. Kamal Hamada, a resident of the area, who owns six chalets overlooking the coast, said in press statements that he and the residents of the region rejected the idea of ​​compensation in the first place, despite that none of the official authorities told them the value of the compensation. This was confirmed by a second source who pointed out that everything related to compensation, whether alternative apartments or lands, does not exceed the conversations circulating among the residents without the presence of anything official by the governorate.

The story of the people of the area surrounding the port of El-Arish is a sad, recurring story, as the Sisi regime has used its legislative and repressive tools to control what it wants from the land and expel its owners without any regard for their fate. This happened in dozens of regions throughout the republic; On Warraq Island in Giza, in Almaza and the Sixth and Seventh Districts in Cairo, and the al-Max and Dekheila areas in Alexandria.

“What is raised is that there is forced eviction. The state did not do this in any of its projects. ”

Forced eviction is “the permanent or temporary removal of persons, families and local communities, from the homes and land they occupy against their will and without appropriate forms of legal or other protection and access to protection.” This definition fully applies to what is currently happening around Arish Seaport, Warraq Island, and other places. The government removes residents from their homes and lands against their will by laying pressure on them through illegal manners and without giving them appropriate compensation. The government harnesses its mighty media machine to justify forced eviction decisions under posters of “development” and “elimination of slums”. It claims that those who are being expelled receive huge appropriate compensation. In December 2018, Leilani Farha, the UN Special Rapporteur on the right to housing, condemned the forced evictions and home demolitions in Egypt, “I am shocked that after my mission, several families from two communities I visited have suffered forced eviction contrary to international human rights law.” Farha reported, “did not provide adequate notice to victims, compensation, or new accommodation. Security forces also allegedly used excessive force against residents when they refused to leave their homes.”