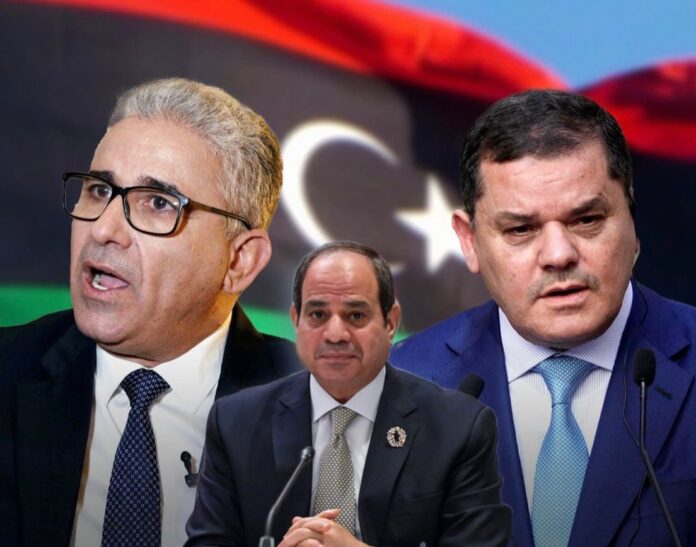 Two weeks ago, violent clashes erupted in Tripoli between the forces of the Government of National Unity headed by Abdel Hamid Dbaiba and the armed forces siding with the ex-interior minister, Fathi Bashagha, who was assigned by the Libyan parliament that is based in the west of Libya to form a new government. Clashes killed 32 and injured 159, according to the official declaration by the GNU that holds the ground in Tripoli. This was not the first clash between the two sides, as it was preceded by a similar episode last May when Bashagha attempted to enter the capital, Tripoli, to take office from Dbaiba. Although the civil conflict has not stopped in Libya since 2014, this time shifts the conflict that used to be between the forces of the east and those of the west into a conflict between armed forces in the east that has fought until 2020 shoulder in the shoulder against the west’s forces.

The everlasting conflict in Libya with the recent complications presented a new challenge to Egypt that sees Libya’s stability as a critical element of Egypt’s national security and economic well-being. After Egypt handled a clear-cut division between east and west, it now confronts a war of everyone against everyone, with armed militias and warlords manipulating the tumultuous political scene.

The lesson of the first civil war

The Libyan civil war started in 2014 between the National Salvation Government, which the first-elected parliament, the General National Congress, formed, and the Libyan government of Abdullah al-Thani, created by the parliament that was elected in 2014 and convened in Tobroq after the forces of Tripoli refused the results and the Supreme Court in Tripoli delegitimized it. NSG, headed by Omar al-Hassi and then Khalifa al-Ghawil, was supported by the Justice and Construction Party (JCP) of the Muslim Brotherhood in Libya. Militarily, NSG depended on a union of Islamic militias known as Fajr Libya and the support of the pro-Islamist regional forces, Turkey and Qatar. On the other side, the Tobroq parliament allied with the militia of retired General Khalifa Haftar, known as the National Libyan Army, and received support from Egypt, Emirates and Russia. In 2015, an UN-sponsored political agreement was concluded in Sakhirat in Morocco, where the east forces recognized the parliament. The parliament accepted a supreme state council headed by Khalid al-Mashry from the JCP and a National Accordance Government governed by Fayez al-Sarraj.

The new NAG was not on the same page with the Islamists, but Haftar’s serious ambition to take power tightened their ties with Turkey and the Islamists of Tripoli. In April 2019, Haftar decided to end the conflict with a resolved campaign to take west Libya. The movement rapidly reached Tripoli, but Haftar failed to enter Tripoli for over a year. The only significant result of Haftar’s campaign was bringing Turkey into Libya through direct military intervention and agreements with the Libyan government. Egypt found itself hated in west Libya and needed to protect its influence in the east from the advancing Turkish-Libyan alliance. Indeed, the advance of the westerns stopped at Egypt’s Sirt-Gafra red line, but Egypt knew it was not wise to engage in a civil fight or to wait for a military solution to the conflict.

The formation of a new Libyan landscape

The new balance state took all the parties to Geneva late in 2020 and early 2021, where they voted for a new transitory government and presidential council in UN-sponsored meetings. Despite historical accordance between Bashagha, the mighty man of west Libya who has strong ties with Turkey, and Aguila Saleh, the speaker of Tobroq parliament who has strong links with Egypt and Emirates, they failed in the voting for Abdel Hamid Dbaiba, who became the head of the new GNU, and Mohamed al-Manfi, the head of the recent presidential council, with Abdullah al-Lafi, from the Muslim Brotherhood, as the vice president of the council. The transitory ruling was supposed to lead to presidential elections in December 2021. The proceedings of the elections started with all Libyan figures running for the position. Still, legal disputes between the government, the parliament and the court over excluding some candidates led to a deadlock, and Dbaiba decided to postpone elections. The decision ended the Geneva process, and the parliament assigned Bashagha to form a new government.

The scene turned upright down. The years of civil war made Libya a field of several militias with new clear identities or lines of political division. All that is, there are warlords ready to side with any opportunistic political side to achieve short-term individual interests. In Tripoli, militias of Zanten (southern Tripoli) under Osama al-Juwaili and 777 battalions under Haitham al-Taguri fought with Bashagha against the semi-official forces that decided to side with the GNU, and the Nawasi militia (Islamist group) engaged in the fight with Bashagha’s side. Some militias themselves opposed Bashagha when he attempted to eliminate their influence, then the interior minister.

All alliances were distorted. Intelligence Online reported a meeting between Dbaiba and Haftar in Dubai to ally against the Aguila-Bashagha front. Qatari Arab supported the news pointing out that Dbaiba appointed Farahat bin Qadara, a friend of Haftar, as the head of the National Oil Corporation, the most critical Libyan economic authority. On the other hand, Dbaiba is still keen on keeping in contact with Ankara, which he visited a day ago and met with Turkish President Recep Tayyip Erdogan. Qatari Arab, however, said Ankara could prefer its old man, Bashagha, especially if he got the support of Abdullah al-Lafi.

Will Egypt repeat the mistake?

Egypt was among countable countries that recognized the Bashagha government against the international institutions that kept their recognition of the GNU. The Arab League refused Bashagha’s demand to represent Libya in the League’s ministerial meeting, especially with Libya heading the current convention. The Egyptian delegation headed by FM Sameh Shoukry withdrew from the session, protesting GNU’s FM Najlaa el-Mangoush to head the session. Egypt’s relationship with Dbaiba’s government was disturbed in September 2021 when a Libyan official leaked a record of the meeting between Dbaiba and Egypt’s PM Mustafa Madbouly about a financial dispute between Libya and a Kuwaiti corporation before the Egyptian courts. Such tensions between Egypt and Dbaiba could repeat the Egyptian fault of siding with a Libyan side against the other, distorting the Egyptian ties with the neighbouring country if the other side took over.

Is the Egyptian-Sudanese maneuver a prelude to strike the GERD?

The second filling of the Renaissance Dam: A new problem for...