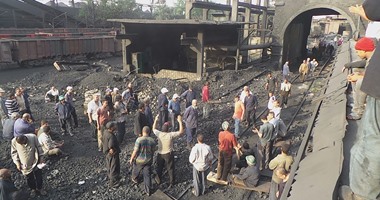 The extraordinary general assembly of Nasr Coke Industry decided last Monday to liquidate the company’s business, nearly 62 years after its establishment, to become the fourth state-owned industrial enterprise to be liquidated since 2018, despite the profits it made over the past few years.

The decision came after years of systematic sabotage of the company that began by cancelling the company’s development plans, stopping the import of coal, failing to develop batteries to match the requirements of the environmental acts, and charging the company with substantial unnecessary expenses. In parallel, the company’s shares in Helwan Fertilizers Company, amounting to about 10%, were sold to an Emirati investor. The same investor obtained another 10% from the Holding Company for Metallurgical Industries by direct order and 5% from the Social Insurance Authority, bringing his total share in the promising company up to 25%. The trade-unionist and labour expert, Kamal Abbas, criticized the deal, “the state goes now to either liquidation or sale, nothing else is offered.”

Nasr Coke Industry was established in 1960, but production began in 1964 with one 50-furnaces battery and 328,000 tons of the annual output of metallurgical coke. The second battery was established in 1974 with the same capacity, the third started in 1979 with 65 kilns and 560 thousand tons, and the fourth in 1993 with the same power as the third, so the production capacity of the four batteries amounted to 1.6 million tons.

The company includes four plants: the coke plant, the tar distillation plant, the nitrate plant, and the multi-purpose unit. Three berths for the company products are also there, one in Alexandria seaport for coke and coal with a capacity of 45 thousand tons, one in Dekheila seaport in Alexandria also for unloading coal with a total of 100 thousand tons, and the last on the Nile River to receive boats with loading and unloading rate of about 4000 tons daily.

The company produces coke of various sizes, benzene, ammonium sulfate 20.6% nitrogen, pure porous ammonium nitrate, polar tar, naphthalene, sodium sulfonate colourant, crude tar, creosote oil and many other products used in the agricultural, industrial, mining, chemical, construction, military production and scientific research fields. This production provides the requirements of the national strategic industries and sends exports to Europe, Asia, America and the Arab countries. For example, the company’s nitrate plant produces 33% nitrate, which is used by Factory 18 for military production, according to a deal worth 100 million pounds. It also has between 5,000 to 6,000 tons of dilute nitric acid used in different industries and distributed to more than 100 customers, in addition to ammonia and nitrate. Most of the sugar factories in the country, some casting factories, and several other industries are based on coke produced from Nasr Coke, which means liquidation threatens these industries strongly and may push them to import from abroad, which burdens their budgets and menaces provision of necessary inputs.

The government justified the decision with “severe losses and the futility of development,” while the company’s financial reports confirm it achieves significant profits despite working with only 25% of its capacity. The company earned 114 million pounds in net earnings from the beginning of July 2021 until the end of April 2022. Sales during the same period amounted to 613 million pounds, with no accumulated debts and regularly paying the financial dues to its 1,169 workers. Achieved these large profits despite the Ministry of Business Sector and the Holding Company for Metallurgical Industries policies that went against Nasr Coke Industry, such as the decision to stop coal imports and refusing development o comply with the requirements of the environmental acts.

The Holding Company for Metallurgical Industries cancelled more than one plan to develop the batteries, the latest of which was in 2018 when it contracted with the Ukrainian Fashmash to develop battery I and to build a new battery in a $100 million deal. The unreasonable cancellation cost Nasr Coke a $9 million fine. Besides, sources from the company said the government intended to charge the company with unnecessary expenses by appointing a large number of consultants as well as hiring contractors from outside, in addition to gradually reducing production during the past five years from an average of two thousand tons per day to average 30 tons per day, what had, of course, hiked the cost and led to losses. Even if the company made losses last year, this does not mean liquidation, laying off the workers, and national loss of one of its industrial fortresses. Instead, it was required to support and develop the company to enhance its existing success. But this is not a part of the current government plans, which seek quick revenues from selling assets to pay off the governmental spiking debt.

Corruption in the Egyptian health sector has no end