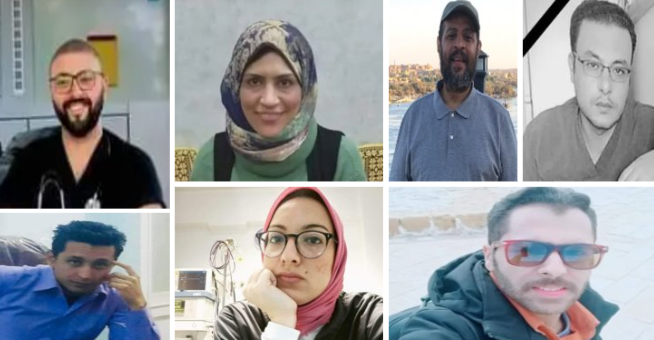 Egyptian Medical Syndicate started to speak out about the recurrent burnout deaths of young doctors in Egyptian hospitals and clinics. The member of EMS and rapporteur of the syndicate-ministerial committee, Doctor Ibrahim El-Zayat, said to Al Masry Al Youm that the syndicate has recently recorded a sharp hike in young doctor deaths. Zayat’s statement was confirmed by another statement from Doctor Ehab Attaher, a member of EMS and its former secretary-general.

Speaking out came after the past month had witnessed recurrent deaths of below 40 years old doctors while working without significant health problems or accidents. In mid-August, EMS mourned Doctor Nabil Adel Sedar, resident surgeon at Benha University Hospital, who died while preparing to undergo surgery. Two weeks later, Doctor Nora Al-Abd, obstetrician and gynaecologist, passed away in his clinic in Menoufia. The same scene recurred; Nora suddenly fell ground before conducting a Caesarian delivery losing their life out of the blue.

September started with the death of Doctor Ahmed Mohamed Hassan, assistant teacher of obstetrics and gynaecology at Assuit University. Hassan died while working in a private hospital. Days after Hassan, EMS mourned Doctor Mohamed Zine El Abidine. The young internal medicine consultant was the founder of the intensive care unit in Kom Ombo Hospital. Zine El Abidine passed away while working in his private clinic. These were the cases declared on social media and press, while other issues passed away in silence, as in the case of a young obstetrician on 6 October City, who died while on duty, leaving a family of two kids and a young wife.

These deaths occurred over two or three weeks. Still, the entire year witnessed no fewer rates of young doctor deaths, including Doctor Mai Rafe’, a resident anaesthetist in Damnhour Cancer Institute, who died inside the operation room. The same scene happened with Doctor Ahmed Samir Arafa, a 33-year assistant teacher of surgery at Menoufia University, who passed away in June while working inside the operation room. Earlier, Doctor Raafat Desouky, obstetrician and gynaecologist, passed away in Al Galaa Hospital in May, and in March, Doctor Mohamed Ali Sallam, resident intensive care specialist in Shorouk Hospital, died.

An iconic case was Doctor Mohamed Mamdouh, assistant teacher of obstetrics and gynaecology at Menia University. “Slept 22 hours of tiredness. My mother checked me twice, putting her hand on my heart to ensure I was still alive. I did not wake up the first time, but she failed to palpate my heartbeats in the second. I woke up and told her not to worry and that I was still alive. She hugged me, and I needed such a hug. I knew then she used to check me like that,” Mamdouh wrote on Facebook one month before his death in February. In January, the ministry of health and minister Doctor Khaled Abdel Ghaffar mourned Doctor Ehab Sobhy, a resident anaesthetist in Tala Central Hospital.

The Egyptian state-sponsored media used to reply to every problem raised by saying it was a global problem not specific to Egypt. Indeed, sudden deaths of doctors are a part of a worldwide problem known as burnout, defined as “a job-related stress syndrome resulting in emotional exhaustion, depersonalization, and reduced personal accomplishment.” In 2003, the European Forum of Medical Associations and the World Health Organization advised all national medical associations to pay attention to the problem of health care providers’ burnout. However, the burnout deaths in Egypt are remarkably higher than in most countries worldwide, the case of Covid-19 doctor deaths. During the pandemic, Egypt lost 600 doctors due to the infection, and the doctor deaths hit 5% of the recorded deaths due to the virus, which is higher than the world average.

Doctor deaths occur while Egypt suffers from an intensive lack of working doctors. Egypt has 82 thousand doctors in a 100-million population society, which means less than a doctor per 10,000. The Egyptian figure is less than not the developed countries, but even depleted countries such as Iran, which has 1.5 doctors per 10,000 population.

Why do doctors burn out?

Doctors in Egypt suffer from dozens of problems that make their lives so hard and tiring. Young doctors in Egypt work in public hospitals and primary care units for EGP 2000-5000 monthly. Such wages can hardly satisfy the basic needs of a 4-member family, which requires EGP 2500 to catch up with the national poverty line. Hence, doctors have to work long shifts (up to 48 hours continuously) in both public and private hospitals to get enough income for themselves, their families and their postgraduate studies. Doctors in Egypt must get a master’s degree to be promoted as specialists, lead a good life and pay for the mandatory postgraduate study. After January Revolution in 2011, the government started to issue decisions such as giving doctors leave during the doctoral exams. Law 14 of 2014 required the government to pay the tuition for the doctors’ necessary postgraduate studies and provide the doctor with a paid 1.5-year leave to finish his master’s research.

The government gradually overturned those gains. The exam leaves were reduced to only the day of the exam instead of the whole period of the exams. After the Covid-19 pandemic, the government used the pandemic to abolish all vacations, such as postgraduate research vacations and other obligatory vacations. Then, the doctors were forced to pay fees for the Egyptian Fellowship programs. Besides financial grievances and administrative abuse, the work environment in Egypt’s health facilities is so tiring for the doctors considering poor equipment, improper housing, and unnecessary administrative burden to get their salaries. Inadequate equipment and bad free services make the doctors a target for the people’s outrage, so recurrent assaults on healthcare providers are a widespread phenomenon in Egypt.

Legislative insufficiency also subjects doctors to be treated as criminals in case of medical errors, and even in some cases, doctors did their best to save the patient. The revealing point is that of 15 neonatologists who were prosecuted with medical negligence and sentenced to 2-year imprisonment after a mother of a highly preterm baby complained that her baby became blind after receiving care under this staff. Although medical expert reports pointed out that blindness could be an unavoidable complication of extreme prematurity and neonatal care, including oxygen therapy, the doctors condemned the doctors in such a mass trial.

What gives such a scene the description of “persecution” is the secret police treatment of the doctors’ problems. During the Covid-19 pandemic, the Egyptian police arrested seven doctors at least. They prosecuted them with terrorism charges because the doctors complained of the hospitals’ lack of protective equipment and the public hospitals’ bad conditions. While doctors were dying at an accelerating rate, PM Mustafa Madbouly accused the doctors that their absence from some hospitals led to increased deaths. EMS decided on a conference to reply to Madbouly’s provocative statements. Still, the police responded by closing the syndicate headquarters to prevent the conference and detaining two of the syndicate’s members. Finally, the Independence Current syndicate lobby to defend the doctors’ rights were forced out of the syndicate elections in 2021 under security intimidation. Such conditions alarm a severe public medical crisis in Egypt, which already suffers from poor health services and requires every doctor in the country to save the nation’s future.