On Sunday, the Egyptian Observatory for Press and Media said that the Supreme State Security Prosecution decided to imprison journalist Ahmed Fayez for 15 days pending investigations, against the background of his publication of a news piece stating that imprisoned political activist Alaa Abdel Fattah had been forced by the prison administration to end his hunger strike. Prosecutors charged Fayez with joining a terrorist group and spreading false news. On Thursday, Amnesty International condemned the Egyptian authorities’ reported force-feeding of Abdel Fattah, who is on hunger strike. Abdel Fattah has been on a hunger strike for six months. The Secretary-General of Amnesty International, Agnes Callamard, denounced not allowing Abdel Fattah’s family to visit him in prison, stressing his indigent health care. Callamard revealed her group’s intention to take escalatory steps if Abdel Fattah, an Egyptian-British, is not released, noting that they will organize more events until this is done. She also explained that Prime Minister Rishi Sunak told her that Abdel Fattah’s case would affect Egyptian-British relations and that not allowing his family to visit him and how they are dealt with is unacceptable.

Five CSOs participating in the COP27 climate summit appealed to the leaders participating in the summit to take a strong stand against the imprisonment of Abdel Fattah and other prisoners of conscience in Egypt. They stressed that there could be no climate justice without human rights, stressing that the Egyptian regime’s abuse of opposition voices violates the Paris Agreement, highlighting the critical importance of the role of civil society in combating climate change. 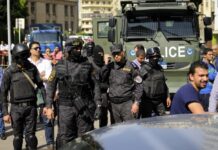