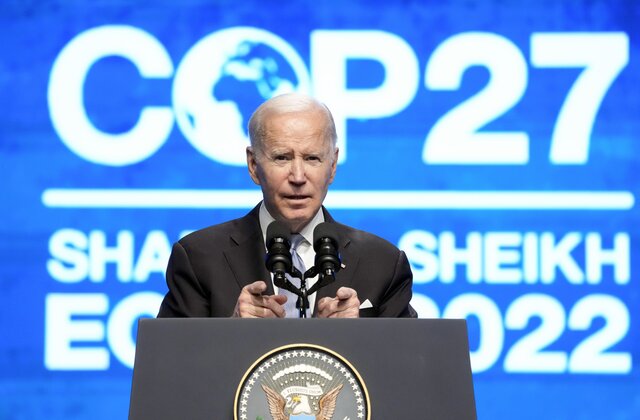 COP27 in Sharm El Sheikh received US president Joe Biden on Friday in the first US participation after overturning Trump’s withdrawal from the Paris Agreement of 2015. Biden pledged that his country would adhere to the outcomes of the previous COPs, doubling US world climate finance by about four folds to hit USD 11 billion, including USD 3 billion for climate adaptation in developing countries.

Biden met with Abdel Fattah al-Sisi for hours during his brief visit. Still, while the White House told human rights topped the discussion, reports highlighted that Biden thanked Sisi for Egypt’s role in the Gaza ceasefire with Israel last August and praised Egypt’s stance on the Russian war on Ukraine. On the other hand, Sisi replied to Biden explaining the state released the National Strategy of Human Rights in 2021, and he invited the opposition to a national dialogue. Sisi’s claims confronted a severe attack during COP27 on top of the mass arrests and the hunger strike declared by Egyptian activist and detainee Alaa Abdel Fattah for seven months and was escalated by the beginning of November because he overturned it yesterday without clear reasons.

Several Egyptian dissident activists criticized Sisi’s response to Biden, saying the document Sisi talked about does not address the real issues about human rights violations committed by Sisi’s regime, such as arbitrary arrests, forced disappearance, extended pretrial detention, revolving detainees on the exact charges, abusing terrorism charges and private properties confiscation and bad detention conditions aside from encroaching media and political freedoms. For them, the strategy lacked the executive steps that could make it valuable in reforming the human rights catastrophe in Egypt. Regarding the national dialogue, little, if any, can now suspend hope considering the regime’s security obsessions that led to 1500 arrests over the past few months and Sisi’s convulsive comments on political criticism of his public policies during the economic conference. In sum, Biden’s behaviour represented a regression from his previous pledges to address human rights in Egypt.

Egypt received blame but this time not from Biden but from a report issued by TNI, Stop Wapenhandel and Tripping Point North South, three international think tanks on universal justice and peace. The information slammed the massive US-topped world military spending, which is 30 folds over climate spending, with armies having 5% world hydrocarbon fingerprinting. According to the report, world spending on armament hit USD 9.45 trillion, 53.5% of world military spending, while total climate finance froze at USD 243.9 billion. Military spending of developed countries increased by 21% since 2013, while developing countries, which are the most affected by climate change, acquired 64% of world arms exports, including 13 countries engaged in armed conflicts, 20 under authoritarian regimes, 25 with the worst human rights indexes, and countries under armament ban such as Afghanistan, Central Africa, Myanmar, Somalia, Sudan, Yemen and Zimbabwe. The report addressed the Egyptian case considering Egypt is the COP27 host, as Egypt’s military spending hiked over the previous five years with a 5.7% share of world arms imports.

Despite Biden’s promises, the ongoing negotiations tumbled because the US and EU refused an independent damage and loss fund proposed by G-77, which was formed in COP26 to gather the most affected countries and involved 134 developing countries, including China. US and EU insisted on excluding China from the developing countries considering now it has become a developed country with a non-negligible share in greenhouse emissions. At the same time, China stresses the historical responsibility of the west since the industrial revolution and the low hydrocarbon emission per capita ratio in China. However, the US and Europe pledged USD 500 million in support of the clean energy transition in Egypt, keeping it on the top list of countries receiving US aid with constant annual assistance of USD 1.23 billion that goes mainly to the military.