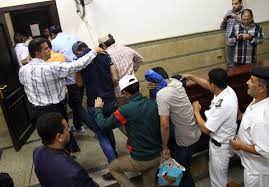 On Wednesday, the Committee for Justice said it documented 1,453 abuses against detainees in Egyptian detention facilities in its third quarterly report, covering the period from July to September.

The rights group said that the regime in Egypt is still sending contradictory messages about its intentions regarding the country’s human rights situation, noting that while dozens of prisoners are being released, arrest campaigns are still a common practice and a consistent pattern. It also said that Egypt is witnessing an economic crisis that the regime does not deal with transparently, which was evident in the authorities’ handling of the strike of the Beshai Steel Company workers and the crisis of the residents of Warraq Island.

The rights group stressed that despite the efforts of the Presidential Pardon Committee, the security and judicial authorities continued to abuse dissidents and human rights, defenders. It documented the final death sentences for five people, in addition to the inclusion of 42 convicts, including 19 students, on terrorist lists for five years.

The rights group’s report recommended defining the tasks of the Presidential Pardon Committee and expanding its scope of work to include all prisoners of conscience, in addition to opening serious investigations into crimes of torture and enforced disappearance. It also called for improving the conditions of prisoners in Egyptian detention facilities.