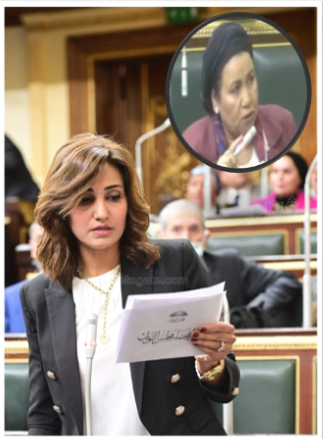 A few days ago, a beautiful unknown young lady stood under the dome of the Egyptian Parliament to take the constitutional oath as a representative of the people for the North, Central and South Upper Egypt constituencies. She is Raghda Abdel Salam Najati, and she did not get her new position through the election. Still, she inherited it from her mother, the late Representative Ibtisam Abu Rehab Muhammad, who died last October.

The scene of Representative Raghda Abdel Salam as she took the oath to succeed her late mother re-raised many criticisms of the laws and regulations regulating elections and parliamentary affairs, which were carefully designed to ensure that the security services have maximum control over the representatives and their decisions and to ensure that an unsatisfactory deputy does not cross the line.

The law stipulates, “If a seat becomes vacant for one of the elected members of the individual system, at least six months before the end of his term, a complementary election will be held, and if the place of one of the elected members in the list system became vacant, he would be replaced by one of the reserve candidates according to the order of the reserve names of the same capacity as the one who let his place vacant to complete the prescribed number.” After preparing the political arena with the necessary laws, the Egyptian security services, specifically the General Intelligence and National Security, took over organising the lists in the 2020 House of Representatives elections in the various constituencies. All those who sought to form lists from the independents and the opposition were excluded and abused. The “National Future” party, formed in 2014 to serve as a political base for the actual President, was chosen to become the first on the lists presented to the majority party.

Joining the Nation’s Future list of security agencies means obtaining a parliamentary seat without effort. Therefore, there was a fierce struggle to join that list, which was called the “National List”, and of course, political money was present, and whoever paid the most was allowed to join. This is not a guess but relatively information confirmed by those involved in that process. In September 2020, Ambassador Mohamed Morsi, the former assistant foreign minister, said that the cost of joining that list amounted to 6 million Egyptian pounds ($381,000), while Mortada Mansour, a former member of Parliament known to be close to the regime, confirmed that the cost of entering the “National List,” in some constituencies, amounted to 50 million Egyptian pounds ($3.17 million). In October 2020, the lawyer Tariq Jamil Saeed, known (he and his family) to be close to the regime, was arrested after criticising the method of selecting candidates on the “national list,” likening the elections to a “cartoon movie,” stressing that authorities nominate whoever pays more money.

Of course, whoever paid all this money wanted to ensure that it would not be in vain, mainly if an impediment prevented it from completing the parliamentary session. Therefore, many of them stipulated that their children be placed on the reserve list to inherit their seats if they become vacant, which happened in many cases, as we mentioned above. This method of elections ensured the absolute control of the Egyptian security services over the parliamentary majority, which created a parliament without real power that did not serve the country or the citizens. This was a significant reason for the deterioration of the economic and political conditions in the country.

Breaking up the Rabaa sit-in: Between false history and lost memory

Herd immunity: Has the Egyptian regime chosen a nightmare strategy?