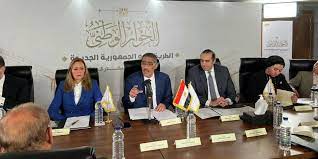 More than eight months have passed since the Egyptian President called for a “national dialogue” that includes the various sectors of society to discuss the country’s political and economic crises and propose ways to solve them, but this “dialogue” is still witnessing a faltering beginning. It has not started yet, while the opposition, National Democratic Movement, announced that it is considering freezing its participation in the dialogue.

After the call for national dialogue, optimism about a breakthrough in the Egyptian political scene has disappeared since Al-Sisi imposed an iron grip on power after assuming the presidency in 2014. Many warned that the regime does not intend to change its policies and that the call for dialogue is a tactical change in its dealings with the opposition, as the goal was to reduce criticism towards human rights violations with the United Nations Climate Summit (COP27). This warning was appropriate. Since the end of the Climate Summit, which Egypt hosted last November, the rhythm of political opponents’ release has decreased sharply, and movements in any human rights file have slowed while the government continues to take unilateral, controversial measures in the economic and social aspects without waiting for the outcomes of the national dialogue.

A member of the Board of Trustees of the National Dialogue, Abdul-Azim Hammad, confirmed that the reason for delaying the procedures for starting the national dialogue and setting a date for the start of its sessions is because the parties of the democratic civil movement and those affiliated with the opposition, are waiting for the authority’s position on the controversial Suez Canal Fund Law, which it considers it as a sale of the Suez Canal, which “represents a threat to Egypt’s sovereignty over its strategic resources and would also threaten Egypt’s national security.” And according to Hammad, the civil movement is looking for the solutions proposed by the government to solve the current economic crisis, especially since there is an economic axis for the dialogue. The authority’s insistence on passing the Canal Fund Law despite objections indicates its response to the solutions that the National Dialogue will propose for the economic problems or whether it will continue with its controversial policies.

In addition to the opposition parties’ fear of participating in the dialogue because of this law, Hammad said that opposition members are saying that the participation is a vain effort, arguing that the state reduced political prisoners’ release and those held on remand due to opinion issues, stressing that the biggest breakthrough that can happen now is releasing a significant number of prisoners to improve the political atmosphere and pave the way for dialogue, even if it is only on political issues at present.

Medhat Al-Zahed, head of the Socialist Popular Alliance Party and a member of the Civil Democratic Movement, revealed that there are discussions in the party and civil movement parties, in general, to stop participating in the dialogue due to the state taking hazardous economic decisions, especially the dismantling of the productive assets of the economy and the country’s vital facilities, their revenues, and exchanging it with debts, which is worsening the economic crisis and does not provide a solution to it. Al-Zahed explained that the ruling institutions that called for dialogue were supposed to listen to the opposition’s opinion. Still, they called for an economic conference that unilaterally determined its agenda, objectives, and participants while the procedures for preparing for the dialogue continued. After many months, they still need to start a conversation on economic issues, while political reform is still waiting.

The political expert, Abdel Fattah Daoud, confirmed in an interview with Egypt Watch that the government took what it wanted from the call for the national dialogue and is no longer interested in holding it like before. “The regime got good publicity for the UN climate summit (COP27). Many Western leaders applauded his moves to hold a national dialogue, which the regime wanted.” Daoud argued that the Egyptian security services did not specify the list of names chosen to attend the sessions of the dialogue and committees as representatives of the loyalist parties and did not present it against the list of candidates from the parties of the civil movement and civil society. Thus, the regime doesn’t want a dialogue. Daoud expressed his belief that this dialogue would take many months and perhaps a year so that the regime would continue to use it as propaganda in the West. In the end, the implementation of its outputs and proposals would be delayed for as long as possible. “The regime is waiting for any improvement in the economic situation in any way, and then it will not need this dialogue.”