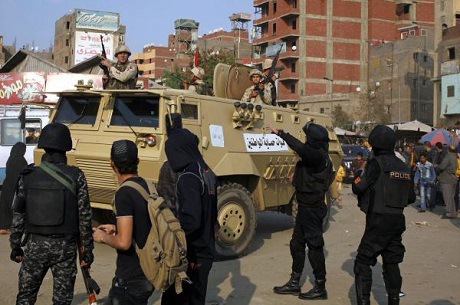 Amidst the storm of corruption scandals that have hit a number of Egypt’s main agencies, Egypt Watch reveals a corruption case within Egypt’s National Security Agency, an internal intelligence service.

The case of corruption is related to how one of the National Security Agency leaders exploitered his position to profit in violation of the law.

An official source revealed that Colonel Amr Farouk al-Hemili, a former official in the governorate of Beni Suef (centre), was involved in financial excesses of millions of pounds.

These abuses included the imposition of royalties on businessmen and gold traders, the province, and forcing them to participate against their will in projects in return for large profits.

The sources say that a number of officers in the National Security Agency have carried out similar abuses to Farouk, but that Farouk’s violations were expansive.

There have been many attempts to cover up Farouk’s activities, especially by his brother, Ahmad Farooq al-Hemili, an important judge, but all those attempts have failed.

The investigations confirmed the involvement of al-Hemili and that the Interior Ministry tried to pre-empt this by overthrowing him in the police movement last July.

The sources pointed out that al-Hemaili participated in the business of illegal trade, in exchange for facilitating the seizure of state-owned land.

According to the source, the intelligence apparatus is silent on other incidents of corruption against senior officers in other provinces, who exploited their influence to get money from detainees in exchange for not fabricating cases for them.

Egypt’s National Security officers have broad powers, and there is no limit to their influence. They can detain suspects outside the law, torture them, and sometimes kill them.

They can also fabricate cases that leave activists or citizens in prison for long periods, which tempts them to offer bribes.

The last shake up in the ministry, which was approved by the Interior Minister Major General Mahmoud Tawfiq, overthrew the head of the National Security Agency Major General Imad Siam from office, and appointed him assistant minister of the security sector.

Siam has been in the ministry’s most important sector for less than a year, and it is not known why he was replaced by Major General Adel Jaafar, the new head of the counterterror agency.

The leak of reports detailing corruption carried out by officers of the National Security Agency comes at a time when al-Sisi himself faces accusations of corruption.

According to businessman Mohamed Ali, al-Sisi and his wife wasted billions of pounds building hotels and presidential palaces, while the Egyptian people live in poverty.

Although al-Sisi acknowledges that the education and health system are poor in Egypt, he has poured billions of pounds into building palaces.

CPJ: Egypt is one of the world’s worst jailers of journalists