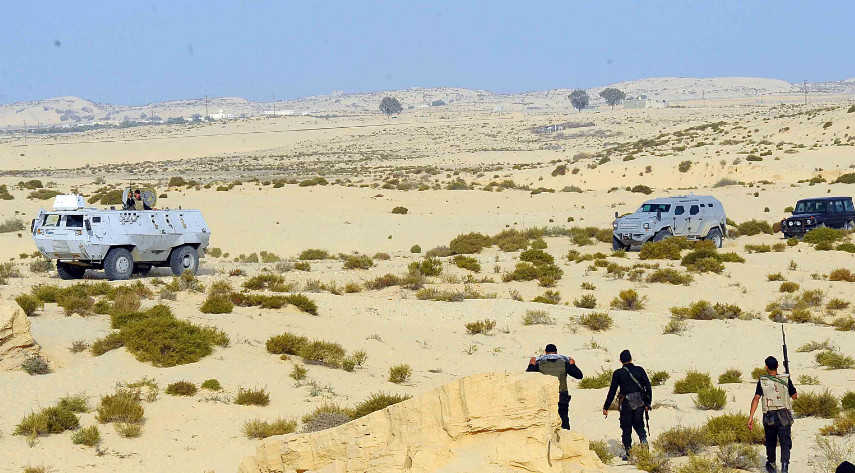 The last months have witnessed increasing attacks launched by Sinai Province in the area of Bir al-Abd, to the extent that observers now consider it the strategic stronghold of the organisation instead of Arish, Sheikh Zuweid, or Rafah. Tribal sources in North Sinai confirmed that Sinai Province, the local branch of ISIS in Egypt, started operating in Bir al-Abd in the middle of North Sinai in 2019. Bir al-Abd area has witnessed several armed attacks and kidnapping operations against civilians and military personnel over the past several months. Sinai Province has released videos of themselves slaughtering civilians who cooperated with the security forces and informed them about the terror group’s movements. Tribal sources indicated that the past few days have witnessed a serious escalation by armed elements loyal to the organisation, including the assassination of the Bir al-Abd Police Chief, Colonel Wael Bahgat. The organisation has adopted a strategy on the borders of Bir al-Abd, attacking security checkpoints surrounding the city, without appearing inside the city centre. This strategy was intended to limit provocations against the regime so that the army didn’t launch a major military operation against the organisation, similar to what happened in the cities of Rafah, Sheikh Zuweid and Arish. The organisation surprised everyone when it attacked the police chief, despite the tight security measures which have recently been implemented in Sinai, and in the city of Bir al-Abed in particular.

Tribal sources told Egypt Watch that this attack was in retaliation to a massive military operation launched by the army and police against armed terrorist groups in large areas on the outskirts of the city. The organisation has said that the attacks will help Sinai Province retain its image and reputation as powerful and influential. This assassination attempt raises widespread doubts about the presence of collaborators from the security services with Sinai Province, and that information about the policeman’s whereabouts was leaked. The bullets hit his driver, but at the time he was actually inside a nearby pharmacy, not in his car, where he stayed for more than 15 minutes until police forces came. Medical sources later announced that his driver, Ahmed Abdel Salam, was killed after being hit by multiple bullets.

The people of Bir al-Abed are afraid to cooperate with the army to confront the organisation, for fear of being targeted, similar to what happened to civilians who were slaughtered in the cities of Rafah and Sheikh Zuweid. They are also afraid to help Sinai Province in case they are targeted by the army. But, in practice, civilians may have a relative in the army or in the armed groups, or revenge may be taken against them if they refuse to help any party. Sinai Province revealed its strong presence for the first time in Bir al-Abd last September, when it carried out an attack on a checkpoint south of Bir al-Abd, killing 15 soldiers. The organisation moved from the cities of Arish, Rafah and Sheikh Zuweid to Bir al-Abd after fierce military operations launched by the army.

The area of Bir al-Abd contains desert paths that provide a quick escape for ISIS operatives from the security forces to the central Sinai region, which is full of mountains and bunkers. But a strategic expert pointed to another reason behind the organisation’s move to Bir al-Abd, which is that in the event that the international coastal road is cut off and they take control of the area’s checkpoints, in practice, forces in Arish, Rafah and Sheikh Zuweid are cut off from supplies. All of this prompted the army to send military reinforcements to the south and east of Bir al-Abd, and to launch military campaigns, with air and artillery cover. However, the latest assassination attempt in the centre of Bir al-Abd indicates that the violent strikes launched by the Egyptian regime forces did not achieve their goals, and actually led to the opposite result. Sinai Province’s militants appeared in the city centre for the first time in the history of armed confrontations between armed groups and the Egyptian regime.

Has al-Sisi launched a programme to assassinate opponents abroad?