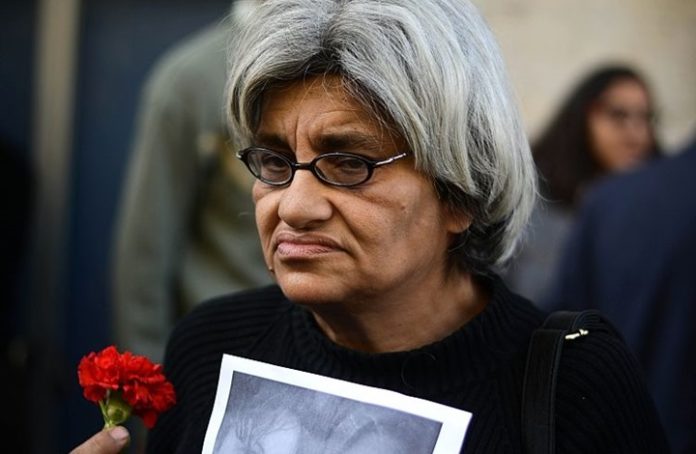 The security forces abducted the activist Sanaa Seif in front of the Egyptian public prosecutor’s office. She was then transferred to the Supreme State Security Prosecution, where she was sentenced to 15 days imprisonment pending investigation. These events took place a day after she, her sister, Mona, and her mother, Laila Soueif, were attacked in front of Tora Prison, where her brother Alaa Abdelfattah is being held. All this prosecution is not a mere coincidence, but a part of al Sisi’s personal punishment for this family.

About ten years ago, specifically on February 3 2011, after the outbreak of the January Revolution, a Military Intelligence force stormed Hesham Mubarak Law Centre. The force arrested everyone there, including the lawyers, the jurists, and the political activists headed by Lawyer Ahmed Seif el-Islam Abdelfattah, the centre’s manager. Hours later, the first meeting between Seif and the head of the Military Intelligence at the time, Abdel Fattah al-Sisi, took place.

Al-Sisi gave the detainees a speech about how Hosni Mubarak must be the president, and how the squares must be evacuated of all demonstrators to preserve Egypt’s security. Suddenly, he turned to the oldest one among them, Ahmed Seif, and asked him why he doesn’t advise these young people as he is their elder and is supposed to be a rational and reasonable person. Seif laughed sarcastically and replied, “You could have deceived them with such talk before the 25th of January. However, they are free now, and nothing would ever dissuade them from freedom.”

After hearing Seif’s answer, al-Sisi got angry, his tone and speech changed, and he threatened all the detainees with an extended prison sentence, saying, “You will never see the sun again.” The next day, however, the squares were filled with demonstrators as that was the first Friday after the Friday of Anger when the revolutionaries gathered together. So, al-Sisi had to release the detainees, an action that was made fun of because there was never before a head of intelligence whose word was overthrown after only a few hours. Therefore, al-Sisi’s personal animosity towards Seif and his family continued.

Months after that incident, precisely in October 2011, when Egypt was under the rule of the Supreme Council of the Armed Forces whose youngest member was al-Sisi, a military police force arrested Alaa and accused him of dozens of charges, among which were the incitement of and the participation in assaulting members of the Armed Forces, the destruction of military equipment, demonstration and assembly, and breaching the public peace. All of this was because of the supportive position he took of the protest staged by a group of Coptic activists in front of the Maspero TV building, where the army tanks crushed them. Alaa was imprisoned for months until he was released in December 2011 after a great deal of pressure was applied.

In November 2013, while al-Sisi was ruling Egypt under the guise of being its Minister of Defence before he assumed the presidency several months later, Alaa was arrested again on charges of inciting others to demonstrate against the constitution. Twenty police investigators broke into his house, assaulted him and his wife, and took away their personal belongings like computers and cell phones. Later on, they broadcast some private videos of his wife that were on her phone.

In June 2014, while Alaa was in pretrial detention, the security forces arrested his sister Sanaa in front of Ittihadia Palace because she participated in a march protesting the law prohibiting demonstrations, and she was sentenced to three years in prison. While the two siblings were in jail, their father Ahmed Seif died of the severity of oppression and injustice, months before Alaa was sentenced to five years imprisonment. He got out of prison in 2020 for a few days only to be arrested once more and admitted to Tora Prison.

Over the past weeks, photos of Dr. Laila Soueif, a Mathematics Professor at Cairo University, spending the night sleeping in front of Tora Prison, took social media by storm. She was there hoping to get reassurance on the well-being of her son, who was denied visits from his family, and Dr. Leila stopped hearing any news from him. She was, later on, joined by her daughters Sanaa and Mona, and they demanded to receive a letter from Alaa, but the Investigations Services Officer Mohamed el-Nashar hired a group of female thugs to beat them up in front of security forces and Tora Prison’s guards.

Laila, Mona, and Sanaa went to the public prosecutor’s office with Lawyer Khaled Ali to file a complaint against the Interior Ministry and the prison service. The attorney general Hamada el-Sawy, his assistants, and his entire office’s staff refused to accept the complaint and left them there until a police force came to assault them and abduct Sanaa, who was imprisoned again by orders from the Supreme State Security Prosecution.

In a testimony exclusive to Egypt Watch, one of the people close to the president said: “The file of Seif’s family is a special one inside the Ministry of Interior, and al-Sisi gives it his personal attention. Over the past years, the name of Alaa Abdelfattah was mentioned a lot during al-Sisi’s meetings. One of those was al-Sisi’s meeting with the intellectuals in 2016, where one of the leading publishers asked him to pardon Alaa. Al-Sisi, however, replied sharply: “He is insulting my mother, and he and his family need to be taught a lesson,” a statement that was repeated during his meeting with the media.

Road accidents in Egypt: The blood does not dry up