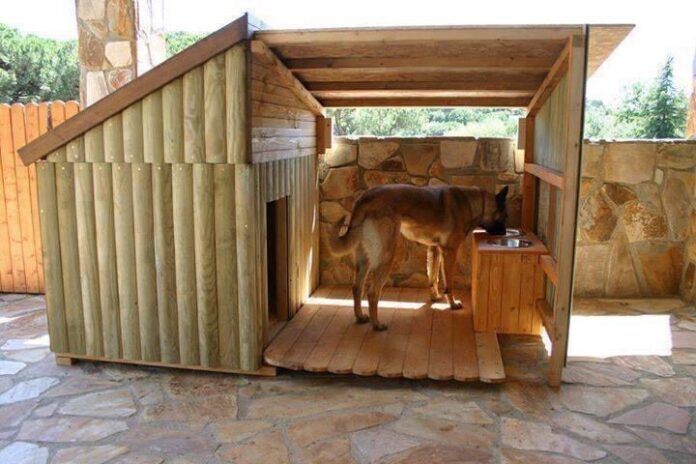 A storm of anger swept through social media in Egypt after leaked videos were circulated from inside one of General Abdel Fattah al-Sisi’s palaces that are being constructed showing the construction of large dog houses.

The leaked clips came from one of the palaces being built in the coastal New Alamein region, in the north of the country, which sparked widespread anger, as a hashtag entitled al-Sisi’s dog house took the lead on Twitter in Egypt.

The leaked photos and videos showed the building of dog houses on a large area attached to the palace, inside which there are bathrooms dedicated to them in addition to swimming pools. Dog houses contain rooms for doctors dedicated to taking care of dogs. Activists and tweeters expressed their dissatisfaction and anger at these scenes.

Followers mocked al-Sisi’s keenness to build homes with these spaces to raise dogs inside his palaces, at a time when the suffering of the poor in Egypt continues, and many of them are threatened with having their homes demolished because of the building law’s violations. Activists compared the scenes of dog houses in the presidential palace and the streets’ flooding in some governorates during the past days due to rain and worn out sewage networks and infrastructure. The rain, especially in the Alexandria governorate, led to the sinking of many homes and the collapse of others, and some deaths occurred as a result of electrocution in the streets from exposed wires.

Several activists posted pictures of poor people’s homes in Egypt, where there is no roof and the family live in one narrow room. Participants pointed out the extravagance and the amount al-Sisi spends on his palaces and dog houses, while millions of homeless people live in Egypt without shelter and sleep on pavements and in cemeteries and under bridges.

Others compared the overcrowded prison situation with thousands of detainees and their suffering and the suffering of their families and the luxury of al-Sisi’s dogs in his palaces. It is noteworthy that in July 2015, local Egyptian newspapers revealed that the goods village at Cairo Airport received 1,400 Belgian dogs to participate at the time in securing the opening ceremony of the new Suez Canal branch. She indicated that these dogs are trained in counterterrorism work and the detection of explosives to secure Abdel Fattah al-Sisi during the ceremony.

At the time, EgyptAir said that one of the aircraft coming from Belgium carried 1,400 Malino dogs and were received by high sovereign authorities. Many veterinary experts participated in receiving the shipment. Security authorities explained that the Belgian dog, or what is known as the Malino, is distinguished by its superior intelligence, ferocity, and strength and is characteristic of courage and that it can jump up to two metres. It added that dogs were distributed at many border crossings at that time, and important and vital facilities were secured, in addition to securing the celebration venue.

The widespread anger over the extravagance in which al-Sisi lives and the allocation of large houses within his palaces to dogs comes after similar anger over the budget for the palaces the president is building in el-Alamein, the Administrative Capital, and other places. This comes at a time when al-Sisi asks citizens for patience, endurance, and to go hungry so that he can build the country; the citizens, most of whom live below the poverty line, were surprised by the reports about al-Sisi’s presidential shortcomings.

Al-Sisi admitted in a youth conference in 2019 that he was building these palaces, claiming that they are for Egypt, which triggered massive demonstrations in many provinces calling for his departure. The contractor and artist Mohamed Ali revealed that he was commissioned to build the structure of a palace for al-Sisi in the city of el-Alamein. He explained that this only cost about EGP 200 million before he withdrew from the project. He revealed other scandals, such as al-Sisi gifting a hotel worth EGP 2 billion to one of his friends while the country is sinking into debt.