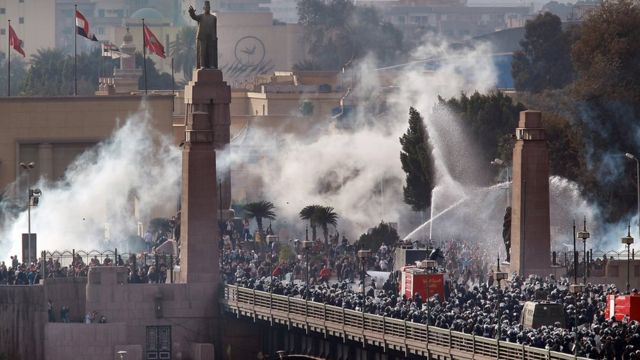 On the 10th anniversary of the popular revolution, Egyptians are living at an unprecedented level of repression since Abdel Fattah al-Sisi came to power through a military coup against the late Mohamed Morsi. After 10 years of the 25 January 2011 revolution and more than seven years of the coup, Egyptians are still silenced by fear, to the level that they did not experience during the late Presidents Gamal Abdel Nasser and Hosni Mubarak’s reigns.

Muhammad, who refused to reveal his identity or second name for fear of persecution, narrates the details of the 10 years of the revolution. He says: “I remember well the day of the fall of Mubarak’s rule. Millions of Egyptians participated in the revolution to demand the overthrow of the regime.” He adds: “The events of January and February 2011 will remain engraved in my memory and the memory of all those who lived those days of hope.” He continues, “This was the first time that my generation witnessed movements calling for freedom, and with the announcement of Mubarak’s fall, I called my father and gave him the news that we had broken the barrier of fear.”

Muhammad’s father died a few months later, and thus did not live to witness the arrival of the Muslim Brotherhood to power in 2012, and the army’s return to power within a short period, after the military coup led by Sisi. During the first two years of the transitional period, the protests continued. Muhammad participated and then one day he was hit in the arm and legs with shotgun pellets. He says that the police closed all roads leading to Tahrir Square, and the same applies to all areas of central Cairo, where cafes are closed regularly, and riot police cordoned off the streets.

Last September, fearing that calls for protests would bear fruit, the government deployed more police officers, and the Organisation for Freedom of Thought and Expression recorded 1,920 arrests. He adds: “In fact, Egypt did not experience this kind of repression even during the periods of Nasser or Mubarak’s rule.” He gives an example by saying: “A small (social media) post can be enough to arrest an Egyptian citizen. All Egyptians fear Sisi today, and this is evidence of the weakness of the authority, not the other way around.” He says that the Sisi regime was originally founded on a massacre, which Human Rights Watch described as “the largest massacre in Egypt’s modern history.”

Consequently, “it was clear that any protest would be suppressed,” according to Muhammad, who strongly criticised the designation of the Muslim Brotherhood as a “terrorist” organisation, even though he did not belong to it at any time and criticised it during Morsi’s rule. He points out that the numerous trials against its leadership and members were nothing but “farces,” and life imprisonment has become a common punishment.

Muhammad, who was speaking in a low voice for fear of being tracked down or reported, says: “We got the situation that when we discuss the revolution recognised in the constitution, it is with coded words.” He points out that he and others who reject repression policies have turned to coded applications such as Signal when they talk together about the country’s conditions or express their opinions. He justified this by saying, “I do not want to end up in Scorpion Prison,” which is a notorious prison (south of Cairo), which international human rights organisations have described as “the cemetery of political opponents.” He adds: “You can enter this prison because of a word, but it is not known when you will be released. Some people leave it in coffins.”

Muhammad recalls his friend Mustafa (also a pseudonym), who spent 10 days there in 2019. He remembers that Mustafa was at a metro station when the police searched him and checked his phone, to discover old leaflets criticising the regime, so they transferred him to the police station, where he spent three days before he was transferred with 60 other people to Tora Prison. Once there, he joined 85 people crammed into a cell, which was lit for an entire day. Mustafa recalls his imprisonment, saying, “They took everything from us; our money and our valuables, we had nothing to eat, and people started screaming.” Contrary to all expectations, Mustafa and a large number of his companions were released after two weeks, hoping that he would be able to leave his country. Still, he could not, as a decision to prevent him from travelling was issued at the time of his release, so he remained imprisoned in a large prison inside Egypt.

According to human rights estimates, there are at least 60,000 political prisoners in Egypt. “Certainly, the real number far exceeds these statistics,” said Mohamed Lotfi, director of the Egyptian Commission for Rights and Freedoms, one of the last human rights NGOs in Egypt. The era of fear continues in this country, as Sisi received from Emmanuel Macron the Grand Cross for the National Legion of Honour last December, during his visit to Paris.

But Lotfi did not remain silent despite his wife’s imprisonment in 2019 and admits that this was “a method used by the regime to silence him.” He states that he was also afraid. For years, he documented cases of enforced disappearance and political imprisonment under the pretext of fighting terrorism and in the name of the 2015 law that criminalises any criticism of the authority. He adds, “We have witnessed a very rapid increase in accusations such as belonging to a terrorist group or publishing information affecting the security of the state, especially after the passage of this law, and as for the government, every voice that rises to criticise it is considered terrorism.”

Lofti says that the regime is also afraid, as it “feels insecure, because the experience of 2011 is rooted in memory, and accordingly, he believes that it has the legitimacy to suppress any voice that could lead in the medium or long term to a change towards democracy.” Two weeks after the anniversary of this stolen revolution, authorities are now deploying its security forces to protect the “good citizen” and al-Sisi’s regime.