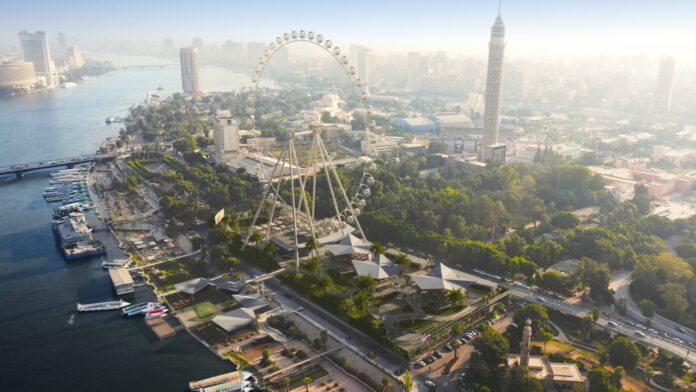 Egypt has been undergoing controversy and resentment in recent days due to a number of new projects which the Egyptian government intends to launch.

One of these projects is the Cairo Eye, which would be the first recreational and tourist roller coaster in Cairo, and the largest in Africa, emulating the London Eye, one of Britain’s most important landmarks.

The project is planned to take place in Masala Park in Zamalek district across 20,000 square metres, with a capacity of 2.5 million visitors per year. The roller coaster is set at 120 metres and would allow visitors to view 50 kilometres from Cairo, and to see all landmarks around it, with investments of EGP 500 million. The project was announced and launched at a press conference on 21 January, in the presence of the Minister of Tourism and Antiquities Dr. Khaled al-Anany, the Governor of Cairo, General Khaled Abdullah, and the Presidential Advisor for Urban Planning, General Amir Sayed Ahmed.

Only a few hours passed since the conference before the people of Zamalek declared their rejection of the project, objected to its implementation in their region, launched an electronic campaign aimed at collecting signatures against it, demanded its transfer and transmitted the signatures as an official complaint to the relevant state authorities.  Objections put forward by the residents included several reasons, most notably that the project would increase traffic congestion in an area that is already busy and small, increase the noise that residents can no longer tolerate, in addition to the negative effect it would have on the historic park and its trees.

A number of the public figures showed solidarity with the people’s refusal, the Former Minister of Industry Munir Fakhry Abdel Nour said: “The Cairo Eye project, to be built in Zamalek, is catastrophic, where is the traffic, environmental and organisational studies on which it was based?” In response to one of his follower’s questions about the Cairo Eye project, businessman Najuib Sawiris wrote in a Twitter post: “Good project in the wrong place and it’s completely stopping traffic at the entrance to Zamalek! It will be very good in the New Administrative Capital.”

Parliament also reacted to the general rejection of the project. Dr. Ashraf Hatem, chairman of the committee on Health Affairs, submitted a briefing request on the refusal to establish the project, claiming that Zamalek island is a nature reserve, and that the Masala Park is a heritage park and a state facility and that it is only by the rules, procedures and laws governing it that they should be dealt with. MP Dalia el-Sadany, member of the Media, Culture and Antiquities parliamentarian committee, submitted a briefing request to the Prime Minister and the Ministers of Local Development and Culture on the project, demanding that it be transferred to the area of the Great Egyptian Museum so that more tourists benefit it. She said that in Zamalek it wouldn’t be able to accommodate 2 million tourists, the target for the project, because of its historical and archaeological nature. Dalia confirmed that the selection of the archaeological park listed in accordance with Decision No. 817 of 2020, as an archaeological park in Zamalek, is wrong and that it will destroy the area and affect its architectural, artistic and historical heritage.

Another new project which faced widespread criticism is the Ismailia Bridge project in Masr al-Jadidah (Heliopolis), which is set to pass near many ancient buildings, including the Basilike archaeological church, a church established by Baron Amban at the beginning of the last century. The project aims to establish a two-kilometre-long bridge from Ismailia Square, passing through Othman Ben Affan Street, then Basilike Square, along the Church of Basilike of Mary, and along al-Ahram Street, which is the first and important hub of the heritage neighbourhood, right up to the Presidential Palace and the Heliopolis Sports Club.  The project caused resentment among citizens of Masr al-Jadidah, who considered that the construction of the bridge would destroy this distinctive heritage area, which is the heart of the neighbourhood, as well as the negative impact on the quality of life in this ancient neighbourhood, and the catastrophic environmental and security impact.

Residents of the neighbourhood formed the Masr al-Jadidah Heritage Initiative, which issued a statement saying: “Masr Al-Jadidah has a culture and historical specificity that cannot be condoned for development or proposals for solutions, accordingly, we express the deep rejection and annoyance of the vast majority of the residents of Masr al-Jadidah, regarding the planned bridge, at the heart of the historic and heritage area of the neighbourhood.” Public figures and officials interacted with the rejection and displeasure of the people of the neighbourhood, most recently today. The member of the General Committee of the Egyptian Parliament, Freddy Elbaiady, submitted a briefing request on the project, addressed to the prime minister and the ministers of state of antiquities and transportation.

The Egyptian parliamentarian noted that the project would destroy the largest and most important square in Masr al-Jadidah, which is the largest and oldest historical hub (Basilike Square), in addition to the negative impact on existing services in the region such as schools and hospitals. Elbaiady called for the immediate cessation of the start-up procedures for the project, which in his opinion, distorts civilisation and ignores the archaeological value of historical monuments, which are ancient tourist and religious monuments in Cairo.

Tarek Shokry, Member of the Egyptian Parliament and Undersecretary for the Housing Committee, issued a statement declaring full solidarity with the demands of the people of Masr al-Jadidah, stressing the lack of conviction in the bridge project. He also called for the importance of preservation of this unique heritage and historical area, which was more important than improving traffic, which, in his opinion, is now very acceptable in the region.

The President of the Egyptian Architects’ Association, Saifullah Samy Abulnaga, said that the construction of the bridge in the area was contrary to the Uniform Building Law, as it has heritage value, noting that the law prohibited construction of any buildings in public and open spaces or street and squares in designated areas, and resulted of the visual image of the façades of buildings, such as pedestrian bridges and car bridges, or advertising and signboards that cross the streets and squares.

A member of parliament for Masr al-Jadidah and Nasr City, Amr Elsonbaty, also revealed that he had submitted a formal request to the governorate officials to inquire about the construction plan for the Basilike Church Bridge, which threatened the entire area, and he confirmed that the passage of the bridge in an archaeological area next to the Basilike Church would cause major urban damage to the area.

For his part, the former Secretary-General of the Arab League States, Amr Moussa, issued a statement on Facebook in solidarity with the demands of the people of Zamalek and Masr al-Jadidah: “I add my voice to the voices of the citizens who protested against the roller coaster Project, to be established in an area crowded with clubs, hotels, schools, numerous activities, car traffic and people, and in the land of a historic heritage park that must be preserved and untouched, or any green land in all of Cairo.” He added: “I also pay tribute to the efforts of the citizens of Masr al-Jadidah regarding the bridge project to be established in the historical and heritage area of Kurbah, as well as their follow-up and expression of their opinions on the construction of the Baron Amban Palace, the founder of the suburb.”

It is noteworthy that the resentment of the people of Masr al-Jadidah follows a series of projects aimed at linking Cairo to the New Administrative Capital, which the army is overseeing, including the construction of at least six bridges linking Masr Al-Jadidah with the Suez Road, which leads to the Administrative Capital. This series of projects included, in just four months, the removal of 390,000 square metres of green space, and the uprooting of palms and trees from major streets in the neighbourhood, in order to expand car routes at a cost of up to $48 million, according to Cairo’s official Facebook page.