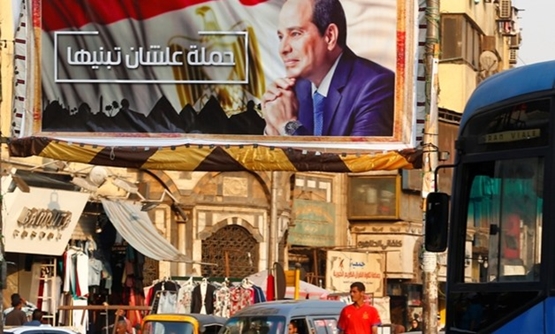 In April, during the constitutional amendments referendum, members of the Nation’s Future Party distributed food packages and gave money to citizens voting in the referendum. This was reminiscent of the practices of the now dissolved National Democratic Party (NDP), the political front of the former President Mohamed Hosni Mubarak, who was ousted in the January 25 Revolution.

Actually, since the establishment of the Nation’s Future Party in 2014 and its participation in the parliamentary elections in 2015, the party is considered the regime’s party or the new NDP, but it has not succeeded as a powerful political alternative to Sisi’s authority.

The Nation’s Future has been associated with the regime of the president since it was established as an extension to the Nation’s Future campaign, which was established by the Military Intelligence to be the youth arm of Sisi’s candidacy campaign during the 2014 presidential election. The Egyptian regime has always feared the young people who overthrew Mubarak so after Sisi’s victory, the general exploited the campaign and transformed it into a political party.

Sisi nominated 22-year-old Mohamed Badran as the party leader. Badran worked in the political office of Sisi’s campaign and as the coordinator of Nation’s Future campaign. Some businessmen trying to get closer to the ruling authority provided the required funds for the party, among them Ahmed Abou Hashima and Mansour Amer.

Badran and others participated in the “cooking” of the parliamentary elections under the supervision of Egyptian security bodies and the presidency. The Nation’s Future succeeded as it is backed by security bodies and businessmen, gaining 53 parliamentary seats to become the second largest bloc. The election success of the party was due to the local influence of its candidates.

After the parliamentary elections, Badran suddenly disappeared and traveled to USA to complete his studies and then resigned from the the party leadership in September 2016. Behind the curtain, there was talk of internal conflicts and that Sisi disproved after Badran was found to be involved in corruption. Ashraf Rashad, chief of the parliamentary bloc Nation’s Future, replaced Badran.

Despite the ruling authority’s overwhelming support, the party has  still not succeeded in becoming the new NDP, in other words it couldn’t become the political organisation for the authorities. There is no better proof for that than the attempts of the authorities to establish a new political party last year to backup the president and to fill “the political gap around the president who still relies on its his popularity.”

There are many reasons why Nation’s Future failed to be the “president’s party.” On top of the list is that the general despises politics and considers it degrading as he is a military man. As he said in one of his speeches: “I’m not a politician who just talks.”

The fact that he despises politics drove him to refuse to join the Nation’s Future which prevented it from being the official party.  As a direct result of this refusal, the leaders of the dissolved NDP, major political families and businessmen have dispersed in favour of other parties such as the Free Egyptians Party and Al-Wafd, or preferred to be independent.

Another problem is that the majority of parties on the political scene only compete for the attention of the governing authority. There is no real opposition, all these parties have been suppressed and its leaders arrested.

The establishment of a ruling party relies on maintaining a political balance between stockholders, businessmen, major families and their participation in decision making.

Since the current authority doesn’t accept such requirements, then the process of creating a ruling party seems pointless.

In Egypt the suffering of political detainees does not stop after...

The new NGO law: Has Cairo responded to foreign pressure?