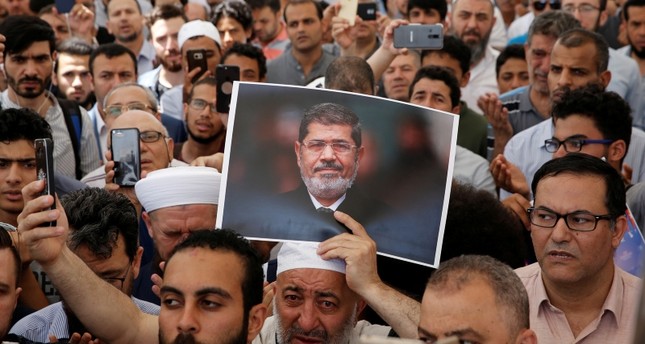 Abdel Moneim Abdel Maqsoud, the lawyer of former Egyptian President Mohamed Morsi, has revealed on CNN details of the last minutes of Morsi’s life after he fell unconscious during his trial session.

“He spoke for seven minutes before the hearing was adjourned, and a minute later we saw a noise inside the court’s glass cage. We could hear the defendants screaming: Dr. Morsi is dead,” said Maqsoud.

“He will never talk about anything that harms the security of the country,” he said. “He was not allowed to see his lawyer or communicate with the outside world, or his family, and was held in solitary confinement.”

“A minute after the trial session, there was a big fuss inside the court cage, and some doctors wanted to go to Dr. Morsi [and examine him],” his lawyer added.

He pointed out that the glass cage inside the courtroom was soundproof: “But we were able to hear [his] voice because the cries of the defendants were very [loud].”

The Public Prosecution has issued a statement on the death of former President Mohamed Morsi: “The Public Prosecutor’s Office received on Monday afternoon a notice of the death of Mohamed Morsi Al-Ayyat while attending the trial session in case No. 56458… during the trial, [the] deceased [asked] to talk and [we] allowed him to do so in court where he spoke for five minutes. After the end of his speech the court raised the hearing for deliberation.”

Attorney-General Nabil Ahmed Sadiq impounded the medical file on Morsi’s treatment and delegated a higher committee of forensic doctors headed by the chief forensic doctor and the director of the forensic department to prepare a forensic report on the causes of death in compliance with the burial permit.