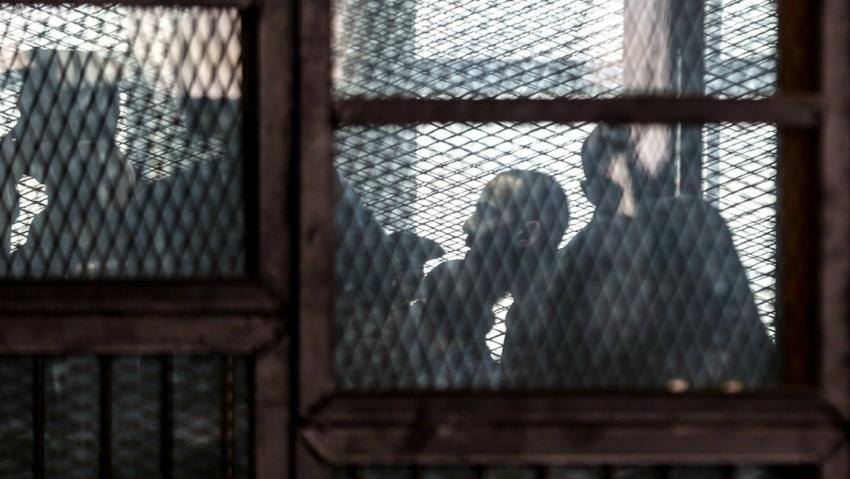 When former Egyptian President Mohamed Morsi died after collapsing in a defendant’s cage in a Cairo court this June, the world’s attention turned to the dire prison conditions in Egypt.

Morsi had been denied necessary medical attention, possibly meeting the threshold for torture in Egyptian and international law, according to a report published by an independent review panel in March 2018.

Morsi’s son, Abdullah, has accused Egyptian President Abdel Fattah el-Sisi and other officials of “killing” his father, while Aboul Fotouh’s son, Ahmed, wrote on Facebook that his father may succumb to the “deliberate” abuse in Cairo’s Torah prison “at any time”.

Shortly before Aboul Fotouh suffered the heart attacks, the Egyptian Center for Economic and Social Rights and the Adalah Center for Rights and Freedoms submitted a petition to the Egyptian public prosecutor concerning his “deteriorating health condition” and demanded urgent intervention, but he was denied adequate medical treatment.

The UK-based Arab Organisation for Human Rights reports that over 700 Egyptian prisoners have died of medical negligence since 2011.

Alejandra Vicente, legal director of REDRESS, an organisation that seeks justice and reparation for survivors of torture, told Al Jazeera that denial of medical care in prisons can amount to torture if it meets the requirements of the UN Convention against Torture.

Vicente pointed out that the definition of torture no longer merely encompasses physical acts of torture, that psychological acts of cruelty such as keeping a prisoner in solitary confinement for prolonged periods clearly qualify as well.

Deliberate acts such as sleep deprivation or sound torture, which have become known recently as part of the euphemistically dubbed “enhanced interrogation techniques” by the US government, also amount to torture.

In addition, withholding medical care that causes severe suffering for no justifiable reason can be considered cruel and inhuman, and, in some cases where there are state involvement and specific intent, it can be considered torture.

Philip Luther, director of research and advocacy at Amnesty International has said in a 2018 report that “deliberately denying medical treatment to any prisoner is cruel, inhuman, and can amount to torture”.

According to Hussein Baoumi, Egypt researcher with Amnesty International, prisons and police stations in Egypt are severely overcrowded, constituting health risks to prisoners both in the immediate and longer-term.

Several former political prisoners spoke to Al Jazeera about being denied medical treatment in Egyptian prisons and the long-term dire consequences this has had on their health. In some cases, even relatively small injuries became critically debilitating after being neglected by prison authorities.

Islam Mohammed spoke to Al Jazeera about taking part in a protest in Alexandra in early 2015 during which his friend and fellow protester, 17-year-old Muhannad Ehab, was arrested and imprisoned in Borg el-Arab prison. Islam said that Muhannad suffered from leukaemia at the time of his detention but was denied treatment in prison.

Upon his release, after just over a year in prison, Muhannad’s family took him to the US for treatment but he died of his condition in October 2016.

According to the standards adopted by the Office of the High Commissioner for Human Rights: “Sick prisoners who require specialist treatment shall be transferred to specialised institutions or to civil hospitals.”

Fatima Abdul Hadi spoke to Al Jazeera about her journalist brother, Islam Jumaah Abdul Hadi, who was sentenced to life imprisonment and is still held in Wadi el-Natroun prison, accused of espionage.

Islam Abdul Hadi, who is suffering from chronic hypertension, had open-heart surgery as a child as well as four surgeries on his kidneys. During his intake at Egypt’s notorious Tora prison, Islam was diagnosed with a suspected severe ulcer that caused continuous internal bleeding.

However, the jail authorities refused to send him to a hospital to perform diagnostic tests. He was subsequently moved to Wadi el-Natroun, where he is currently in solitary confinement and receives medication only when his family are permitted to bring it in for him.

A former prisoner, who wanted to remain anonymous, told Al Jazeera that he was arrested a few years ago and held for almost two years. He has suffered from infantile paralysis in his left leg since childhood and walked with the aid of a crutch, in addition, chronic lumbar pain meant he could not sleep on the ground.

His condition deteriorated in jail where, in spite of his paralysis, he was sent to solitary confinement for a full week, during which he had to sleep on the ground. “This increased the inflammation in my back and damaged the nerves in my leg,” he told Al Jazeera.

“I tried on a weekly basis to see the orthopaedic doctor and when I finally managed to see them he shouted: ‘You come every week, do not come again!’ and refused to help me.”

Since being released, he still suffers from the pain in his paralysed leg and injured vertebrae.

Al Jazeera made attempts to contact the Egyptian Ministry of Interior in Cairo for comment but has yet to receive a reply.

The denial of medical treatment to prisoners extends far beyond Egypt. Sami al-Hajj, an Al Jazeera journalist and former prisoner at the US-run prison camp in Guantanamo Bay, Cuba, spoke about his experiences, which he said amounted to a perversion of the principle of medical care.

According to al-Hajj, even when prison doctors did tend to inmates, some of the medication given to his fellow prisoners caused them to have hallucinations.

According to the report, this is part of a broader tendency of Iranian authorities to not provide adequate healthcare in prisons.

According to Baoumi, the neglected, hidden crisis of withholding medical care from political prisoners needs urgent action by the international community.

In the words of the ICRC, “prison health is public health”.

Egyptians in solidarity with Syrian refugees against campaign of incitement