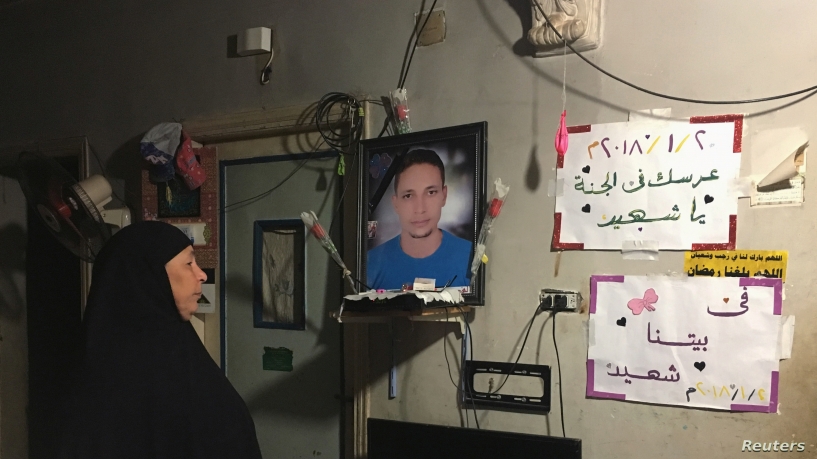 KAFR AL-SHEIKH, EGYPT – Security forces detained Lotfy Ibrahim, a young construction worker, as he left a mosque near his home on the Nile Delta in the spring of 2015. When his family finally saw him again nearly three months later, he was in jail, looking badly brutalized.

“He rolled his sleeves down so we couldn’t see the signs of torture,” said Ibrahim’s mother, Tahany. “But I saw burns on his arm. His face was pale, and his hair was shaved off.”

Ibrahim, then 20, was eventually tried on charges of murdering three military academy students in a roadside bombing.

He swore his innocence. His family said his lawyer had proof in the shape of a confession by the real perpetrators. But the lawyer was arrested and the new evidence was ignored by the authorities, the family said. Reuters didn’t see the confession.

In early 2016, almost a year after Ibrahim’s arrest, a military court found him guilty and sentenced him to death. From his prison cell, he wrote a letter to his family. It contained a message to the father of one of the murdered cadets.

“I don’t have your son’s blood on my hands and everyone knows that,” Ibrahim said. “Please pray for me, I forgive you.”

When he put down his pen he was led away to the gallows, Ibrahim’s mother said. He was hanged in January 2018, a few months after his lawyer’s arrest.

Egyptian courts have sentenced some 3,000 people to death since 2014, when President Abdel Fatah el-Sissi took power, according to the Arab Network for Human Rights Information, an independent organization that documents human rights violations in the Middle East and North Africa. That compares with fewer than 800 death sentences in the previous six years, according to Amnesty International.

Most sentences are overturned at appeal and statistics on the number of executions carried out are hard to come by. Egypt doesn’t publish official figures; newspapers and local media outlets close to the government are the most detailed sources of information. Reuters reviewed media reports over a period of 10 years and interviewed Egyptian and international human rights researchers. Amnesty International shared its data. This reporting showed that at least 179 people were executed from 2014 to May 2019, up from 10 people in the previous six years.

Crimes for which capital punishment is being meted out have included forming a terrorist group, use of explosives and rape.

The deadly punishments are part of a wider crackdown against Islamists by the government of Sissi, a former general. Sissi became president in 2014, a year after the military ousted Egypt’s first democratically elected president, Mohammed Mursi of the Muslim Brotherhood. The Brotherhood has since been banned and its members driven underground.

“Those numbers are unprecedented,” said Gamal Eid, founder and director of the Arab Network for Human Rights Information. “This is political revenge.”

The Egyptian government did not respond to detailed questions from Reuters for this article.

Egypt has consistently said it is fighting terrorism. In February, Sissi told visiting European Union leaders that the Middle East and Europe had “two different cultures.” When terrorists kill, the victims’ families want blood, “and that right must be given through the law.”

“The priority in Europe is achieving and maintaining well-being for its people. Our priority is preserving our countries and stopping them from collapse, destruction and ruin,” he said.

Reuters spoke to the families of seven young men who have been executed or are on death row. Ibrahim’s parents said their son didn’t belong to the Muslim Brotherhood, although his father is a member. Each family said the accused was tortured and denied access to a lawyer. For weeks or months, relatives had no idea where the men were being held. Human rights groups say many executions were carried out after flawed trials. Egyptian authorities did not respond to requests for comment.

Some executions have taken place after an attack by Islamist militants. The timings of those executions “suggest a troubling trend on the part of the government in which executions appear to be tools of revenge following terrorist attacks rather than a part of an orderly criminal justice system,” said Timothy Kaldas, non-resident fellow at the Tahrir Institute for Middle East Policy.

Mohamed Zaree, a human rights activist and a director at the Cairo Institute for Human Rights Studies, a nongovernmental organization that produces analysis and research, said the authorities feel “they have to present something to public opinion. They have to show bodies. It doesn’t matter if they did it or not.”

Ibrahim and three other young men convicted of the roadside bombing were hanged four days after Islamic State gunmen attacked a church and a Christian store in Cairo, killing at least 11 people.

In the summer of 2015, Sissi declared that Egypt’s criminal code wasn’t fit for purpose. Egypt was facing terrorism, he said, and needed courts and laws capable of delivering justice swiftly.

“We won’t spend five or 10 years trying people who kill us. When a death sentence is issued, it shall be carried out,” he said. “We will amend the laws.”

He was speaking at the funeral of public prosecutor Hisham Barakat, murdered in a car bombing that authorities blamed on the Muslim Brotherhood and Palestinian group Hamas. In 2016, the government said 14 members of the Brotherhood had confessed to the killing. The Brotherhood, which says it is a peaceful organization, denied any role.

Barakat’s assassination shocked the government: He was the highest-ranking official to be killed in decades. A month after his murder, Egypt introduced a new anti-terrorism law that imposed the death penalty or life imprisonment on anyone convicted of establishing, organizing or financing a terrorist group.

“The trend of handing down death sentences started before the prosecutor was killed, but after the assassination it escalated,” said Mona Seif, co-founder of No to Military Trials, an independent group that tracks and assists civilians tried by military court. By the end of 2016, there were executions almost every month. This, Seif said, was how the authorities tried to instill fear.

“There are no repercussions for whatever the authorities do internally or internationally,” she said, “so why not?”

In 2017, a further set of amendments gave courts the power to refuse to hear all or some witnesses for the defense and limited the defense’s opportunities to appeal. Amnesty International said the changes were “paving the way for mass death sentences and executions.”

In recent years, dozens of judges have been forced into retirement, moved from criminal courts and even put on trial. In April, the constitution was revised to give Sissi new powers over appointing judges and the public prosecutor.

Ahmed al-Degwy was one of dozens of young men rounded up by security forces in the weeks after Barakat’s murder.

The engineering student was held without access to a lawyer, tortured with electric shocks and denied medicine for his diabetes, said his mother, Ghada Mohamed. Reuters couldn’t independently verify this account. Ghada Mohamed’s son was a supporter of the Muslim Brotherhood, she said, but his only connection to Barakat was that they lived in the same Cairo neighborhood.

Another of the accused, Mahmoud al-Ahmadi, testified at the mass trial in the Barakat assassination that the defendants had been tortured. “We’ve been very thoroughly electrocuted,” he said in a video that was shared on social media. “We’ve had enough electricity to power Egypt for 20 years.”

Twenty-eight men were convicted of Barakat’s killing and sentenced to death in 2017. They included al-Degwy and al-Ahmadi. The Court of Cassation upheld the two men’s sentences in late 2018.

Family and friends of the dead began arriving at Cairo’s Zynhom morgue shortly after they heard the news. A Reuters journalist was there. Running prayer beads through his fingers, al-Degwy’s father stared at the mortuary gate. A white shroud to dress his son’s body lay on the ground beside him. Al-Degwy’s sister darted around anxiously. Friends tried to comfort her.

A judicial source said authorities are worried that prisoners might send messages via their families if they are allowed to see them. A police officer at the mortuary said authorities don’t inform relatives prior to executions “for security reasons.”

“We can’t tell them the date, no one knows, even the prisoners aren’t told. They could commit suicide if we told them,” the police officer said. “Not all laws are enforced here. This is a state policy, bigger than you and I.”

Al-Degwy’s family hadn’t seen him for over a year, his mother said. They’d been denied access to the high-security facility where he was held awaiting sentence — the notoriously harsh Tora prison, known as “scorpion prison,” south of Cairo.

“We are in a country where humans have no value,” she said tearfully. “This is political and legal chaos, and the country is heading toward a dark tunnel.”

Egypt’s forensic authority submitted evidence of the torture of another suspect, student Essam Atta, to the court that tried him. It did not help his case.

On the day Atta handed himself over to police for questioning about the shooting of an officer, his father, Mohammed, brought food to the station. Atta was in the fourth year of a graphic design course at Ismailia University and had no interest in politics, Mohammed said. Atta told his family he’d done nothing wrong. His father, who’d told Atta to turn himself in, was sure his son would soon be home.

But Mohammed was turned away from the police station. He tried again the following day.

“Officials there kept denying that he was being held inside and denied that they knew anything about his whereabouts,” Mohammed said. But he could hear his son screaming inside the building. “I was shattered. I couldn’t bear it.”

Several days later, Atta and six other men appeared on a pro-state television channel looking bruised, disheveled and weak, before confessing to their role in the killing of the policeman. Their families saw them on TV but didn’t know where they were being held.

A report by Egypt’s forensic authority, prepared for the trial judge and reviewed by Reuters, concluded it was “technically possible” that Atta and his co-defendants were “assaulted using a wooden stick, bamboo, electric taser and some were burned with cigarettes.” They also appeared to have been kept in handcuffs for a long period, said the report, which hasn’t been reported previously.

Co-defendant Hazem Mohamed Salah is now on death row at Al-Abadiya jail in Damanhur. He told his family that he was tortured for several days and then taken into the prosecutor’s office.

“The prosecutor told him to sit down and offered him a glass of hibiscus, and then told him to sign the confession without asking him a single question,” said his sister, Dina. He drank the juice, a common refreshment in Egypt, and signed quietly.

A lawyer involved in the case, Shibl Abou al-Mahasen, confirmed this account.

Six years on, Atta, now in his early twenties, is sitting on death row. He was sentenced in 2017; the verdict was upheld in November 2018. According to an Amnesty researcher, there are 61 men on death row, most of them political prisoners.

Atta’s family says he signed a confession under duress, and he was questioned without a lawyer.

“I regret handing him in,” said Atta’s father. “I thought that there was rule of law in the country and that they would listen when he told his part of the story. But my son was beaten up, electrocuted and humiliated.”

Losses in Egypt stock exchange due to geopolitical tension