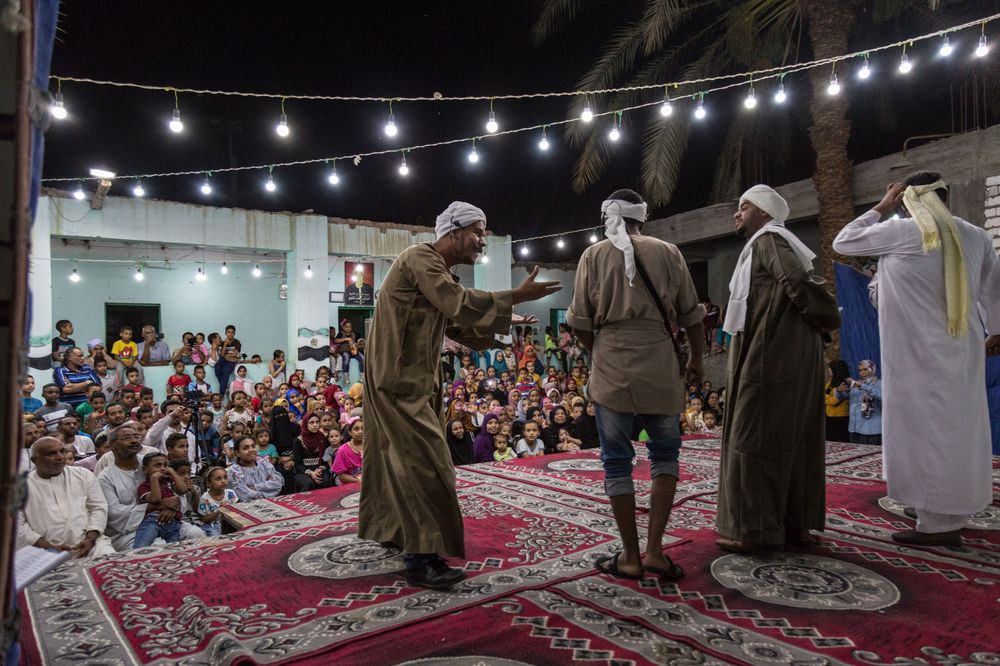 Packed into an open-air theater to watch a play on climate change, the Egyptian villagers near the ancient city of Luxor rock with laughter — even though it’s a performance about life and death.

“What’s your secret?” asks one actor, playing a farmer who notices his neighbor’s wheat crop is twice the size of his own. “I’m adapting to al-taghayorat al-monakhiya,” the other actor replies, using the Arabic term for climate change. “Al-molokhiya?,” the first says, sparking comic confusion by naming a traditional stew made from jute mallow leaves.

The theater troupe is spearheading a government response to a heatwave nine years ago that slashed output of wheat, a staple of Egypt’s almost 100 million people. The play encourages villagers to cooperate by combining their smallholdings to maximize output and use irrigation and farming techniques to cope with climate change and hotter weather in the south.

Global warming is a huge issue for Egypt, where agriculture provides an estimated 28% of all jobs. The World Food Programme, which funds the actors’ project, said climate change threatens to cut food production in southern Egypt by at least 30% by 2050.

The “alarm bell” for climate change in Egypt was a heatwave in 2010 that devastated the country’s wheat harvest, said Ali Hozayen, who is in charge of rural development and food-aid projects at Egypt’s agriculture ministry.

A recent play in the village of El-Boghdadi, also near Luxor, told the story of a farmer who refuses to work with his neighbors to combat climate change or help pay for lining an irrigation canal. When he faces death after being bitten by a snake, he realizes the error of this ways.

The acting troupe regularly travels through about 50 villages in southern Egypt, and the plays are couched in the local culture and distinctive accent.

The program initially met some resistance. “How are we going to change God’s weather?” an older farmer asked during one of the early meetings, according to Othman Al-Shaikh, the head of the initiative.

The theater’s benefits are tangible in villages like El-Boghdadi. The project also teaches farmers how to conserve water and encourages them to remove fences and walls separating land holdings. Solar-powered irrigation pumps have replaced expensive diesel ones, and weather warnings are broadcast in local mosques and via a mobile-phone app.

The measures have increased wheat output by 30% to 40% and sugarcane by 25% to 30%, while reducing water use by as much as 30%, according to Al-Shaikh. The program hopes to expand to five more northerly provinces with additional funding.

“Now you can ask any kid what climate change is and they’ll know the answer,” Al-Shaikh said.

Huda Najui, a widow and a mother of three girls, started raising ducks and goats after learning about the project’s small loans at a performance two years earlier.

“I’m financially independent now, but I’m just here to enjoy a good laugh,” she said, sitting with her family in front-row seats for the performance.

Ali Murtada, a farmer in El-Boghdadi who remembers the 2010 heatwave well, said the measures helped double his wheat harvest.

“Climate change might be something the rest of the world think of as a worrying future scenario,” he said. “But we’re living it.”