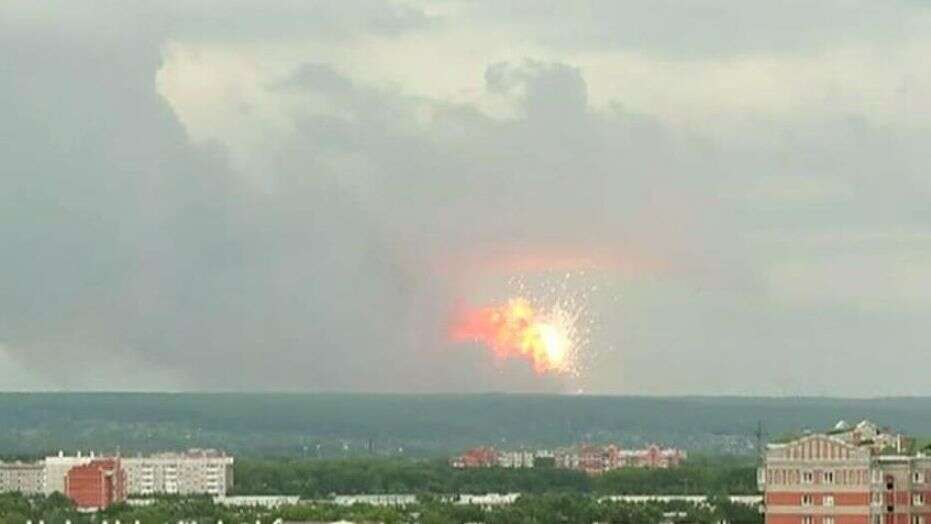 Thousands of kilometres from Cairo a nuclear explosion rocked the Russian city of Severodvinsk. The explosion was analysed by the whole world, but the Egyptians had greater reasons to worry.

The Russian nuclear reactor at the site of the explosion is supervised by the Russian company Rosatom, as is the nuclear reactor Dabaa in northern Egypt. But that was not the only cause of concern for Egyptians. Cairo imports large quantities of Russian wheat, which may be affected by high radiation levels from the explosion.

The Russian justification for the explosion was even more disturbing. A top official at the institute where the explosion happened said that a failed missile test which resulted in an explosion killing five scientists last week on Russia’s White Sea involved a small nuclear reactor. In nuclear reactors, safety means should not be lax, whether it is a big or a small reactor.

Later conflicting news emerged and Russian officials said it was not a reactor, but a radioisotope aircraft engine, and that the experiment took place in an open field.

A statement was also issued by officials in the nearby city of the incident that said an increase in radiation was observed for a short time without clarifying the magnitude of the radiation. The statement was then removed from the website.

A statement published on the Egyptian government Facebook page said: “On the incident in Russia and the associated consequences and the attempt to link it to the nuclear power plant in Dabaa, the Nuclear Power Plants Authority confirms that there is absolutely no connection between the experiment that was taking place on one of the nuclear fuel missiles and between nuclear power plants in general.”

A number of Russian nuclear accidents took place this summer alone, all of which Moscow has published only delayed, vague information about.

Since the 1986 Chernobyl disaster, when Russia kept quiet about what happened, it does not have a good reputation concerning nuclear reactors.

Egyptians on social media websites immediately linked the Russian nuclear explosion to the Rosatom Dabaa reactor. The Egyptian government issued a statement denying any link between the explosion in Russia and the Dabaa nuclear power plant in Egypt.

The statement came after thousands of comments from Egyptians via social media in which they expressed their fears of Russia’s ability to implement project Dabaa safely.

The statement tried to reassure Egyptians: “The Dabaa nuclear power plant is third generation developed and has a double containment building that can withstand the impact of a plane weighing 400 tons loaded with fuel and fly at a speed of 150 metres per second and with a seismic wheel up to 0.3 and bear a tsunami up to 14 metres, as well as its ability to extinguish automatic safe without human intervention.”

The Dabaa reactor “is also equipped with the trap of the reactor core when it melts, which does not exceed the probability of the occurrence of one in 10 million reactors per year. It also contains repetitive and other safety means.”

The statement stressed that “everything that has been raised about the connection between the Russian explosion and the Dabaa reactor is totally misplaced.”

However, the fact that many Egyptians look at the issue without going into the figures mentioned in the Egyptian government statement means they simply know that the company that is building the Egyptian reactor is the same company responsible for the explosion in Russia. Why did it not apply these safety standards there? What is the guarantee that the company will apply these standards in Egypt?

Not Dabaa but wheat

The second cause for concern is the effect of radiation from the explosion on the wheat harvest there. The Egyptian government imports wheat from Russia in large quantities.

According to the Egyptian Minister of Supply, Ali Moselhi, the Egyptian government imported in the last year 6 million tons of wheat and Russia is one of the top countries from which Cairo imports wheat. Egypt imports wheat through the tender system, which means that any contaminated wheat will be cheaper.

In a bid to reassure Egyptians the Agriculture Ministry said it would not compromise on the safety of imported products. The ministry said it had approached Egyptian officials on a trade representation in Russia to make sure agricultural areas were not affected by the latest nuclear explosion and to take any further action if necessary.

It also said it was checking all shipments of grain, including wheat from Russia. Nevertheless the problem, which some have pointed out, is that the screening devices used by the ministry to check shipments and wheat do not include a radiological examination, because it does not have it.

The government responded that representatives of Egypt’s Atomic Energy Authority would be at ports to inspect wheat shipments from Russia.

Ahmed al-Attar, head of the Central Department of Agricultural Quarantine at the Ministry of Agriculture, said that precautionary measures have been stepped up in ports concerning importing wheat from Russia and checking the coming agricultural commodities to make sure they are free from any nuclear radiation resulting from the explosion.

According to data from Russia, which was later deleted, radiation levels rose from 4 to 16 times in the city of Severodvinsk as a result of a nuclear explosion last Thursday.

Egyptian government officials say the city is located in northern Russia, a very cold area, where wheat imported by Egypt is not grown, but at the same time they announced a radioactive examination of Russian wheat.

Egyptians are concerned about the safety of food from Russia, especially as previous corruption cases meant wheat was in the market in 2017 despite the assertion by food control authorities in ports that it is not usable.

In the pandemic: Egyptians stranded abroad with the government disabled