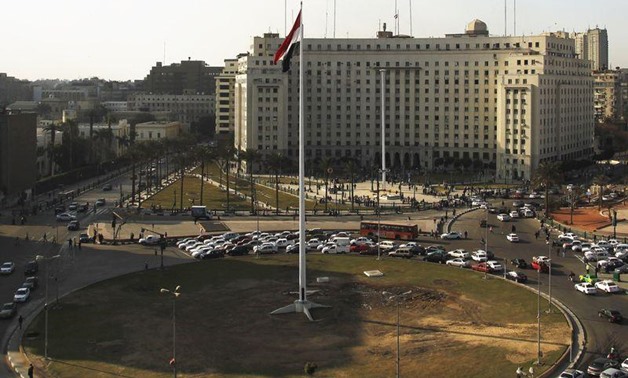 Egyptian authorities arrested six foreigners and an Egyptian in Tahrir Square on Friday, September 20; they were assuming tasks related to the protests due to take place on the same day upon the calls of Spain-based contractor Mohamed Ali.

Ali fled to Spain because of his indebtedness to banks and suppliers. The contractor claims the Armed Forces Engineering Authority, which has retained his services for 16 years, owes him LE 220 million ($13.48 million). In September 2019, he started a series of videos attacking the regime. The contractor had first presented himself as a whistleblower before he began to foment a revolution to topple incumbent President Abdel Fatah al-Sisi.

TV presenter Amr Adib broadcast on Tuesday a video he acquired of the individuals arrested, showing their passports and video-taped confessions. That was during an episode of his Talk Show “Al Hekaya” on MBC Misr. On Wednesday, the video was circulating on all media platforms.

The foreigners arrested include two Jordanians, two Turkish, a Palestinian, and a Dutch. The following are the details:

Ashraf Asaad Ahmed Tafesh, 29, is a Palestinian who entered through Rafah crossing on September 18. He is member of Hamas-affiliated jihadist cells, Saraya al-Quds, and a secret monitoring and communication agent. In 2013, he joined an Islamic Jihad group and performed tasks pertinent to information collection. Tafesh headed to Egypt upon the orders of the group leaders to report the updates of possible demonstrations scheduled on Friday so they would support the aim for revolution. Tafesh resided in Sunshine Hotel near Tahrir square.

Peter Bas Haroun, 43, is a Dutch who arrived to Cairo International Airport on September 14 and resided in a downtown hotel called Osiris. He was arrested while flying a drone at the hotel’s rooftop as the footage would be communicated to foreign entities. Investigations indicated that Haroun was always in contact with individuals amassing protesters in Tahrir. He said in a video-taped confession that a hotel employee saw him and said “that is a big problem.” When he went back to his room, the police came and arrested him. Haroun claims he did not know his act was a breach to Egyptian laws restricting the use of drones to individuals who carry licenses for specific purposes.

Berat Bertan Odgan, 46, is a Turkish national who landed in Cairo International Airport on September 22 and resided in Sofitel Cairo Nile El Gezirah. He was arrested while taking photos of “people and security services” in Tahrir Square area, and communicating with individuals amassing protesters.

Thaer Essam Fahmy, 24, is a Jordanian who entered Egypt on September 4 through Al Aqaba port, and resided in Cairo’s Al Basatin neighborhood. He is an opponent of the Jordanian government as he was a member of the Jordanian Communist Party.

Fahmy has been observing the Egyptian political scene since the January 25 Revolution in 2011 until June 30 Revolution in 2013. He perceived the latter as a coup against Mohamed Morsi’s legitimate rule so he supported the calls of Mohamed Ali to take to the streets to topple the regime. Fahmy, who used to call for demonstrations on social media, came to Egypt to participate in sparking protests.

When arrested, Fahmy was accompanied by a fellow Jordanian called Abdel Rahman Ali Mohamed. They intended to take photos and shoot videos that would be posted on social media to promote that a revolution was happening.

Abdel Rahman Ali Mohamed, 24, is a Jordanian who arrived at Borg Al Arab International Port on September 5. He was also a member of the Jordanian Communist Party and used to protest against his country’s government. Mohamed shared the same views as Fahmy on Egyptian politics. He is a follower of social media pages that attack the incumbent Egyptian regime and state. Driven by Mohamed Ali’s videos, Mohamed protested in Tahrir square, where he was arrested. He had a laptop, flash drives having photos of protests in Jordan, and reports on developments on the Egyptian scene. Mohamed shot videos to be posted on Facebook, and was providing financial and technical assistance to protesters.

Abdulla Kaymak, 22, a Turkish national who arrived at Cairo International Airport on June 18, and lived in Giza’s King Faisal Street. He was arrested in Tahrir Square while taking photos of youth trying to gather to start demonstrations. Kaymak was following calls for protests on social media and came to Egypt to watch them.

Mostafa Ahmed Mostafa, 34, is an Egyptian who returned on August 24 as he used to work in Saudi Arabia. In 2014, he was arrested in relation to a Muslim-Brotherhood case so he left the country after his release. Mostafa joined the brotherhood in 2012 and participated in Rabaa and Nahda sit-ins. In light of Mohamed Ali’s videos, he was instructed by the group leaders to receive a sum worth $5,800 and change it into Egyptian pounds to be distributed among youth to take part in demonstrations. Mostafa was arrested in Tahrir Square as he possessed $5,700.

The demonstrations that took place mainly in Cairo’s Tahrir Square and Suez governorate were very small and lasted for very little time following the final match of the Egyptian Super Cup. Mohamed Ali still calls for protests on Friday, September 27.

Patriotism and soft power: how Egypt sought to gain from Afcon