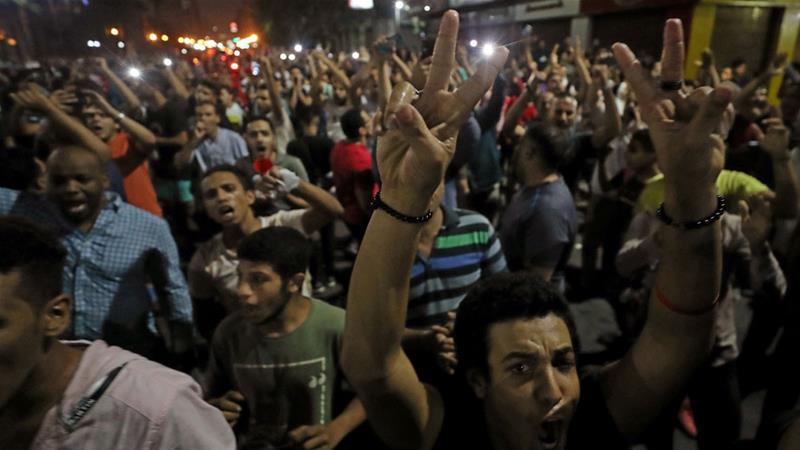 Less than a week after the rare demonstrations organised by opponents of the Egyptian regime, the number of detainees reached over 1,500. These arrests included university professors, political party leaders, journalists, human rights activists, lawyers and the youth who had never participated in any previous demonstrations.

The security campaigns targeted almost all political currents, including people and parties who had supported the regime in its infancy. Because of the variety in age and political orientation, the arrest campaign can no longer be named the Brotherhood arrests, as they were at one time, or Islamist arrests, leftists, liberals, or even young people.

Human rights activists have described what happened as the “September arrests” because it has been a month of fierce arrests. “September arrests” is the term reminiscent of the arrests carried out by the late President Anwar Sadat in September 1981. Historians considered that Sadat’s regime was practically finished by these arrests, even before he was killed in October 1981, one month later.

Later, journalist Mohamed Hassanein Heikal recounted the events of the period in a book “Autumn of Wrath.” Heikal said that the idea for the book began from the first moment of his arrest on 3 September 1981, when he turned and saw around him in prison all those who represent the living symbols of the most important political and intellectual currents in Egypt. It was realised at the time that the great gambler played his last big game, and risked all his cards at once.

In September 2019, al-Sisi arrested almost all the famous men from across political currents, leaving only fragile parties that support him in all his decisions, and dare not express any opinion contrary to his directives. Observers say that al-Sisi is no longer the leader of the country, even if his regime remains standing on security repression and arrests.

Although al-Sisi’s opponents have already organised demonstrations bigger than what happened on 20 September, all these earlier demonstrations were predominantly affiliated with a particular political movement, especially the Islamists.

The difference is that the recent September demonstrations were not affiliated with a certain political trend, and that they came after years of fear of al-Sisi’s iron fist that runs the country. These demonstrations have cracked the wall of fear that al-Sisi has built over the past six years, and mass arrests have increased public anger at the regime.

Opponents say that Egypt is currently witnessing the end of military rule, but observers say it will difficult for the army to emerge from the field of politics and governance in the near future. To be more accurate, Egypt is witnessing the “General’s Autumn” – Al-Sisi, who ruled the country with an iron fist and took control of its institutions with iron and fire after he ousted the country’s first democratically elected civilian president.

The problem al-Sisi faces is that he has two options, each of which he will lose. The first option is to allow peaceful demonstrations, in which case the number of demonstrators is predicted by observers to reach millions, especially since the al-Sisi regime has made enemies in all political currents and among all types of people.

Al-Sisi’s regime is expected to end in days. If these peaceful demonstrations are allowed, the families of detainees and the poor will fill the streets. Massive numbers have been affected by the general’s rule and economic and repressive policies.

The second option is to continue repression, to expand arrests and imprisonment of demonstrators and politicians, and to increase the degree of murder and brutality carried out by his security services. But that option could cause the country to plunge into a bloody revolt, or force any military leader to overthrow the al-Sisi regime and the security forces cannot confront almost all segments of the population.

Even if al-Sisi is lucky and is able to suppress popular demonstrations and remain in power, the general has ended popularly and politically this fall, and everyone is more than ever aware that he is authoritarian and corrupt, and that all his promises to build a modern state and a strong economy are just nonsense uttered to thwart popular anger.

How did Sisi benefit from the Israel and Hamas conflict?