EgyptWatch
Home Egypt Watch According to al-Sisi, art is in the service of power 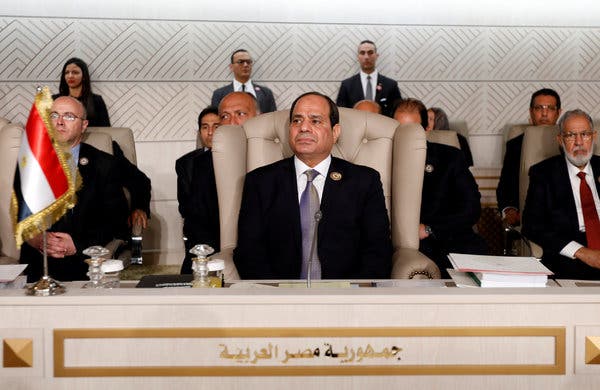 Between Cairo’s squares and art arenas, things look very similar. The security authorities and state organs celebrate everything that Egyptian President Abdel Fattah al-Sisi supports, while repressing everything he opposes. This rule is not limited to street demonstrations, but also to singing and acting.

The security forces distributed water, juice and meals to the demonstrators who came out in support of al-Sisi, at the same time they were arresting demonstrators opposed to him, and beating them with batons.

Tensions and the hashtag war still exist on social networking sites in Egypt between supporters of al-Sisi and supporters of Egyptian entrepreneur Mohamed Ali, who sparked controversy recently after he published videos accusing al-Sisi and senior military officials of “corruption.” But a confrontation of another kind began to emerge recently – songs and counter songs.

The new confrontation began after the Egyptian satirical “studio 25,” which broadcasts on social media, posted music videos against President al-Sisi and in support of Mohamed Ali.

Then, Egyptian actor Mohamed Ramadan launched a new song titled “They want Chaos” on Wednesday to respond to the videos published by the Egyptian contractor Mohamed Ali and the protests that accompanied them. The song was broadcast by pro-regime channels. In contrast, the song “Mohamed Ali” was met with total disregard.

Ramadan’s song is not the first pro-Sisi song. Since the overthrow of Egyptian President Mohamed Morsi, many singers have recorded songs in support of the Egyptian regime.

Channels supporting the Egyptian regime repeatedly broadcast songs such as “Teslam al-Ayadi,” “Bushrat Kheir,” and others. Singers and actors have made a number of videos declaring their support for al-Sisi in the face of recent demonstrations.

Although representatives and singers have repeatedly endorsed al-Sisi, the general has been dissatisfied with the performance of actors more than once.

Al-Sisi has repeatedly said that actors and singers should raise people’s awareness and explain what is happening, in what seemed to be a signal to rally support for him. However, the Egyptian regime does not appear to be interested in actors or singers. On the contrary, the new regime has banned a number of series for no apparent reason.

For example, the Egyptian regime prevented the Egyptian actor Adel Emam from completing his series which was set to be shown during Ramadan, the main season for series. The Egyptian regime says that it does not interfere in this, and that the prohibition of the series came for financial reasons. But in fact the Egyptian army took control of the art production companies, which paid more to produce other series.

The termination of Adel Emam’s contract followed his rare criticism of the Egyptian regime’s policies to censor art.

Egyptian actress Ghada Adel spoke more clearly about a company called “Egyptian Media” responsible for the exclusion of a number of actors. Ghada Adel’s comments were met with a strong attack from pro-regime channels. Egyptian Media Company is a company run by the General Intelligence Service.

Many singers and actors try to support al-Sisi at all times, thinking that this will protect them from exclusion. But only one mistake would be enough to exclude them and terminate their contracts.

A buffer zone in Libya: Will Egypt repeat Turkey’s strategy in...