EgyptWatch
Home Reports Mohammed Al-Baqir: The imprisoned lawyer who turned into a symbol of justice 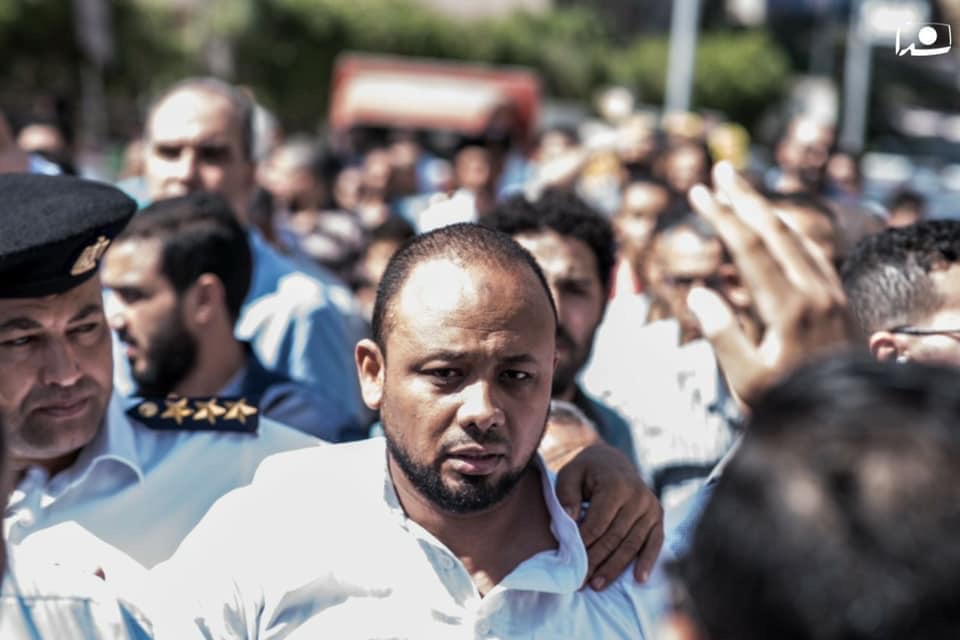 While the prominent human rights lawyer Mohammad Al-Baqir was attending investigations atthe supreme state security prosecution with the political activist Alaa Abd al-Fattah at the end of September, he was surprised that the prosecution ordered that he be detained and informed him that he is wanted under the same case.

The prosecution accused Al-Baqir of “belonging to a terrorist group, financing terrorism, spreading false news that undermines national security,” and then ordered his preventive detention. After that, he wastransferred blindfolded to al-Aqrab Prison, the prison with the worst reputation in Egypt.

Al-Baqir was physically and verbally abused, hisbasic rights were violated from the moment he entered prison. He was forced to walk while bending his back, showered by insults and abuse. He was stripped of all his belongings, even his personal hygiene items. They put on his prison clothes while he was blindfolded and he was driven to a cell while not being allowed to shower or change his underclothes for nine days. The prison administration also refused al-Baqir’s request to see the prison doctor and prevented him from buying clean food or water, his wife said.

The prosecution delayed the decision on a request made by Al-Baqir’s lawyer to enable him to visit his ill father, who was in intensive care. He died before seeing his son, but al-Baqir was allowed to attend the funeral.

Egyptian authorities are currently carrying out a systematic campaign targeting human rights lawyers who took on the mission of defending those arrested after the demonstrations of September 20, that demanded the toppling of President Abdul Fattah al-Sisi’s regime and accused it of corruption. Among the most prominent that have been arrested along with al-Baqir are Mahienour el-Massry, and Amr Imam.

Although the campaign seems systematic, the arrest and torture of Mohammed al-Baqir is a punishment for his rich career in defending human rights, which he began about five years ago when he decided to leave his successful trading company and devote himself to defending rights and freedoms to start from scratch in the field of law and human rights work. He gives himself space despite all the tough security conditions that Egypt has witnessed since the military coup in 2013.

Al-Baqir entered the human rights field at a time when many were moving away from the field out offear of the authority’s repression. He came from an economic background and it’s is rare for a person to leave the world of trade and business to enter the world of jurists with all the dangers present in a country like Egypt. He founded the Justice for Rights and Freedoms Centre, which is one of the most prominent human rights centres now in Egypt thatpractices its work despite all restrictions and security repression.

He is one of the contributors to the establishment of the Masr AlQaweya (Strong Egypt) Party, and he was a member of the party’s supreme council. Masr AlQaweya was one of the parties that strongly opposed the al-Sisi regime before suspending its activities after the detention of the known political party leader Dr. Abdul Moneim Aboul al-Fatouh, and the detention of the party Vice-President,Professor Mohammad al-Qassas.

Al-Baqir, from the Nubian village of Abram in southern Egypt, was known among the Egyptian jurists for his dark, authentic features, his quiet, wise smile, and his Salafi affiliation, which was never a barrier between him and anyone he defended with their own ideological, intellectual and political beliefs.

Al-Baqir enjoys the love and respect of all human rights workers in Egypt, so as soon as news of his arrest spread, the human rights community turned into a beehive to write about al-Baqir and his firm beliefs in defending human rights.

“Muhammad al-Baqir is the first human rights lawyer to be imprisoned since Muhammad Sayed Said, Amir Salem, Hisham Mubarak, Muhammad Mundour, and Hafez Abu Sa’da,” wrote prominent human rights lawyer Nejad al-Borai. “Perhaps he won’t be the last, but all of this will not dissuade them from a position they chose; just witnesses who do not carry any grudge nor seek any wealth; and they hand over their own freedom and honour in return for others.”

The writer and researcher Khaled Mansour wrote: “Mohammad Al-Baqir is a lawyer, a human rights defender and a man who is an example of kindness and modesty. I truly have seen Mohammad put people before himself many times, and he always surprises others when they see him with his Salafi beard defending those who are ideologically different from him… but they do not know Mohammed, they do not know who defends them, and they stereotype people in narrow arenas and under worn out flags.”

The UN High Commission for Human Rights condemned the detention of Egyptian activists, including Al-Baqir, and demanded Egypt hold an urgent and effective investigation into allegations of torture and maltreatment during their detention.

Amnesty International condemned Al-Baqir’s arrestand demanded his immediate release and thatcharges against him are dropped.

Coronavirus: One of the strangest reasons for detention in Egypt