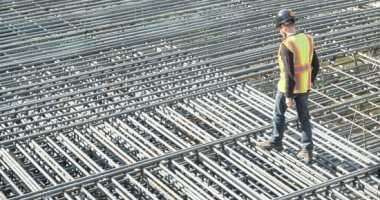 The monthly report issued by the Ministry of Housing and Utilities for
the month of December 2019 has revealed that revenues in the
construction sector in Egypt have continued to decline.
The report confirmed the decline in the price of building materials
during December, compared to the same period in 2018, by rates
exceeding 30 per cent, as a result of the recession that has hit the real
estate market.
The price of a ton of iron decreased 16.8 per cent to EGP 10,400, while
for Ezz Steel, the largest producer in Egypt, the price decreased by 4.8
million tons out of 8 million, a record loss of EGP 4.3 billion during the
first nine months of 2019, in return for losses that amounted to EGP
326 million during the same period of 2018.
Iron exports reached $35 million last September, compared to $96
million in the same month in 2018, a decrease of 63.5 per cent.
Suez Cement announced that it achieved a net loss of EGP 495.5 million
during the first nine months of 2019, compared to a net profit of EGP
335.2 million during the same period in 2018, while the company’s
revenues decreased to EGP 4.9 billion from EGP 5.6 billion.
Indicators of the companies operating in the construction sector show
that the market has passed the recession and is on the cusp of a
recession, in light of the decline in the purchasing power of citizens,
which caused a decrease in consumption.