EgyptWatch
Home Reports Egypt’s White Army: A slogan in the media which is not practiced...
Facebook
Twitter
WhatsApp 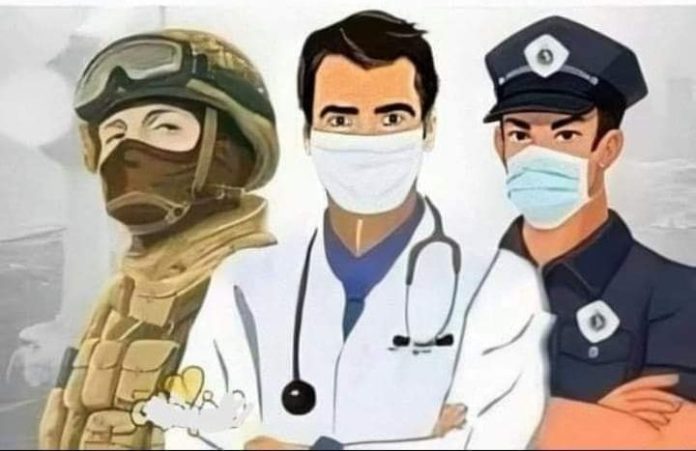 The Egyptian regime has abandoned its financial promises to the medical staff working in quarantine hospitals designated to coronavirus carriers. Medical staff were promised EGP 20,000 ($1,270) as a reward, but the reward has been dropped to almost a quarter ($312). Many of the doctors haven’t even received this.

“Egypt’s White Army” is only for media consumption

In the media, al-Sisi’s regime is calling doctors “Egypt’s White Army” who deserve recognition and respect, but when it comes to paying their financial dues as compensation for years of ignorance they suffered, which led to the migration of tens of thousands of doctors outside the country, it is another thing. Doctor Ahmed Hussien, a former member of the Medical Syndicate’s Council, has revealed to Al-Manasah news website that the Ministry of Health broke its promise to reward the doctors and the nursing staff who are in contact with coronavirus carriers. Information reached the doctors from the ministry that the reward had dropped to EGP 350 ($22.3) daily to the doctors, nursing staff and janitors who are in contact with the infected patients, and EGP 175 ($11) for who are not in contact, such as pharmacists, radiologists, and labs technicians.

Hala Zayed, the Minister of Health, justified the abandonment of such promises saying that the reward was assigned to the doctors who went to El-Negela Hospital at the beginning of the crisis to look after the Egyptian returnees from Wuhan on February 4. Zayed mentioned the presidential decision of the increase of the infection allowance at 75 per cent. After deduction it will range from EGP 250 to 400 monthly ($16-25). “Suffice it to say that the president increased the medical profession allowance. Of course, we know it’s just 300 pounds [$19 but], it’s still a big deal under our country’s conditions.”

A doctor working in the quarantine hospital in Marsa Matrouh said: “We worked for the first 15 days of February. After we complained we received 20,000 pounds fragmented, since then we haven’t received any rewards.” Another nurse working in the same hospital added: “I’ve been a nurse in El-Negela Hospital since the first half of February, but I haven’t received any of the announced rewards, although I have been infected by COVID-19 and am now in quarantine.”

Doctors of 15th of May Hospital in southern Cairo complained about the same problem and an official responded: “There is no money for such things now, the state cannot afford this. It’s unbelievable, the billions collected by the state thanks to the economic procedures followed recently… [and] we waste it on diseases.”

Many doctors and nursing staff explained that seeking the reward is an expression of their will to provide money to their relatives if they die or are unable to work for a long time after being infected, especially since there is no announced compensation for them in both cases of death or infection.

The Medical Syndicate and the Medical Syndicate’s Union announced that they will provide cash support to the families of the doctors who died because of coronavirus or the infected doctors with EGP 100,000 ($635) for every deceased and EGP 20,000 for every infected. The Medical Syndicate emphasised that this amount is just moral support and there is nothing that could compensate their families.  The syndicate also demanded the speedy payment of the promised financial dues of doctors and the hospital workers according to what was announced. The syndicate reminded the cabinet again about the necessity of considering the deaths and the infected medics as martyrs and war heroes, since many doctors were infected by the virus performing their duty to protect the country, and some of them transferred the virus to their families and some of them died.

According to John Gabbour, the representative of WHO in Egypt, 13 per cent of those infected in Egypt are medical sector workers, which means that they are extremely vulnerable.

High prices of commodities and food crops: The crisis every winter...

In Egypt, a judicial release does not mean you are going...

Liquidating a public company: A brief story of corruption in Egypt