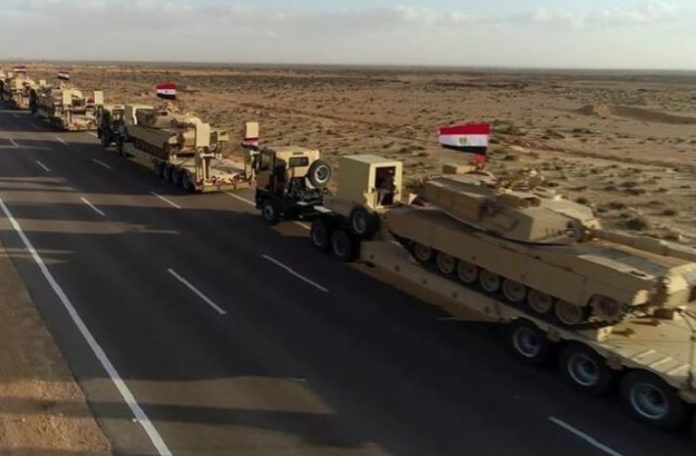 Defence blog Military Affairs reported on Sunday night that the Egyptian armed forces deployed Abrams combat tanks to the border with Libya. The journalist and military aviation analyst Babak Taghvaee posted on his Twitter account a short video showing what he said was an Egyptian military convoy including at least 18 main M1A2 Abrams battle tanks, near the border with Libya. “This video, recorded a few minutes ago, shows the main M1A2 Abrams tanks of the Egyptian army on the border with Libya ready to enter the country for use against Turkish-backed Islamic militias and Syrian mercenaries!” Taghvaee wrote in a tweet. Taghvaee added that at least six Mi-24 attack helicopters were detected in this area.

Activists on social networking sites in Egypt and Libya also shared video clips showing a number of tank carriers and armoured vehicles on a highway near the Matrouh Governorate in northwestern Egypt. Militants and activists have suggested that these military reinforcements are on the way to eastern Libya (Tobruk), controlled by Libyan General Khalifa Haftar, to support his forces after his successive defeats in recent days.

Egyptian citizens told Egypt Watch that these clips were taken in the city of Ras el-Hikma in the Matrouh Governorate, near the border with Libya, and some of them were taken in the city of Dabaa in the same governorate. An intelligence source told Egypt Watch that the Egyptian regime does not intend to interfere directly with the military, but he has not denied the authenticity of these videos. The source said that the reason for the movement of the forces and tanks is not to enter the war in Libya, but rather it is directed to one of the Egyptian military bases in the west of the country.

Egypt has a number of military bases in the northwest of the country, the most famous of which is the Mohamed Naguib base that opened in July 2017, but according to video capture sites, these tanks and military equipment were about 400 kilometres away from the border with Libya, meaning that they passed the Mohamed Naguib base.

The source said that Egypt has a number of other military bases west of the city of Matrouh, smaller than the Mohamed Naguib base. But he refused to answer a question about whether it was customary for those bases to receive huge military reinforcements. He merely said that the reason for these moves could be to increase the security of the western borders in the light of the recent developments, refusing to talk about any possibility of direct military intervention in Libya.

The Egyptian President Abdel Fattah al-Sisi announced on Saturday a political initiative to resolve the ongoing conflict in Libya. Al-Sisi said that the proposed initiative calls for a ceasefire in Libya from Monday. But he did not clarify the nature of the Egyptian response if the Government of National Accord (GNA) did not abide by the ceasefire on that date. Later, the government of national reconciliation announced through political and military officials their rejection of the Egyptian initiative.

For his part, Emirati academic Abdel-Khalek Abdullah, on Saturday, called on the Egyptian army to intervene militarily in Libya, to do what he called “deterring Turkish forces” supporting the al-Wefaq government in Tripoli. Abdullah is a professor of political science at Emirates University, who is famous on Twitter and close to the ruling authorities in his country. Some media outlets define him as an advisor to Abu Dhabi Crown Prince Mohammed bin Zayed.

Egyptian backed Haftar forces suffered in the recent weeks with numerous defeats by the GNA, which declared the liberation of the cities of Tarhuna and Bani Walid and for securing all of Tripoli’s borders. The GNA, backed by the United Nations, was formed in February 2016 under the Skhirat Agreement. Haftar is supported by the UAE, Egypt, Saudi Arabia, France, and mercenaries from Russia, while Turkey supports the GNA forces.

The deficit in the balance of payments persists in Egypt

Egypt’s judiciary bans celebration of Rabbi Abu Hasira once and for...