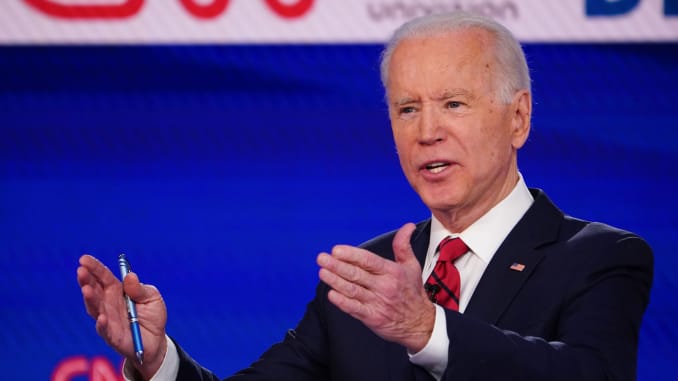 US Democratic Party presidential candidate Joe Biden denounced the exposure of Egyptian opponents such as Muhammad Amasha, Sarah Hegazi, and Muhammad Soltan to arrest, torture and exile from their country, Egypt. Biden also criticised threats made against the families of Egyptian opposition activists and confirmed that there will be no more blank checks for President Trump’s “favorite dictator,” as he put it. Biden was referring to the time US President Donald Trump was overheard during the summit of the Group of Seven industrialised countries in Paris last August referring to Egyptian President Abdel Fattah al-Sisi as his favorite dictator.

The newspaper said that in a luxuriously decorated room at the Hotel Du Palais Biarritz during the Group of Seven summit in France, the US President was waiting for a meeting with al-Sisi, and while he was waiting, Trump looked at a gathering of Egyptian and American officials, and called out loudly: “Where is my favorite dictator?” Witnesses of the incident said they believed Trump made the comment jokingly, but they said his question was met with absolute silence, and the newspaper was unable to confirm if al-Sisi was present at the time. Biden’s recent tweet raises the Egyptian regime’s concerns about the upcoming US elections.

US aid has continued unaffected despite international human rights criticism of the Egyptian regime due to the enforced disappearance, unlawful open detention, torture, and extrajudicial killings.

The most recent of these criticisms was the speech of US Secretary of State Mike Pompeo who said during a press conference on the evening of Wednesday July 8 2020: “We urge Egyptian officials to stop the unjustified harassment of American citizens and their families who are still there.” Pompeo made the remarks while he welcomed the release of American citizen Mohamed Amasha after his imprisonment in Egypt, but he called on Egypt to stop harassing other American citizens. Another American, Mustafa Kassem, died last January in a hunger strike. He was arrested during a visit to Cairo in 2013 as part of a crackdown.

President Donald Trump’s administration maintains close ties with General al-Sisi and commends him for combating Islamist activists and for his support for a peace treaty with Israel.

In an open letter last week, a group of foreign policy experts called on Pompeo to inform Egypt that cooperation between the two countries, including military assistance, will be at stake unless the government stops harassing US citizens, as well as Egyptian activists and journalists. These experts noted the continued detention of Americans, including Khaled Hassan, who was apparently tortured.

They also mentioned the Egyptian authorities’ reprisals against the family of Mohamed Soltan for filing a lawsuit in an American court against Egyptian officials. “Trump’s administration is trying to hold Iran and China accountable for their reckless and serious violations of human rights, we hope that Egypt will comply with the same standards,” said the working group on Egypt, which was sponsored by the Carnegie Endowment for International Peace. The working group added that “the continuous mass violations of human rights increase the potential for instability in Egypt and threaten US national security interests.”

Al-Sisi is taking advantage of the conflicts in Eastern Mediterranean to...