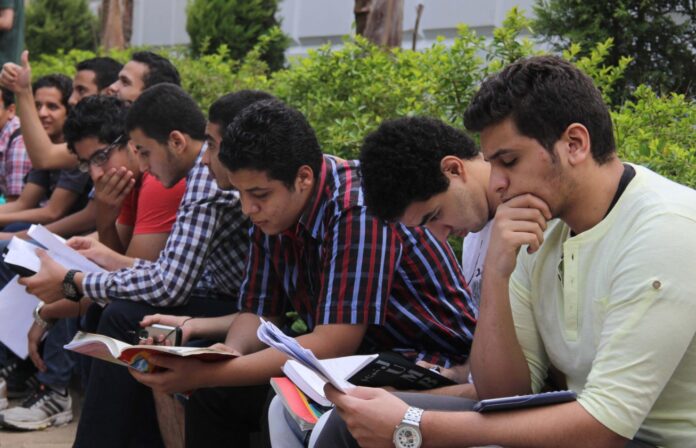 Although the Ministry of Education announced that changing the examination system and converting it to the electronic system prevented leaks that occur every year, these leaks happened again.

Tariq Shawky, Minister of Education, commented last January on the leak of exams, saying: “It is related to cultural heritage that needs to be developed in parallel with the educational process.” During the past years, the issue of leaks that affect the general secondary examinations has become the talk of the day in various Egyptian circles. It has become one of the primary subjects in the media and social media.

For his part, education journalist Hani Makkawi believes that “the process of leaking exams has become a systematic act during the past years.” He noted that the special committees for the sons of officers and judges were “the main reason for the exams being leaked.” Makkawi hinted that the head of one of the exams committees in Assiut was forced to apologise for continuing to supervise the committee after he witnessed systematic mass cheating and was unable to stop it.

The committee included many children of police officers, judges and parliamentarians, and the teacher apologised for losing control of it, and the occurrence of collective fraud. Meanwhile, the digital cheating pages continued to leak exams, and the most famous page, “Shaoming,” challenged education officials to prevent the leaks.

The continued leaking of exams demonstrated the government and Ministry of Education officials’ inability to address the phenomenon that has become inherent in all exams at most educational levels. In 2016, with the increase in the leaks, many parents expressed their discontent with the phenomenon and the government’s inability to address it, which leads to the loss of students’ efforts and the equal opportunities principle.

The discontent turned into a protest at the Education Ministry. Many parents and students participated. In conjunction with that, the prosecution decided to imprison 12 officials in the Ministry of Education pending the background of the leaked exams, while the Administrative Prosecution opened an urgent investigation. The cabinet also decided to form a committee that includes representatives from the Ministries of Defence, Justice, Education, and the Interior, to discuss procedures for changing the method of handling the general secondary examinations’ questions and answers.

On the other hand, the former Minister of Education, al-Hilali al-Sherbini, pointed out the difficulty of counting those responsible for leaking exams, with the participation of more than 80,000 employees and workers, between the exam makers and those responsible for printing presses and control, and transferring them to the governorates, and the heads of the committees.

Who is in charge?

The former Minister of Education admitted his request to shut down the Facebook site before and after the exams, and electronic jamming to combat leakage. In a speech to the House of Representatives, al-Sherbiny called for legislation to allow electronic jamming within the committees to prevent electronic fraud, saying: “We will not be able to confront the modern technology used by students without disrupting the entire school.” He explained that the concerned authorities rejected his request after it was found that “electronic jamming the classrooms only will cost the state 150 million pounds, and it will only cover 40 or 50 per cent of the school’s perimeter.”

Each time, with the renewed crisis, MPs in parliament hold the Minister of Education responsible, accusing him of failing to prevent these leaks. In contrast, some see it as a “breach of Egyptian national security.”

Through his arms deal did Biden disappoint Egyptian detainees?

‘The poor of the train’ exposes stark disparity between military commanders...