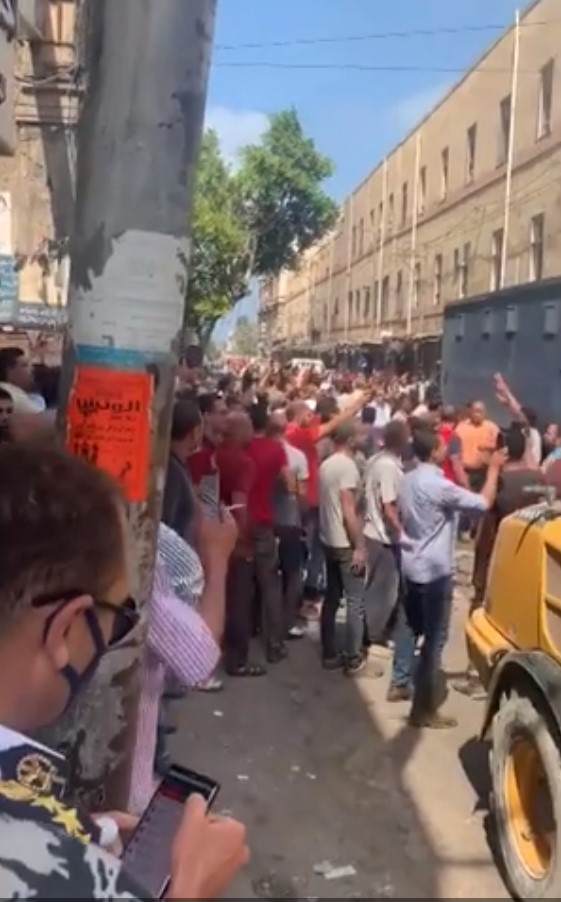 Years after disappearing, fierce public clashes with the police forces have returned, but this time the reason was not political. Public anger over the demolition of buildings and mosques turned into confrontations and clashes with Egypt’s security forces, which increased the campaigns’ ferocity to remove buildings it claimed violated licences over the past several days. Video clips in Qalyubia, Alexandria, and Assiut showed that people in villages and popular areas responded to the removal campaigns and clashed with the police forces and prevented them from demolishing the buildings. The police clearly retreated in the face of the people’s anger.

The citizens’ anger and the unprecedented state of tension coincided with calls for demonstrations and a revolution against the regime on September 20. It seems that these reasons have pushed the government to retreat from its violent measures and provide some facilities before demolishing the buildings. The anger took many forms, as shown in the circulating video clips, where a large crowd of citizens threw stones at demolition bulldozers and the security forces while insulting the police and chanting against al-Sisi and the ruling regime and demanding his departure. Meanwhile, the situation in Assiut and some parts of Upper Egypt reached an armed confrontation, and some residents fired heavy bullets in the air and threatened the forces carrying out the campaigns to remove and demolish buildings.

The spread of manifestations of anger among the citizens and their move to the stage of confrontation and clashes with the forces came days after the circulation of clips and pictures showing the displacement of people whose homes were demolished amid screaming for help during the demolition. The demolition of thousands of homes came after a threat to exterminate villages from the president, followed by the massive release of bulldozers and equipment. However, the reconciliation period in building violations, which extends to September 30, has not expired.

According to some news sites, reports issued by the National Security and General Security Service have warned of the possibility of widespread unrest in the Egyptian street if the violating buildings are demolished. It also revealed that the military institution advised the Presidency of the Republic to wait to close the door to reconciliation after the recent clashes with the removal campaigns and the security forces, in addition to the intense electronic campaigns against al-Sisi and his regime. Calls to demonstrate and citizens attacking police forces despite the state of severe repression and intimidation by the Egyptian people’s security services prompted the prime minister to hold a press conference to announce the easing of some measures.

Prime Minister Moustafa Madbouly granted governors the authority to reduce the value of violations in an attempt to achieve the required collection rates, but in a different way. The prime minister explained that the governors were instructed to take into account the social dimension, pointing out that the violating building after reconciliation becomes official, and its financial value will double. He pointed out that the number of submitted applications was not sufficient or commensurate with the violations’ size. Additional time will be given to citizens wishing to reconcile to complete the required documents. Madbouly added that random or unplanned construction represents about 50 per cent of all Egyptian cities and villages’ urban mass. He pointed out that from the mid-eighties until 2015, the random growth rate sometimes reached more than 70 per cent of the construction volume.

According to a government report published by the local media in September, the number of violating properties in Egypt reaches 2.8 million. The last count of violating buildings in the capital Cairo recorded more than 80,000, and in Giza, 129,000 buildings. Authorities removed 9,609 building violations within the urban space, and 20,447 violations based on agricultural lands, and referred to the military prosecution 12,641 citizens until last August.

Meanwhile, Egyptian activists launched more than one closed group on Facebook, including “No to the law of reconciliation… we have no money.” They recorded their objection to the law amendments on the one hand, and their inability to pay the amounts required for reconciliation and the fines contained in the law on the other hand.

Why does foreign investment escape Egypt?