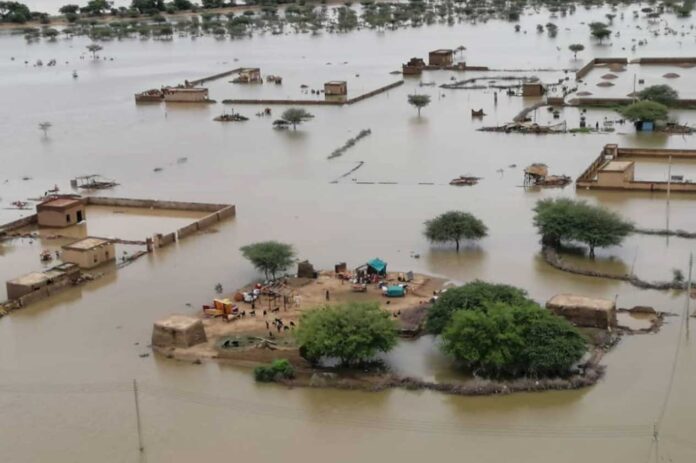 There is concern and anticipation in Egypt that Sudan’s floods will reach Egyptian lands after the devastating effects of the floods in Khartoum, which led to dozens of victims, the destruction of thousands of homes, and families’ displacement. Citizens in Egypt wondered about warnings over the arrival of flooding in days and the extent of the Egyptian government’s ability to deal with the floods. Questions and concerns have increased recently, especially after the rise of the Nile’s water levels in Egypt and the sinking of nearly 100 acres in al-Beheira governorate. Because the country was not prepared, the rise in the Nile’s water levels led to severe damage before that in areas such as al-Arish, Ras Gharib, and Alexandria.

Sudan’s floods caused the level of the Nile to rise in the Sudanese capital, Khartoum, to 17.48 metres, breaking the records set during the past 100 years, which reached 17.26 meters in 1946. Experts explained that these torrential waters are on their way to the southern Egyptian border adjacent to Sudan, where rainfall continues in most parts of the country at high rates. Floods damaged the states of the Red Sea, Kassala, the Nile River, the north, Khartoum, the island, Sennar, the Blue Nile, the White Nile, North, South, and West Kordofan.

The torrential floods left behind more than 100 people, while about 20,000 houses were destroyed, and 34,000 homes were partially collapsed, while the water inundated entire villages in the eastern regions of Khartoum. The floods caused the declaration of emergency in Sudan, and the circulating photos showed the scale of the environmental disaster that Khartoum is exposed to in light of a broad wave of sympathy from the Egyptians who expressed their solidarity with the Sudanese people through social media platforms and by tagging “From my heart, peace to Khartoum.”

Some experts in irrigation, water resources, and geology affirmed that Egypt has excellent opportunities to benefit from floodwaters if it does so with caution, by reviewing torrents, collecting water, and making use of it in the revenues of the Nile River. However, some have argued that Cairo will not benefit from Khartoum’s rain at the present time, but it represents a positive indication of the river’s revenue.

Dr. Abbas Sharaqi, Professor of Geology and Water Resources and Director of the Centre for the Development of Natural and Human Resources in Africa, confirmed that Egypt would not benefit from the rain falling in Sudan at present. Sharaqi expected that Sudan’s floods would reach Egypt in the coming days, noting that the recent rains are the same as the rains that Egypt witnessed at the beginning of the last winter season. Egypt was also unable to exploit them.

Concerns and warnings were appropriate. As the Nile flood reached Egypt, the water level rose to a large degree and flooded tens of acres in several villages in al-Behaira Governorate, in the north of the country. Al-Sawaf village, which is affiliated to the city of Kom Hamada in al-Behaira Governorate, was exposed to significant floods due to the high level of the Nile, which led to the sinking of more than 70 acres.

The flooded lands are considered from the grounds of the Nile River bank which is owned by the Ministry of Water Resources, which rents them to farmers for EGP 4,000 pounds per acre annually. For his part, Hani Raslan, the former head of Sudan and the Nile Basin Unit at al-Ahram Centre for Political and Strategic Studies, said in press statements that there is no need to fear a flood disaster in Egypt or any dangers threatening the country due to floods. He added that Lake Nasser, in which water collects behind the Aswan High Dam, will absorb any high floods, and if it becomes full, the Toshka spillway behind the dam will be opened to drain the excess water.

Some commentators in Sudan called to open the gates of the High Dam, in an attempt to reduce the size of the damage inflicted on Sudan and to drain floodwaters in light of accusations that Egypt did not move to mitigate the disaster by opening the gates of the High Dam. Some allegations that Egypt could have saved Sudan by opening the dam’s gates were answered by the Sudanese Minister of Irrigation and Water Resources, Yasser Abbas, who said in press statements that the opposite is true. If the Renaissance Dam is operational, it will protect Sudan from floods. He added that the High Dam Lake ends about 150 kilometres south of Wadi Halfa and the last stretch of the lake is north of Dongola, with a considerable distance, and therefore it has no effect on the flood of the Nile in Khartoum or the Makashi and Hazima areas in the northern state.