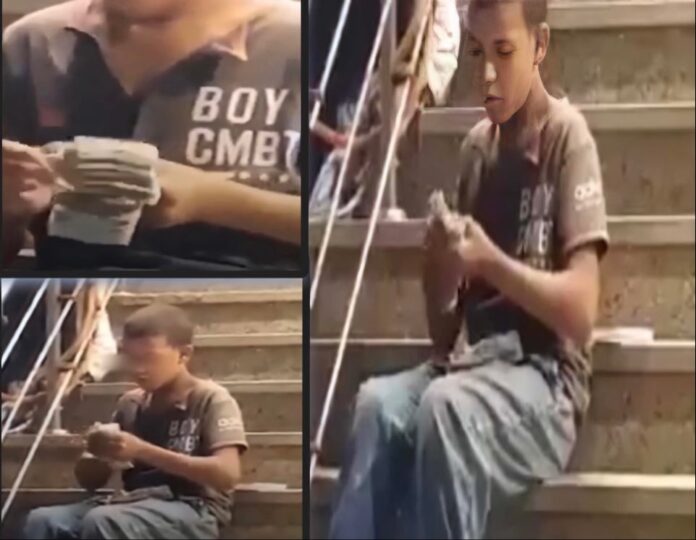 A video clip of a child beggar in Mansoura city, in the Governorate of Dakahlia, sitting to count a large sum of money (the proceeds of begging), aroused the resentment and ridicule of a large number of social media users in Egypt. Activists called on the police to intervene to eliminate the phenomenon of begging and the spread of street children, which some traffickers exploit to achieve significant profits at innocent children’s expense. The comments and posts showed the dissatisfaction of many people over the spread of the begging in Egypt, and the absence of any control or deterrence, as beggars are clearly and intensively spread in the streets, parks, and in front of schools and universities.

According to recent statistics by the National Centre for Social and Criminal Research, the number of beggars exceeded half a million people, most of them children, including about 15,000 in Cairo alone. There are many beggars inside tunnels, on pedestrian crossing bridges, and public transportation, amid the urgency of the beggars to make money.

Sociologists warn that the phenomenon of begging is a threat to society because it is linked to other crimes, ranging from child kidnapping to organising street mafia to controlling the proceeds of begging and theft. They say that they deal drugs rather than doing real work that benefits society.

The abuse of begging has become a quick way to enrich people so beggars are distributed to regions and revenues divided between mafias and their networks. The imam of al-Sayyida Zeinab Mosque in Cairo revealed in a tweet that a famous foreign bank employee was visiting the mosque when he saw a beggar in front of the mosque. The bank employee was surprised, told them that he was a client of theirs in the bank, and had about EGP 2 million in his account.

A month later, the story of the most famous beggar in Beni Suef (Kamil Bey) spread on social media, including that he was regularly visiting the National Bank, the Beni Suef branch. A bank employee reported that the older man, Kamel, who wears old robes, has more than EGP 3 million pounds inside the bank, and two buildings in the Haram area and Faisal in the Giza governorate. Gangs get high daily revenues, reaching extraordinary wealth, especially on holidays, through control over neighbourhoods and regions, in the absence of deterrent laws or police efforts to curb the phenomenon.

Instead, the police shifted from combating beggars to using them to confront demonstrations opposing the regime, and employing them in monitoring protest movements, according to observers. As for non-deterrent laws, Law No. 49 of 1933 of the Penal Code stipulated the specific penalty for begging. The law sentenced for imprisonment for a period not exceeding two months every person of 15 years or more who is found begging in a public street or public place. The penalty for the crimes stipulated in this law shall be imprisonment for a period not exceeding one year.

Causes of the phenomenon

The Crime Department of the National Research Centre, in a report in early 2017, monitored the statistics in the various governorates, and the report showed the increase in the number of beggars in Lower Egypt than in Qibli. The report stated that Cairo had about 14,400 beggars, the highest number. As for Alexandria governorate, there was some 9,000 beggars. In Giza there were about 7,600, in al-Gharbia about 5,800 beggars, and Dakahlia about 3,000 beggars. According to experts and specialists, there are many causes and motives for begging in Egypt, including the family’s economic situation, to going out to the street to escape home disputes, unemployment, and poor education.

The main causes of the spread of begging are poverty and hunger, as the Central Agency for Mobilisation and Statistics revealed last year that 32.5 per cent of the population is poor and cannot meet their basic needs of food and other things. Then there are other reasons for begging, mentioned by experts, such as school dropout and leaving education early, the spread of child labour, the spread of unemployment, the high standard of living, and the spread of drugs and addiction.