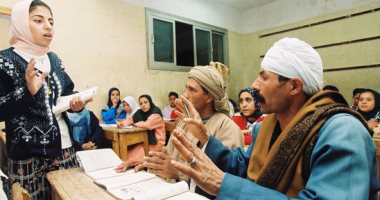 For many years, successive Egyptian governments have been raving about the fight against ignorance, illiteracy, and adult education. Still, government announcements, laws, and established bodies have remained mere propaganda with little effect in reality. The celebration of International Literacy Day comes in light of the high rate of illiteracy in Egypt of 25.8 per cent, according to the 2017 census, according to a statement issued by the Central Agency for Public Mobilisation and Statistics in September 2019. This high rate is due to several reasons, the most important of which is the lack of seriousness of the state in eliminating it in light of the decline in interest in education and health, its low budget, and the inability of teachers.

The literacy issue turned into a mere slogan without any realistic implementation, as the General Authority for Literacy and Adult Education was established in Egypt since 1991, while the authority does not own any educational buildings to this day, according to the press statements by the head of the authority. A statement by the statistics agency stated that the number of illiterate people increased to 18.4 million in 2017 after 17 million people were recorded in 2006. The statement said that illiteracy rates in Egypt during the period 1996 to 2017 showed that the most illiterate were females in the 1996 and 2006 censuses, and their percentage reached about 62 per cent of the total number of illiterate people. This percentage decreased to 57.8 per cent in 2017. The illiteracy rate in the countryside was 32.2 per cent, compared to 17.7 per cent in urban areas in 2017, and the rate decreased among young people (15-24 years) compared to the elderly (60-years and over), reaching 6.9 per cent for young people, compared to 63.4 per cent for the elderly.

Since 1967, celebrations have been held worldwide to remind the international community of the importance of literacy as a matter of human dignity and respect for human rights, and to emphasise the need to intensify efforts towards societies becoming more literate with reading and writing skills. Although the policies of the Egyptian Ministry of Education have resulted in adult literacy, many adults are excluded from education, and thousands of young people are dropping out of school. Many adults expressed their shame at being in a joint school with children to eradicate illiteracy, which led them to not complete their studies and leave school. The literacy certificate that the government required in a certain period to obtain some jobs also turned into a mere means of trading in simple people’s dreams. Many obtained it by paying money and not by literacy and learning in reality.

Education experts believe that the high rates of illiteracy in Egypt are due to widespread poverty and the absence of a sound educational strategy. The expert at the National Centre for Educational Research, Kamal Moghaith, criticised the Minister of Education plans, explaining that the problem of illiteracy is related to the provision of education itself. Mogheeth added in press statements that the solution to adult education problems is through qualified teachers, which he considered does not exist in Egypt, as there are only about 5,000 teachers in Egypt. At the same time, there are about 18 million illiterate people.

The sovereign bond law: Egypt expands its creditor base

Ahead of privatizing electricity: The Egyptian government hands over the electricity...